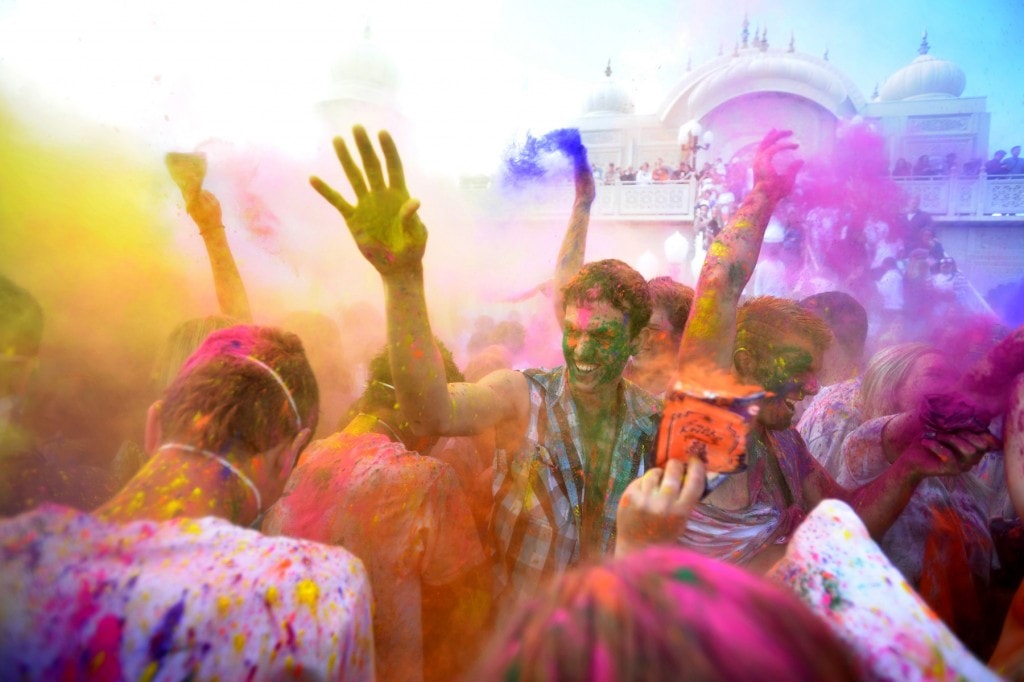 Co-opt: (v.) 1. divert to or use in a role different from the usual or original one. 2. adopt (an idea or policy) for one’s own use

The Color Run ™ and other similar ideas like Run or Dye™ is a fun way to run with your friends, come together as a community, get showered in colored powder so you don’t have to deal with all the annoying culture of going to an actual Holi celebration.

There are no prayers for spring or messages of rejuvenation before these runs.  You won’t have to drink chai or try Indian food afterward.  There is absolutely no way you’ll have to even think about the ancient traditions and culture this brand new craze is derived from.

Doubtless, you’ve seen posters advertising for the Color Run in your neighborhood—they’re the ones sporting happy white college kids covered in color.  You may have even paused for a second to appreciate the clear fun they’re all having as they enjoy a part of the desi culture.  But honestly, the Color Run does absolutely nothing to give credit where it’s due.  And to add insult to injury, they’ve trademarked out tradition.

According to Color Run’s website, there are only two “simple rules.”

1) Wear white at the starting line and

It would’ve been an original idea if Indians hadn’t been doing it for hundreds, if not thousands of years.

The race ends with a “Color Festival” (actually in quotes on the website as well). Sounds an awful lot like a digestible name for Holi. Sort of like how white people call Diwali the “Festival of Lights” even though this is a major over-simplification—I don’t think we just light a whole bunch of candles and call it a night.  Nope, we tell stories from the Hindu scripture, the Ramayana, share sweets and gifts, say prayers and welcome the New Year.

At Holi, we don’t simply throw colors in each other’s faces—it’s a place to play with people you love and revel in the vibrancy of spring.

One of our favorite and most colorful holidays is being (pun intended) white-washed.  Nowhere on the Color Run website is their mention of India, Holi, Krishna, or even spring.  It’s like we’ve been completely eradicated from this event. Apparently, this is a completely organic creation of the Color Run ™ head honchos, and they’re making loads of money from it.

There is a vague understanding that the Color Run pays out money to charities selected by their runners. However, I cannot find evidence on the website (or the Yelp reviews) as to where exactly the money raised from the runs and their store goes. I can’t even tell how much of every dollar donated goes back in the Color Run ™ administrative workings.  If the reviews are anything to go off of, it seems even the runners don’t have a clear idea where their donations are going.

So, our culture is being co-opted to turn a profit. But at least you can buy a pair of super cute shorts that say, “Color This!”

Hai Ram, if our dadis saw this, they’d be threatening thuppards all around.

I can bemoan the misuse of Holi, the profiting off our culture and the further sexualization of it, but worst of all, it doesn’t give us the chance to share Holi properly.  Personally, I love it when I can bring my non-desi friends to the annual campus Holi function.  I can show them a part of my heart and an aspect of my identity as a strong brown South Asian. But the Color Run robs me of that chance by giving everyone who participates a diluted (and completely wrong) version of desi culture.

With this Holi knockoff, they lose the culture and the tradition, but they keep our colors.