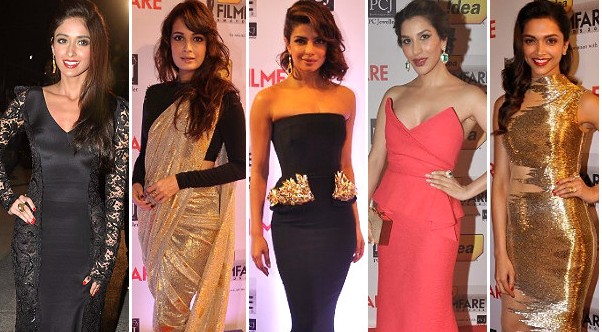 We all know last Sunday was the equivalent of Superbowl Sunday for Bollywood lovers all over the world. The 59th Annual Filmfare Awards show is full of glamour, glitz and fame, as stars lined up to dance on stage and take home their much-deserved trophies.

Ranbir Kapoor and Priyanka Chopra, who were quite the dynamic duo on stage, hosted this year’s award show, which is the Bollywood equivalent of the Oscars. Check out the big winners below to see how your favorites did and keep scrolling to take a look at my favorite outfits of the night!

Best Debut (Male): Dhanush for “Raanjhanaa.” (The actor who is most famous for his song “Why This Kolaveri Di,” cleverly stated he’s done 20 films in South India, prior to winning this award).

Of course with any awards show, the looks on the red carpet are sometimes considered more important than the real awards by itself. Here are my picks:

My hot picks of the night:

Priyanka Chopra looked so sleek in this Alexander McQueen gown. Her simple, swept hair is the perfect complement.

Amrita Rao pulls off the traditional and feminine look with some edge in her blouse with this Payal Singhal sari.

Diya Mirza takes a risk with this bold sari and PANTS. That’s right, pants. But it works because she keeps everything else simple and the gold sari adds the right effect.

Neha Dhupia shows-off her innovative style by pairing two different designers. The langha-like-skirt is by Anju Modi and the crop top is by Payal Singhal. We are loving the more sober colors for a look that  perfectly mixes East with West.

My not-so-hot picks of the night:

Now, I have feeling I’m going to get into a lot of trouble for this since every other fashion outlet is saying otherwise, but this funky Gaurav Gupta design is just too much in my opinion. If you’re going to with shining gold then no zagged edges please! Plus, those shoes look a bit severe. It’s okay, Deepika, you still won one of the biggest awards of night!

As someone who loves lace, I have to say I didn’t find this Emilio Pucci artfully done. Ileana D’Cruz, who usually looks flawless, disappoints in this number because this dress looks a bit frumpy and not well-fit.

Dear Prachi Desai, please pick beads, a bow, or  an open leg—all three together is not an option!

There you have it, our review of the biggest Bollywood film awards. Until next year!