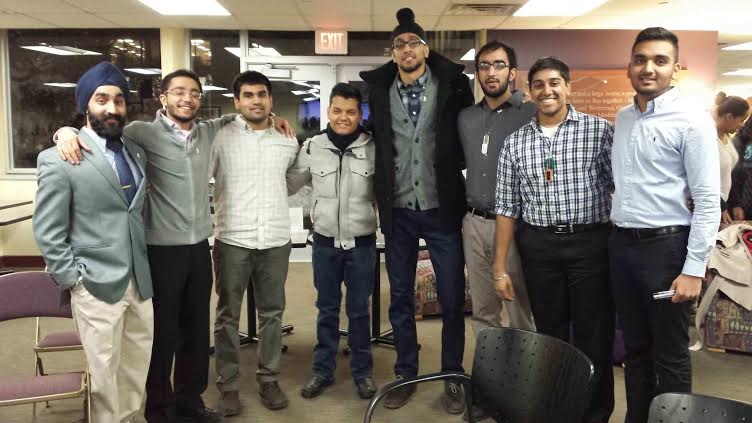 On Feb. 6, the first South Asian Greek lettered organization, Iota Nu Delta, at Boston University organized a “Sexual Assault Awareness: Empowering the Women of South Asia” event to raise awareness surrounding the troubling issue. With more than 50 students in attendance, the event consisted of watching a documentary “India, A Dangerous Place To Be A Woman” by BBC, leading to a discussion centered around both recent and past sexual assault incidents in India.

It’s important to highlight the need for more events that work to raise awareness on college campuses, especially those organized by young men. Many times we undermine the power of Greek organizations because of the many stereotypes they come with, but while we celebrate IND’s 20 year anniversary, it’s important we hold our fraternity to higher standards. It’s from here the mentality starts to change, so that our future generations can treat women in a different light. 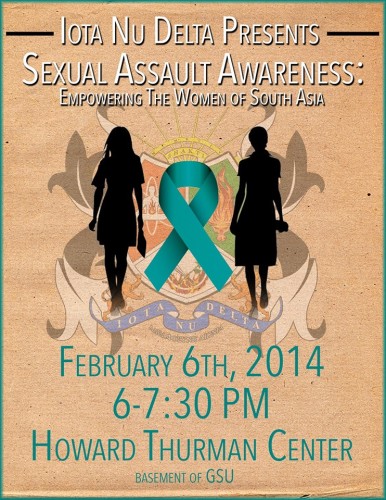 1. What was the purpose of your event?
Ankur Patel, Philanthropy Chair, Sophomore – Follow @AnkurP36

The purpose of the event was not to look down upon India or Indian men, but to educate people in our community about what goes on in India and how we can make strides to improve this issue. People in our own community do not know half of the things that happen around the world, and our goal as the first south asian fraternity is to bring awareness to the topic of sexual assault.

2. How do we change the culture of rape and assault in India? Is it the mentality of men we have to change?
Educate the men, and overtime this ego and thought of being superior to women will change. The focus should be on changing the way men think, and traditional thoughts because many men still feel like it’s the girl’s job to be aware and to display themselves as “respected” women. This is just wrong in all ways because these women should be able to live their lives without worrying about what men are about to do. It will be very long process as the new generation comes in, but it all starts with education.

3. What was the documentary, “India, A Dangerous Place To Be A Woman,” about and why did you decide to show it?
The documentary used was a great source and was in the view-point of a female from the UK, who had previously dealt with her own experiences of sexual assault in India. The documentary focused on different cases, and why the girls are looked down upon in India. We used it because it was indeed a great perspective and brought to light some small factors that influenced everyday life in India for a women.

After watching the documentary, there was a lot of discussion on the topic of how women are viewed in society in India and in western society as well. It was obvious from the documentary that women in India are held to completely different standards than men. Women in India are thought to be inferior to men. The documentary depicted how some parents are afraid of even having daughters because it is seen as a burden to have a daughter. Furthermore, it seems as if many men in India believe that they have a right to do whatever they want to any girl they see.

Most of these issues stem from its old ideologies. Society in India, on average, is not modern at all compared to Western society. Women today in western society are treated with much more respect and freedom. Although women in America have equal rights and freedom, there are still double standards that exist for men and women. Many times women are viewed in a much more negative way than man when considering sexual partners. Men are practically praised by their peers for being extremely sexual active, while women are criticized. Women in modern societies have made great strides in becoming regarded as equals to men. Until society in India let’s go of old ideologies, women will have a tough time being able to live as equally as men.

5. Is there an epidemic of sexual assault and rape in India because dating and sex are still considered taboos in Indian society?

Indian society still runs on old ideologies that looks “down” on women who date, party and are sexually active. It is sad to see some people in India blame victims of rape because in their minds their actions invited the maltreatment. Women who date and go out with friends at night are considered to be “disrespectful.” Even though many people in India blame women for acting indecent in cases of sexual assault or rape, there are also many incidents that occur when women are doing everyday activities. Men are deemed as more powerful and more purposeful than women in India, and there are many times when men commit such crimes because they think it’s okay and not harmful.

6. How has the first ever South Asian fraternity, Iota Nu Delta, make/or has made a difference in raising awareness? What more can you do as a fraternity?
Savan Parker, Treasurer, Senior

At Boston University, Iota Nu Delta has taken a pledge to raise awareness for this tragedy that is continuously occurring in India. When we set up this event, we talked to our school’s Sexual Assault Response and Prevention Center (SARP) to coordinate it. They were so surprised and impressed to find out that it was an all-male fraternity who decided to host the event. The biggest impact we can make to catalyst a change is to start at home. Collectively, as men, we should not tolerate any forms of hate and violence towards women, and this includes immature verbal statements. When only men are present in a conversation, they can sometimes act immature and say inappropriate things about women. In that way, we are passively condoning that behavior when we don’t step up and stop that verbal violence. 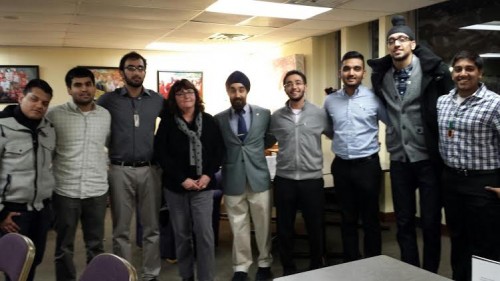 We want to spread awareness about the issue at hand. Rape and sexual assault are atrocious and India has notoriously been singled out as a hub for this occurrence. We want people to know that not every man is out there looking at women the wrong way. We want people to know that this issue in India stems from culture and education, and that change has to happen sooner than later. India is a great place to visit and the people there are amazing, but some people have seemed to forget this. We want to show people here in the U.S. that things are changing and that sexual assault awareness is making huge strides in India.

About Iota Nu Delta:
Iota Nu Delta is an organization comprised of men of many backgrounds, ethnicity and cultures. The brothers of Iota Nu Delta are men of integrity and honor, who strive to develop the person in his intellect, his involvement in the community and in his faith – his Mind, Body and Soul.

We attempt to create leaders among the diverse communities we live in. For that, we seek dedicated men of high caliber and strength to carry forth our flame and become a part of our family. Though we may all be different, we stand united under one name, one brotherhood, Iota Nu Delta.

Our 20 year anniversary celebration took place on Feb. 15 and it was the largest event in IND’s history with 500 brothers from all around the world gathered at one place. It was a time for us to say as an organization and what we’ve accomplished, but also a time build towards the future. Younger brothers met older brothers to learn from the past and gain perspective, but also to have a good time, while listening to old stories of their time in college.

Photos are provided by Abhishek Mundra.