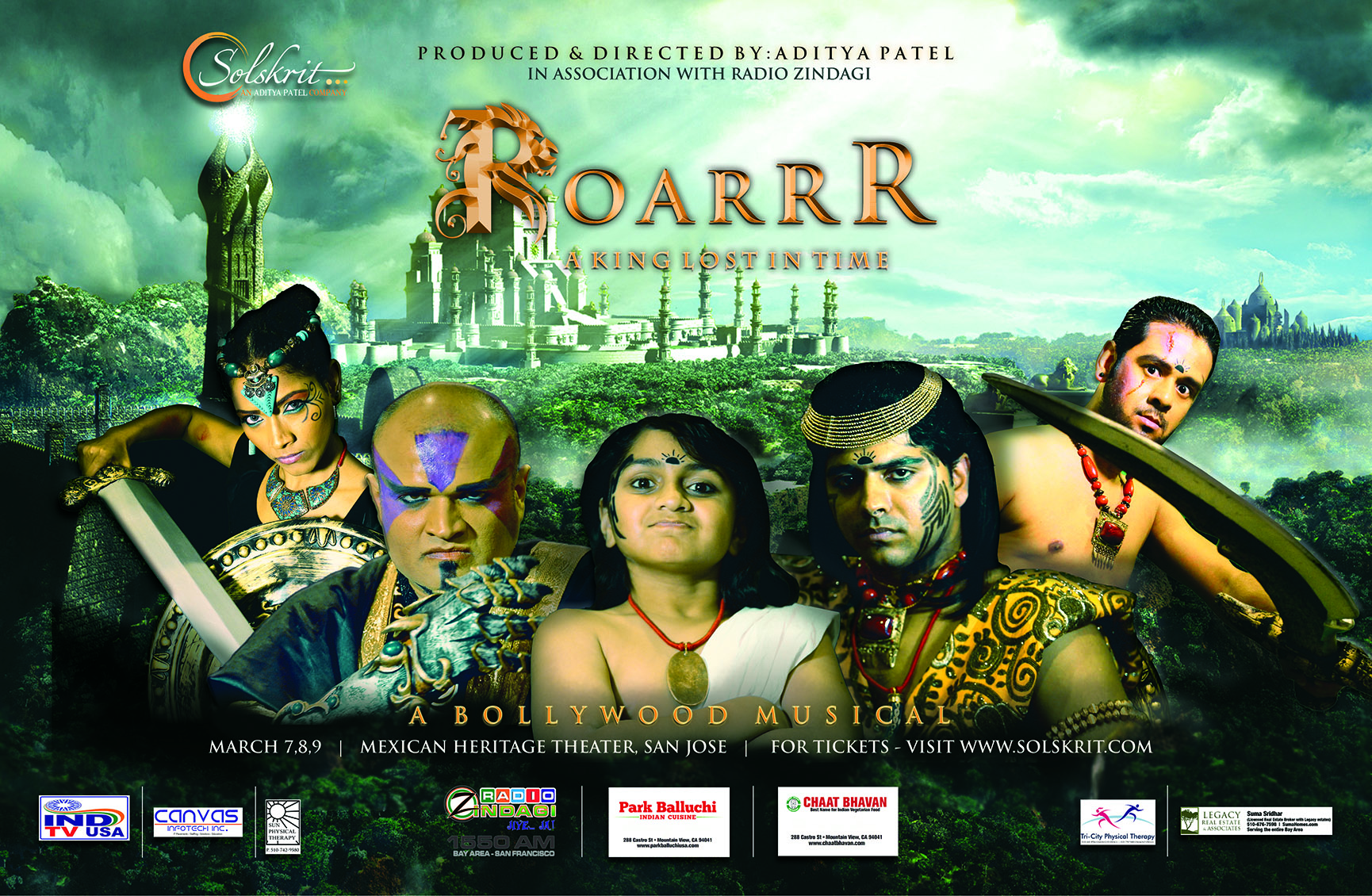 “ROARRR” performances will run from March 7 through March 9 at the Mexican Heritage Center, San Jose, CA. Known for their energetic and riveting dance & musical productions, Solskrit promises that “ROAR” will be everything you want to see in a musical, a heart- warming coming of age story with brilliant actors, foot tapping music and songs, and vibrant dancers.

Produced and directed by Solskrit’s artistic director and founder, Aditya Patel, “ROARRR,” is a theatrical extravaganza, a visually stunning Bollywood musical where live theatre meets digital entertainment.  A high-end production, which will showcase a three-dimensional world, an amalgamation of high-definition 3D spaces, Interactive Animation & Visual Effects, lavish detailed artwork, exquisite sets and costumes. The show will feature choreography ranging from Modern, Contemporary, Bollywood and Folk and the play will be replete with more than 100 actors, dancers and performers.

Patel shares his vision about the musical and its story:

We are going to take Bollywood musicals into mainstream American entertainment. We want to redefine Bollywood Musical Theater as a legitimate art form on par with famous Broadway plays by incorporating foot-tapping fast-paced Desi hit songs and dances into a heartwarming inspirational story- the best of Indian storytelling tradition presented in a live, accessible form for families from all backgrounds to discuss and enjoy.

This play is based on a universally inspiring story of how a child’s intrinsic character is formed by the care and example of parents and the bond between a father and child.This character emerges even in the absence of the parents, sometimes in the face of extreme adversity, and he may have to act larger than life, ignoring and suppressing his fears, to gain courage to laugh at hardships and win the struggle.

Thunder, like the ROAR of a thousand lions broke out in the sky and the blinding force of lightning struck the earth beneath. A great secret was hidden here. Evil was waiting with its greedy lustful eyes to lay its hands upon a Great Power, but the nearer it came, the farther it went. With utter disbelief and uncontrollable anger, Asura realized the truth – Mahaveer was still alive!!!

Mahaveer was born to one of the greatest kings the people had ever seen. His father was the guardian of the Secret and before he knew it, Evil began to play its brutal game. He was made to flee for his life and found himself alone in an unknown land . Will he survive as a nobody? Will he revoke his true identity? Will he challenge his past and accept what it brings? In his struggle, will he realize the real reason behind his birth… so that once again he can ROARRR.

Solskrit is a San Francisco Bay Area company focusing on producing extravagant high quality Bollywood Broadway Musical productions. Solskrit is the new venture of Aditya Patel and his experienced team of Gurus of Dance who are very well-known for producing 10 sold out Bollywood Musicals over the past five years.

To buy tickets for “ROARR,” playing at the Mexican Heritage Theatre from March 7-9, visit  www.solskrit.com or contact support@solskrit.com.