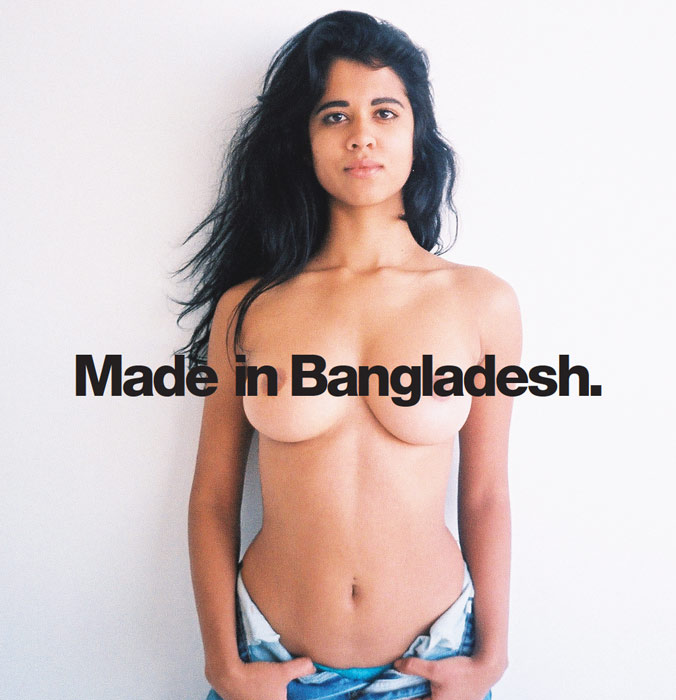 Jordan Alam is a creative writer from NYC. She is a  Muslim, Bangladeshi American woman who aims is to create “healing work” through the arts and activism. The response below explores the exploitation of a South Asian woman’s body used to construct dominant narratives about brown women as objects and how this form of exploitation links up with the white savior complex. Alam is also the founder and editor of As[I]Am, a pan-Asian American social justice online magazine, and keeps a blog at The Cowation.

The woman in the photo is wearing no clothes. She has light brown skin, lighter than me, and her dark hair is swept back in a wave. Her breasts are emblazoned with the message “Made in Bangladesh.” It’s not shocking to me – I too am a child of diaspora, an American Bengali or Bengali American, whichever you’d like. She does not share my mother’s well-lined hands or the dark skin my cousin diligently bleaches each day to look just a fraction lighter. Except for a single sentence presented by American Apparel, she is just as much a non-participant in the stories that get told about our people as they are.

These are the stories I have been told about my people:

Poor starving people. Poor polluted people. Poor corrupt people. Poor people who cannot rely on themselves and thus need NGOs to do their social service work – because any white person will do. But no one wants to talk about any of the reasons that underage women are moving to the cities in droves just to sit in front of a sewing machine and send money home. No one, not even the President, wants to talk about the big grave diggers wringing their hands at the scene of the factory collapse, Walmart – the largest retailer in the world – among them. That would take too much dredging up of history.

The only other context in which I hear of nude Bengali women is when they are being shown as sex workers. The fantastical image is of naked brown bodies strewn across brothel beds like waiting products to be consumed (not often accurate), but, to a white Western eye, how much further till they’ve reached the limits of their knowledge of Bengali people?

We aren’t given options for who exploits us. It isn’t a choose-your-own-adventure book – you can’t go to page two for the Western philanthropist who swoops in to save trafficked women or page 13 for the photographer/liberator paying this woman to take off her clothes. Liberal Americans of my generation only hear of Bangladesh as a place where people are destitute or just another set of violent Muslims. To be sure, the emphasis that is placed on the model Maks being a “former Muslim” tells us that she has made the leap: she’s not fitting the “conventional narrative” anymore. She’s come out of the darkness. The types of exploitation may differ vastly, but they all make our brown bodies into mannequins with moveable parts that only serve to make our voices even further unheard.

So this ad for me is not titillating, not liberating, and most certainly not a commentary that makes me want to buy more goods. Instead it reminds me that my body and the bodies of my family members will always be seen as objects for consumption – whether by individual sex tourists, exploitative philanthropy groups, or corporations out for cheap labor. This image, like all those catered to white eyes, speaks volumes about how my peoples’ stories are constructed by the American media. My only hope is that they can direct people to challenge themselves to move past the borders of their limited knowledge, and instead look to other resources where these women are not mannequins, and they speak for themselves.

For a very small sample, check out the work of Kalpona Akhter, a Bengali activist who organizes women working in factories for better pay. You can also click any of the links in this article for further expansion on these issues.