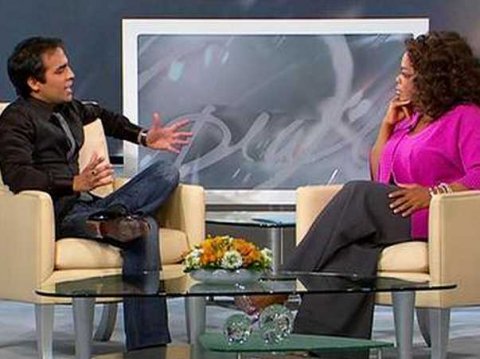 I’m so mad about this case that my brain is on fire.

RadiumOne CEO’s Gurbaksh Chahal dodges jail time for allegedly beating and kicking his girlfriend 117 times during a 30-minute attack last year. The mind-boggling attack was caught on tape via home security footage, but Chahal leaves this case with not one scratch on his back. He will not serve a single day or even an hour of jail time.

The 31-year-old ad tech entrepreneur, who sat on Oprah’s couch in 2008, where she gushed “he’s single,“ is not facing jail time, but thanks to the media, he will face shame and regret.

Chahal was arrested for the attack in August at his San Francisco penthouse apartment. According to The Huffington Post, his girlfriend told officers she couldn’t breathe and Chahal allegedly threatened to kill her four times. Despite the evidence from the tape and physical evidence on the victim, Chahal only pleaded guilty to misdemeanor domestic violence and battery charges, rather than the original 45 felony counts.

So how did all of this happen? Basically, Judge Brendan Conroy said the video footage of the attack could not be used as evidence because the police seized it from Chahal’s apartment without waiting for a search warrant. That may seem like a dumb move on the police officer’s part, but their argument was that the tape would have been erased by the time the judge-issued warrant would come in.

More puzzling is that after Chahal posted his $1 million bail and hired attorney James Lassart for his defense, his girlfriend stopped cooperating with police and no longer wanted to testify against him.

So basically, Chahal bought his way out of the case and it’s unclear why his girlfriend pulled back.

It’s times like this that the justice system baffles me. Since I worked as a crime reporter in college, I learned the ins-and-outs of court cases and the police’s procedure in handling such cases.  The law makes sense to me, but so much went wrong with this case and the judge’s decision.

At the age of 25, Chahal  founded and sold two advertising companies for multi-million dollar deals. He also founded the BeProud Foundation with $1 million of his own investment. The once bullied entrepreneur said he designed the foundation to create awareness and stop future hate crimes.

He was even named one of America’s most eligible bachelors by ExtraTV. By the looks of it, he seemed like a successful and a generous man,  but obviously this news changes that image big time.

The worst part about this entire case is the aftermath. As one of our Brown Girl Magazine Facebook fan said, since Chahal is free from such a terrible crime, he probably believes he is above the law, which could lead to him attacking more women. It’s sickening to think that there are people in the world who believe it’s sensible to act this violently, regardless of the situation he was faced with. I hope Chahal faces some punishment within his company, but as of now, he is still listed as the CEO of RadiumOne, a social retargeting firm.

Chahal moves forward in his life with gusto, and if you don’t believe me, just check his Twitter feed to see all of the inspirational and motivational quotes he tweets.

“There is nothing to fear in this life – it’s just an illusion we have told ourselves.” http://t.co/Z8wKOiapaC

10 Traits that will Define Your Success: http://t.co/Z8wKOiapaC

Update as of April 28: It seems as though there will be at least some punishment for Gurbaksh Chahal. TechCrunch reports that RadiumOne’s all-male board of directors fired Chahal and he will no longer be CEO or Chairman effective immediately. Before Saturday night’s official announcement, Chahal wrote a post on his blog, titled “Can You Handle The Truth?,” in which he tried to defend himself by saying he lost his temper when he found out his girlfriend was allegedly having unprotected sex with people for money. He then accused many of his haters for only attacking him because of his ethnicity, social class and gender. While spiraling down a dark path, Chahal has succumbed to Twitter comments by responding to his critics with defensive and insulting tweets. I think now is probably the best time he keep quiet and disappear into the shadows. It’s only going to get worse from here.