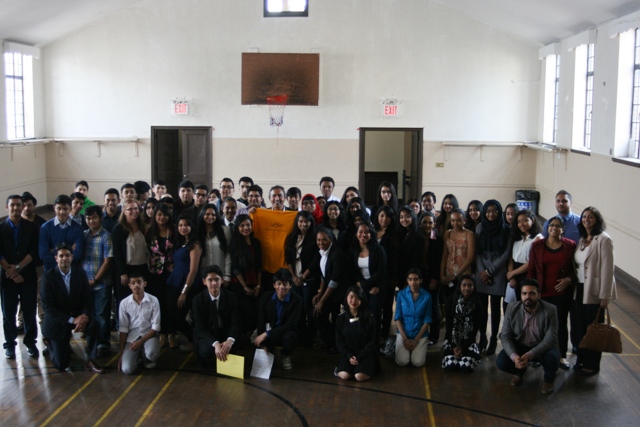 U.S. Rep Ami Bera (D-Cali.), the only Indian-American in Congress, spoke to a group of teens at a South Asian Youth Action conference in Elmhurst, NY. On March 22, Bera discussed the importance of political awareness in the American political process.

“It’s essential that we work together to help our young people dream big.” Bera told the Daily News. “You never know if there might be a future congressman or woman in the room.”

He spoke to the youth about his experiences in Congress as well as his background in medicine.

Bera, a physician by trade, is the U.S. Representative for California’s seventh congressional district. He won against the long time Republican incumbent Dan Lungren. Before he was elected to office, he was chief medical officer for the Sacramento County hospital system and the associate dean of admissions and outreach at the University of California, Davis.

SAYA!, a nonprofit group based in Queens and Brooklyn creates opportunities for South Asian youth by empowering them through culturally sensitive programs, organized the conference as a part of its High Chais. According to the website, High Chais are an essential part of their career readiness program that expose youth to new career paths they otherwise wouldn’t know of.

SAYA! specifically targets low-income South Asian teens that face challenges, which can hamper their ability to succeed in school or in the community. SAYA! hopes to get young South Asians interested in public service by setting up conferences and organizing trips to the nation’s capital.

There are currently more than 3.4 million South Asians living in the United States. According to the census, the South Asian community grew more than 81 percent in the last decade. Research conducted by Lake Research Partners concluded, 48 percent of eligible Asian American voters turned out for the 2008 election, roughly representing 2 percent of the electorate.

South Asians in the past decade have gained significant presence in the political system by running in statewide and national elections. Two Indian-Americans, Bobby Jindal and Nikki Haley, have successfully won the gubernatorial elections in their respective states. There have been four South Asians sitting in Congress, including Bera, along with a few representing local offices across the states.

In spite of their growth, South Asians fall behind other groups in terms of political participation. This could be attributed to a various number of reasons from voter mobility to a lack of political awareness or interest.

South Asian parents push their children to focus on schooling and obtaining a successful career, but many don’t voice the power of government and political participation. Since the South Asian population has grown more than 80 percent growth in past decade, it makes sense to engage more young South Asians and focus their attention towards public service.