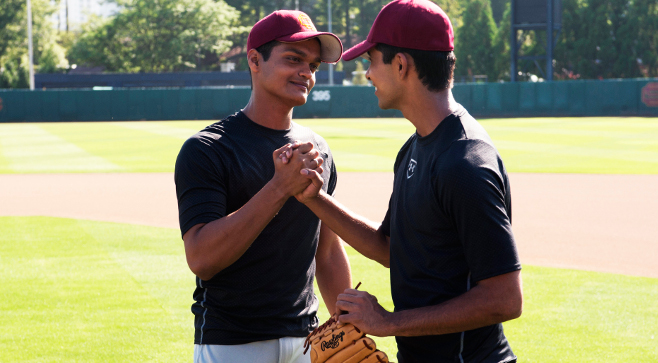 Walt Disney Studios released a new film titled “Million Dollar Arm.” If you’ve heard of it then you already know it’s about the true story of baseball pitchers Dinesh Patel and Rinku Singh. The duo were discovered by sports agent J.B. Bernstein after winning a pitching competition, which was hosted by a reality show in India called “Million Dollar Arm.” The sports agent hopes to teach Patel and Singh the sport of baseball and hopefully get them to the Major Leagues. The film takes place in three locations: Mumbai, Atlanta, and Los Angeles.

The film’s score is composed by none other than A.R. Rahman. This fact alone makes ‘Million Dollar Arm’ a musically thrilling must-see. While A.R. Rahman may have you dancing in your seat the acting cast will have your eyes glued to the screen. The actors playing Patel and Singh are the talented Madhur Mittal and Suraj Sharma. If those names aren’t ringing any bells let me refresh your memory.

Mittal was apart of the Oscar award winning film ‘Slumdog Millionaire’ in 2008, in which he played the character Salim. Sharma debuted into the world of acting, by playing the titular character named Pi from ‘Life of Pi’. ‘Million Dollar Arm’ will be his second venture into filmmaking, and we are really excited to see his performance!

The conception of ‘Million Dollar Arm’ began with two brothers named Neil Mandt and Michael Mandt who actually documented the original baseball players Patel and Singh as they trained to play baseball at the University of Southern California. They used their footage as the basis to gain interest in the duo’s story and create a presentation to pitch to producers. In 2010 the short nine-minute film they produced would be bought by Walt Disney Pictures, and between 2012 and 2013 the cast was chosen and filming began.

Take a look at the trailer, and make sure you go out and see it! The movie is out in theaters May 16th, 2014. Let us know what you think!