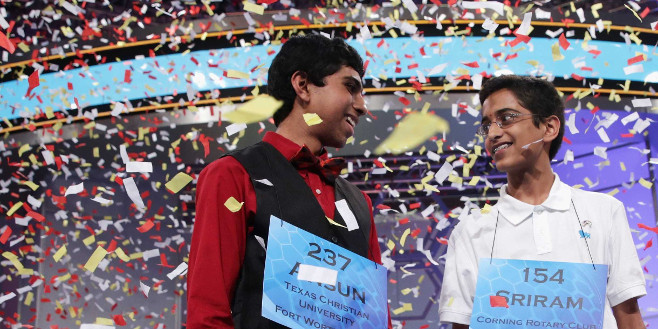 The following post was originally published on The Unholy Cow.

Like they did after the Boston Bombings, or after an Indian American won Miss America, or after two Indian Americans tied for the National Spelling Bee last week, racists on Twitter began offering their $0.02. 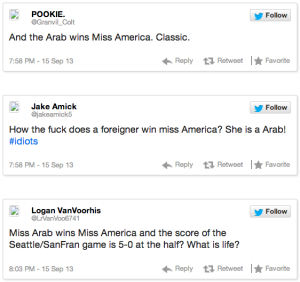 So here’s my letter to the Twacists and racists, thanking them for their well wishes:

We saw you ranting and raving on Twitter, about how you guys are #TiredofIndians, and about us stealing your tradition and heritage. So we came here to tell you we’re sorry. You can have the spelling bee back. Truth is we’re kind of over it. Winning it 8 years in a row is getting out of fashion, and winning any competition called a “B” for 13 of the last 17 years isn’t really good for our academic reputation either (if you know what we mean).

What’s that? You didn’t know we’ve been here for that long? Yeah, actually, we’ve been squatting here since 1850. I know: WTF, OMG, FML, SMH, right? Since then, we’ve built the railroads, worked the lumber mills, and toiled the farms. So yeah, after living here for 165 years, we thought it’d be okay to start entering beauty pageants and spelling bees too. And, since you obsess over us, you should also know that, we didn’t just win Miss America. It turns out we’ve won Miss Universe, Miss World, and Miss Earth also.

“TWACISM? CAN YOU USE IT IN A SENTENCE PLEASE?” First they took our beauty queen title then they take our bee. #twacism 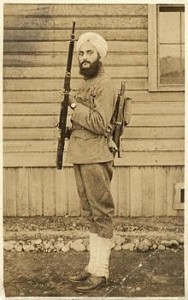 Became a sergeant in the United States Army.

You said his “character was excellent.” Then after the war, he asked you if he could be a citizen, and you flipped him the bird. So when he went ahead and finally became a citizen, you took it away from him 4 days later. Of course, he went ahead and got it back again, because that’s what annoying brown people like us do. And of course, you went ahead and took it away from him yet again, because that’s what bitter racists like you do. What’s that, you say? Did he finally give up? Nope. But you did. He died in America, a veteran, and a proud citizen of the country he served.

“TWACISM? CAN I HAVE THE DEFINITION PLEASE?”

Twacism is the hateful garbage you produce on twitter masked as free speech.

You remember Balbir Singh Sodhi, don’t you? Brown guy? Turban? About yay-height. (I know, I’m sorry, I just had to! You look so cute when you’re confused), Ok, I’ll give you a hint. Balbir Singh Sodhi. you shot him to death after 9-11. 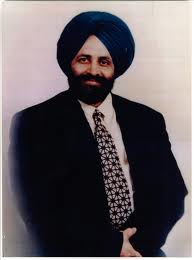 Now do you remember him?

What’s that? That’s not a hint? You shot a lot of people that day? OK, let me be more specific. Gas station owner, was planting flowers, gave candy to kids and food to the homeless. Was buying an American flag for his shop. Remember him now? After you killed him, you realized you screwed up when most Americans said of him, “I have lived here all my life. I hope I can be as American as you.” You screwed up when you killed six more of us on a Sunday in August of 2012. Do you remember that?

We were praying inside of a temple, and you killed us thinking we’d die. Silly you! From that, you have only made us stronger, You have only brought us closer together (which we needed & we have a long way still to go).

“TWACISM? CAN I HAVE THE ORIGIN OF THE WORD PLEASE?” Twitter, since 2006, and racism, since ad infinitum. But you are its fuel.

You see, you are not new. We’ve fined tuned this song for the past thousand years, Frankly, we’re used to it, and we don’t take it personally. We’re still friends with the Persians, the Greeks, the Chinese, the Arabs, the Portuguese and, our favorite, the British. We welcomed all their invasions with open arms, showed them chess, and yoga, and zero, and decimals. We showed them algebra, and calculus, trigonometry too. We let them rule us, and conquer us, and “civilize” us plenty, until they all gave up. Because we never do.

Thank you also for having confidence in us. Coming from the largest democracy in the world to the oldest, we were a bit scared. But you were so hospitable, daring us into becoming politicians and judges, authors and CEOs, and yes, your personal favorites, running 7-11s and motels. Your taunts kept encouraging us to keep innovating, to create Hotmail and Bose speakers and Pentium chips, to create fiber optics and wireless communication so that the cell phones in your hands could be used to one day mock us while you sat in your living room watching us on TV. Of course, it works out for you too, because when you accidentally shoot yourself in the head the next time you’re aiming for us, yes, it will probably be us too in the operating room, pulling the bullets out from the depth of your half-brain.

You’re right. Our names are difficult to pronounce, an “s” before an “r”? WTF? So yes, maybe that makes it easier for us to spell words like Laodiciean and naidel and feuilleton at spelling competitions, instead of asking us to spell words like jungle or shampoo, sugar or shrub, pajamas or orange, rice or bong. Because, you see, asking us to spell those would be way too easy, especially since we invented those words. But we realize it’s shocking, isn’t it? That “foreign kids” (one from Painted Post, NY and the other from a Christian university in Fort Worth, TX, as white American as they come), are winning English spelling competitions, even though they look like they’re “from India,” which is the largest English speaking country in the world. Haha. Who knew? Oh yeah. We did. But don’t take it personally. As we told you that night, we were competing against the dictionary, not against you.

So here’s the deal. Since you never did find us in 1492, we thought we’d come over and save you the trip. So here we are. We’re 1 in every 6, You’re probably like 1 in every 60,000. According to this math, (which we’re pretty good at BTW), you’re gonna be seeing a lot more of us. So it’s best we all quit whining, and start getting used to this living arrangement we all call America. Since neither of us is leaving anytime soon.

But if you still insist on shooting at us with guns, and assassinating us with your tweets, keep firing away. Because in the words of Apu, your favorite Indian on TV, “Listen, I’ll die when I want to.”

Lalit is a trial lawyer and writer living in Los Angeles. He is a former prosecutor with the Los Angeles County District Attorney’s office where he tried numerous felonies to verdict including violent hate crimes. You can follow him @LKundani or his blog The Unholy Cow.