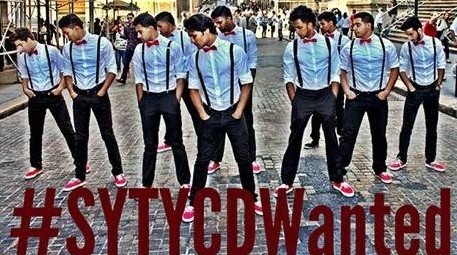 Imagine having Justin Beiber announce you to millions of viewers on national TV? Well, that’s exactly the opportunity the dance group Wanted Ashiqz experienced on June 11 when the team’s audition tape aired as a potential contender on FOX’s So You Think You Can Dance?  Since then, thousands of fans across the nation have sent countless number of tweets to help the dance troupe make their way for a live performance on the show. The four competing dance groups will see the much-awaited results tonight at 8 /7c on FOX.

Dance and music for many South Asians are embedded in our DNA and one group is a testament to that. The Wanted Ashiqz’s are an accomplished group of trained all-male dancers, who are well-known to fuse Bollywood and hip-hop dance styles along with fearless humor and athleticism, to create spectacular displays of dance and entertainment.

The group is known for its unique ability to merge the art of storytelling with intricate choreography from various genres of dance. Possibly the most famous South Asian dance troupe in America, the Wanted Ashiqz have performed in endless concerts, films, weddings, commercial shoots and national events across the country and world.

Under Artistic Director Ashif Gazi, the Wanted Ashiqz’s have been national champions in the South Asian competitive dance circuit and have won many distinguished awards throughout the years. Some of their most memorable wins are from 2009 when they became the best Bollywood-fusion dance team in the nation to win first place in the Best of the Best dance competition in California. Shortly after, they won the nationals in 2010 and became the first ever champions of the Bollywood America dance competition. In 2011, they went on to become the first ever Bollywood team to not only compete, but also win second place, along with the best costume, best theme and the crowd’s favorite at the prestigious World of Dance, a renowned Hip-Hop competition.  In 2012, the Wanted Ashiqz added to their accolades by becoming the first ever Elite 8 Naach Invitational-only dance competition’s champion, and once again winning second place and best costume in the World of Dance Hip-Hop competition. Recently, they won first place three consecutive times, becoming the first Bollywood team to compete and win at Prelude New England 2014, a prominent hip-hop competition.

Ahilan Sinnathurai, a long-time member of the dance troupe, gave BG exclusive insight to the group’s dedication and success.

Every time the Wanted Ashiqz perform, it’s not for the trophy or the cash prize, but for the sheer thrill and entertainment of what really matters – to entertain and win the hearts of the audience,” said Sinnathurai.

What is the mission and vision of The Wanted Ashiqz?

Our mission is very simple, to entertain. What drives and inspires us as a team is the love and support we receive from our supporters. Our vision is to introduce to the world the element of Bollywood fusion. We want to fuse together the vibrant and rich heritage of our culture with the intricacy of hip-hop technique to create a style of dancing that reflects who we are as a team.”

What is the hardest part of being on a dance team?

The most difficult part is balancing our passion with our everyday lives. We have a wide array of dancers, some in high school, college and others have full-time jobs. Bringing everyone together under one roof for rehearsal is a challenge because of the different schedules everyone has. Being on a dance team means we have to make sacrifices with our family, relationships and friendships.”

How does the dance troupe prepare for its performances?

Our preparation tradition is very lengthy. It ranges from serious 12-hour practices to joking around at a teammate’s house while we piece together our production. Wanted Ashiqz has many elements to its performance. Aside from our choreography, we are known for building grand creative sets that show our theme and designing. We even make our own intricate costumes. There is a lot of work that goes behind the scenes and during the days leading up to our performance are usually revolve around our production. We also have a ritual where all the team members gather around in a circle and tell us their favorite Wanted Ashiqz memory. It is quite touching to hear the love and passion we have for this team and one another.”

Share some memorable performances the Wanted Ashiqz’s have experienced:

One of the most memorable performances for WA was the World of Dance 2011 competition. That year was a crucial year for our team because some of the events leading up to that competition were unfortunate and tragic. Our creative director lost his father a few months earlier and our technical director lost his house to a fire two weeks before the competition. It was a difficult year for our team, but we still managed to come together and create history as the first Bollywood Fusion team to place at World of Dance. It was a monumental moment in our team’s legacy.”

The Wanted Ashiqz’s have relentlessly competed in dance competitions for years and now they have the rare opportunity to compete  on FOX’s “So You Think You Can Dance?” What kind of preparation went into such a big feat?

We can’t even begin to put into words how much preparation goes into an audition with Fox’s SYTYCD. SYTYCD is the most prestigious and respected platform for a dancer. The amount of talent that is on that show is unbelievable. While preparing for the audition, we faced a lot difficulty in deciding what to put together to show America. We wanted to make sure our choreography was the perfect blend of our South Asian roots and our passion for hip-hop. We had countless late night practices, discussions that would last hours and a lot of work piecing together what we wanted to present.

We are the first Bollywood-fusion team to be featured on the show and we want to redefine the perception of Bollywood. What we aim to bring to the show will eventually pave the way and open doors for South Asian teams across America, but it begins with this one monumental step. We are humbled and blessed to have received this opportunity and we aim to make the most of it, not just for this team but for our culture!”

While your team waits for tonight’s results, share the reaction of friends, family and fans thus far?

The reaction has just been so surreal. It is touching to see so many people have rallied behind us. Our friends, family, and fans have been along us through everything we’ve been through. The genuine gestures we’ve seen over the past few days is touching and it made some of us emotional. After seeing us on TV, it gave all of our well-wishers a rushing sense of pride and we are humbled and beyond thankful for everything they have done and continue to do for us. We couldn’t have been more blessed.”

Regardless of tonight’s results, I just want to take this opportunity for the entire WA family, to express our sincere gratitude. No matter how many Facebook statuses or Tweets we put up, we won’t be able to articulate what you ALL have made us feel in the last six days and how much we appreciate your support. We were never big on PR or marketing and we don’t have many followers on FB or Twitter, but this week, everyone made us feel so loved! Someone on WA was always reading the statuses/tweets and sending them to the rest of us who were stuck in work/school, which made us feel so special! Whether we get to perform on SYTYCD, these past six days put so much into perspective. You guys made us feel WANTED.

Not all of our families are very supportive when it comes to dancing, but they were all so proud of us and helped us beyond words. Our friends and loved ones showed us why they are the greatest in the world. All the dance teams showed that we could always come together as a community and support one another. The big dance companies showed us that not everything has to always be about business and money. Thank you for giving us hope and a fighting chance against the best. In short, going forward, WA hopes to continue entertaining and making you guys proud! THANK YOU!

All images were provided by the Wanted Ashiqz.