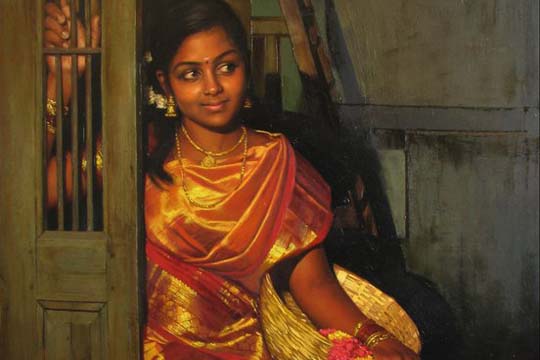 For many days, as I prepared for my trip to India, I was bombarded with friends, co-workers, and people who barely know me expressing how excited and jealous they were that I was getting to visit such an amazing country.

On Facebook, I had many friends also preparing to travel to Delhi, Bangalore, Chennai, who were ecstatic, barely able to wait for the trip, and unable to stop posting about how happy they were when they finally arrived.

I smiled my way through conversations for weeks, but on the inside my dread grew deeper and deeper. Not matter how you sliced it, I did not want to go to India and the fear was paralyzing.

When I was little, I used to look forward to the rare three months in the summer when I could spend time with family, dress in amazing clothes, wear heirloom jewelry, and visit inspiring landmarks, temples, and churches.

Now a two-week trip had me waking up in nightmares and crying every time I saw my boyfriend, as if I would never see him again. I had no way to explain this fear to my well-wishers, except to maybe mention how overbearing my family is, but whose family isn’t?

Now that I am here, the anticipatory dread has subsided, but I am miserable as predicted. For the past ten days, I have wondered why the mere thought of being here made me sick to my stomach. Why packing my beautiful saris and salwars depressed me? Why sorting through jewelry angered me? Why talk of trips to temples annoyed me?

It was only after many days of thought that I think I have figured it out and the fact that it took me so many days perhaps speaks to the problem.

Simply put, sometime after I leave New York and cross the International Date Line, I cease to be a person. I am no longer a writer, no longer a sci-fi fan, no longer a blue liberal Democrat. At that point, all those things vanish and I become just a daughter, a granddaughter, a niece, a girl, not really a women at the age of 30 since I am still unmarried.

When we land in India, the difference becomes stark. My brother does nothing differently than at home, but I need to instantly transform. I have to dress the part every day, sometimes having to change two or three times between salwars and saris. I have to make sure my ears, neck, and wrists are adorned with jewelry or I face the wrath of my family members who say I am naked.

I am expected to serve others at the table.

On the flip side, when I get up to get myself water, others insist on doing it for me. I can’t eat an orange without being put to scrutiny or others offering to peel it for me. And point of fact, other than getting water, there are few things here I can do for myself.

Even if I wanted to make myself a cup of coffee, it would be a near-impossible chore hampered by the fact that no one has an interest in helping me learn how to do it, where the grounds are kept, what to boil the water in, how to filter the coffee. They insist on doing it for me and seem impressed (or maybe baffled) that I manage to cook for myself back home.

Most conversations revolve around food. Have I eaten yet? Do I eat this or that? Don’t I want to eat something?

I am not asked my opinions. I am not included in conversation about politics or gossip or the latest movies.

When I meet anyone, I greet them in Tamil, but there are still people that I have seen year after year who seem to forget I can understand and speak it. They turn to the nearest relative and express surprise. “Oh, she can understand me?” This is rarely every said to me directly. I am not a person to be talked to.

The day I started writing this piece, I took a break for dinner. A close relative sat next to me at the dinner table and proceeded to ask my cousin’s new husband what some woman’s job was, and what her degree was in. I sat next to her listening for several minutes before I realized, stunned to the core, that she was asking about me. A woman I had known my whole life sat next to me and then genuinely asked a brand-new in-law what I did for a living.

For all this, I come from what I would consider a progressive family. In fact, others have said how impressed they are that the men of my family join the women in serving food, rather than sitting around and letting the women serve them. Every woman in my mother’s generation is college-educated, and even some of my grandmother’s cousins earned doctorates in a time when American women were marching for suffrage. When a cousin recently said he wanted to find a wife who wouldn’t work outside the home, my family laughed at him.

Yet, when I come here, I am no longer myself. I’m just another girl who needs to dress and act the part and be looked after by her family. Even my parents, who haven’t had to support me financially for years, suddenly seem concerned about everything I do, giving me instructions on everything from how to open airline tray tables, to how to work an elevator, to how to take a shower. Never mind that I’ve been on over a 100 planes in my lifetime, that I’ve frequently used Indian “lifts,” and that even in America I took bucket showers until I was in high school.

And forget about trying to leave my house without a male family member accompanying me. When I was younger, I never noticed, but now it’s much easier to see the utter lack of women walking in the streets if it’s not time to go to work or time to leave work. Men rove in packs here, fill the stores, and stand on street corners “sighting” women. Ten years ago, it angered me that I couldn’t go to the corner store and buy things like I did in America. Now I wouldn’t dare think about it.

I know that when I return home, my heart will smile when I sit in my car again, go to the grocery store again, cook the food I want to eat in my own kitchen, finally see Godzilla at the theater, talk to my friends about the latest environmental issues, and do and say everything else that defines me. I won’t just be someone’s granddaughter or niece to be looked after and protected., trapped inside, and unable to do anything but look pretty.

I’ll be a person again.

Next Up, Bangkok: The Honeymooners’ Series