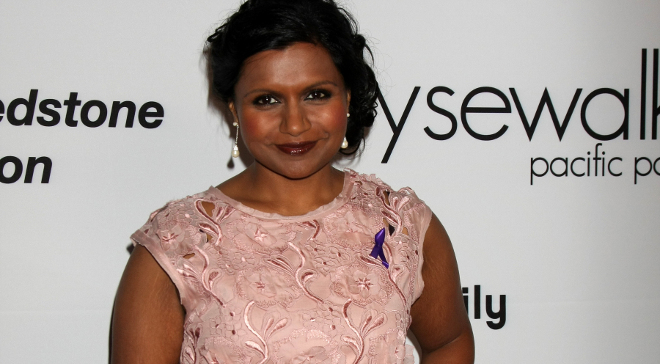 We all know the lovable Mindy for creating, writing, and starring in her own prime time sitcom on a major network, but more importantly, Mindy, as a brown girl, is an inspiration. She has reached unprecedented heights in Hollywood for a woman of Indian origin. She is a force to be reckoned with.

Like many of you, I knew who Mindy was before “The Mindy Project” launched. I was a loyal viewer of “The Office” and knew Mindy was, in addition to her supportive role as Kelly Kapoor, one of the writers. However, my love for her grew deeper when I began following her on Twitter. Reading what she said, in 140 characters or less, made me realize that Kaling was a delight. When her book, “Is Everyone Hanging Out Without Me?,” came out, I scooped it like a bald eagle soaring the skies for prey. Just like that, my girl crush for Mindy was solidified, although I feel guilty for using the term “girl crush,” as she hates that phrase.

So, obviously I was ecstatic when I found out she would have her own sitcom, “The Mindy Project.” Yet, as I  have watched the show the past two seasons I have found that the episodes are either on point or dry and not that funny. I became bored of the lackluster story line and Mindy’s revolving boyfriends. The show was still funny and had its moments, but for some reason I sensed a lack of sincerity and continuity. That certain spark was missing.

For some of these reasons, and others, rumors circulated this past winter, as the show went on hiatus that it may not be renewed for a third season. Despite the show’s less than superb quality (I’m not saying it was bad, but it could’ve been better), I was rooting for it because we need Mindy Kaling and “The Mindy Project” on television and in mainstream media. Here’s why:

1) The show does not stereotype or generalize Indians.

Remember “Outsourced?” Yikes. I spent time debating whether I was glad that India was getting on the map or whether everyone assumed this is what the whole country was like. Sure, Mindy plays a doctor, but every other joke is not a crack at Indian culture or values,  which can create poor judgments for those not familiar.

2) There is a body positive message.

Here is a woman starring on her own show who looks like us! (For us brown girls both in body shape and skin color!) And she is capable of dressing nicely and having romantic encounters with men! Ah! All this time Hollywood and Bollywood has told us that we must look like some kind of bombshell if we want to attract attractive men. Mindy proves this wrong. Off-screen, Mindy is just as fierce. The girl wears whatever she wants and looks good. She’s also been featured in Vogue. Her ability to pull off couture and designer-wear, while not being a size zero, is refreshing for women—having that on a national platform is important.

3) Mindy reminds us that high school is not the be all, end all of life.

Okay, I think we all secretly “knew” this, but to have someone as successful as Mindy point it out was validating. In her book, she mentions,

I read her book when I was 19-years-old, but, if I had read it age fifteen, my perspective and emotions during high school would have been much different. Not only does Mindy tell us this advice, but she is living proof of its accuracy.

4) She breaks generalizations and misconceptions.

Mindy destroys the stereotypes of South Asians only mastering in fields like engineering or medicine. The generalizations and misconceptions I am referring to here are different, yet, more important. Growing up, many of us have been taught that intelligence and academic success lead to careers in sciences, finance and law. Going into fields that do not fit into these categories, can sometimes imply to others that we are not smart enough or hard-working enough to make it in the fields that are “important.” Hollywood and show business, especially, get reputations for attracting “artsy” types, and can be considered professions for those who did not do well in school.

Mindy, however, is a graduate of Dartmouth College. She promotes doing well in school, obtaining higher education, and attributes her success to her strong work ethic and abstinence from dating and partying while young. Thus, she demonstrates that hard-work, focus, and intelligence are vital for any career, not just for  the fields that the South Asian population consider most prestigious.

5) She shows us you can be multifaceted.

Smart girls, bookworms, wallflowers and high-achievers are often portrayed in popular culture as one-dimensional.  They are assumed to be interested in their academics and studies and little else. Successful women, even, are considered, or expected, to be constantly tough and professional. Girls and women who achieve any of these labels are generally looked down upon, or oddly at, if they revel too much in celebrity culture, fashion, music, and television. They have been pigeon-holed into a realm of seriousness, whereas the social, confident, and perhaps, less studious girls, are the ones that giggle about Zac Efron or the latest sales at the mall.

Mindy, an intelligent, hardworking power lady that runs her own show, reminds us that anyone can engage in these activities sometimes labeled as “frivolities” for smart girls. Smart girls, you can work hard and achieve many things, all while enjoying life’s finer pleasures guilt-free!

Being the fan-girl that I am, I hate to admit that Mindy is not the first person to have these attributes. However, she is the first person with these characteristics who promotes them, and exemplifies them on a national media platform. Thus, her presence is vital for you, me, young Indian-American women, and young women, in general. Mindy, please continue to work hard and fight for yourself, cause, girl, we need you.