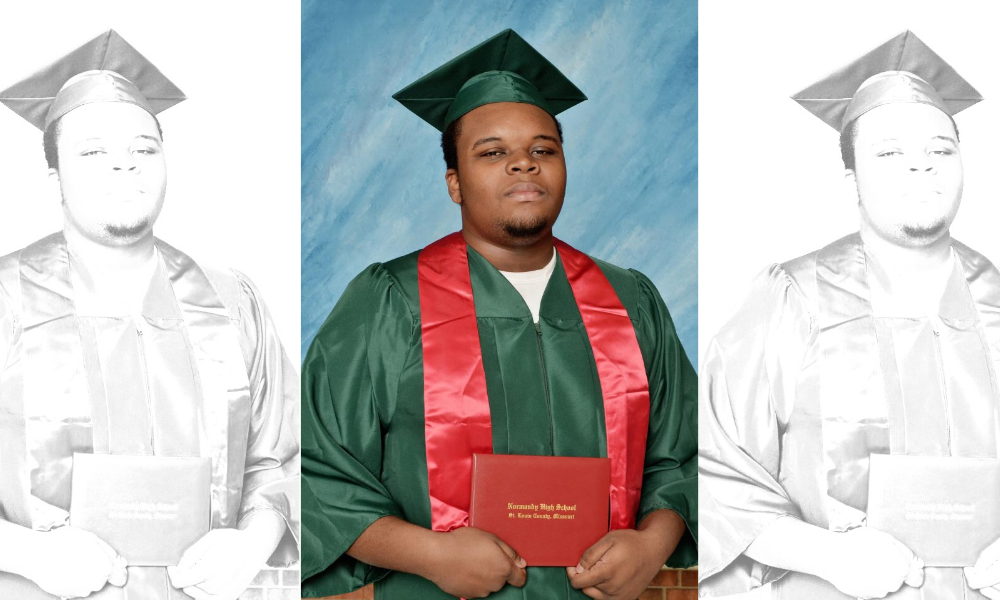 Last weekend, I hung out with my roommates and a big group of girls whom I’ve recently befriended. We had a great time and I found myself saying, “Gee, I love this whole college thing.” My classes are okay and work is inevitable as a pre-med student, but I enjoy every little bit of it. Work or play, everything melds together for me. It’s an incredible feeling that I never had in high school.

Recently, my happiness as a budding freshman got me thinking about another freshman not so far away in Missouri. When I read and hear about him, I realize that he was just like me: a person of color trying to get his life together for the future. No matter how much CNN, MSNBC, and Fox News try to paint Mike Brown as some sort of low-life, teen criminal, we can’t escape the facts.

Fact: He died a few days before he was going to start Vatterott College, where he was planning to study air conditioning and heating engineering.

Fact: He had no previous criminal record.

Fact: Friends and family have stated numerous times that he was a friendly, respectful person with no previous incidents involving violence.

When I ruminated about Brown’s tragedy, I thought of it through the eyes of someone who was just beginning a new chapter of his life. He probably went dorm shopping and combed through Amazon for good textbooks. A week before his death, he might’ve tied up loose ends with friends, hanging out with everyone before school took its toll. I was doing those things before I started university. Why wouldn’t he feel the same way? As incoming freshmen, we all go through those phases of transitioning into college.

Thinking about this incident made me want to talk to one of my roommates about it. We felt a connection with a complete stranger because he was in the same position as we were. Yet, Brown’s incident isn’t an isolated case for people of color. It isn’t even unrelated to women of color. It highlighted a kind of racism that truly hurts: the silent racism that sneaks up on you in a casual conversation or in the punch line of a comedian’s joke. As a woman of color, you may have felt it too, when you dress a certain way or apply for a job. You may have heard it from a seemingly harmless comment from a friend or even in social situations.

The happenings of Ferguson taught us a number of things. First, racism is here in the twenty-first century, and it will always be there. Yet, how we, as a society, react to it will show the moment we’ve truly overcome our age old prejudices. Second, hiding the truth, as the local government of Ferguson has done, will not stop racism from occurring in the future. Say it like it is and maybe then can society teach its next generation about hatred and discrimination. And third, no matter what your ethnicity, if you’re a person of color, racism will be in your life’s peripheral vision.

I believe that when people of color, as a whole, stop feeling inferior for not being “white,” in order to be accepted by others, can we finally be free of the shackles that hold us back. If we just stop considering “the Caucasian ideal” as the only ideal, we can be equals to our Caucasian friends.

There’s no image of what a criminal looks like, whether he’s a six-foot-five black man or even a woman wearing a hijab, or a headscarf. We, people of color, have to stop being scared for not conforming to white standards. Being a light-skinned Pakistani, Indian, or Bengali person shouldn’t automatically cause you to be better than every other dark person. If Brown looked exactly as he did, but as a white teenage boy, then would he have suffered the same fate as he did on August 9. We will never know the truth, but we do know that when you’re hands are up in front of a police officer, that’s a very obvious sign of giving in to authority.

Brown’s death was extremely gruesome and no one should have to go out of the world like that, especially a young person. The deepest parts of my heart go out to his family. There is no reason for a parent to lose his or her child. Brown’s parents must’ve worked hard to raise him in the same way my parents did for me. When I think back to all the sacrifices my parents made and how proud they were to see me fulfilling my dreams, I realize that all caring parents do this for their children.

When I see Mrs. McSpadden or Mr. Head speak about their son in interviews, I see the same kind of devotion our parents give to us. I can’t imagine how it’s like to lose a child, but I feel that if my parents ever lost me or my little brother, it would destroy them internally. I sincerely hope that she can get back on her feet and cope with her loss, as it’s not an easy one.

It kills me to think about how Brown’s life could’ve continued had he not passed away. He would’ve been just another freshman, like me, studying for tough classes and hanging out with newfound friends. You may not be a black male teenager living in the Midwest, but realize that as a person of color, this could’ve easily happened to you or to me. We don’t know exactly what Mike Brown was doing on that August night, but we do know that he could’ve been any of us.