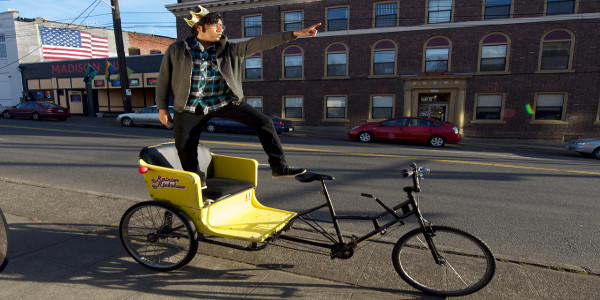 Skidmore College described comedian Hari Kondabolu’s performance in 2011 using the above tagline. His fan base and reputation has grown beyond stereotypes since then, as evidenced by the packed house last Thursday night at Kondabolu’s kickoff event.

As the 2014-15 Artist-in-Residence, specifically, of the Asian/Pacific/American Institute at NYU, Kondabolu’s performance, which came with an intellectual and hilarious spin to topical racial and political issues, was energetic and fresh.

Kondabolu’s comedy album, Waiting for 2042 (2042 being the year white people will be the racial minority in America) was released in March (now available on Spotify). He has appeared on the Late Show with David Letterman, Conan, Jimmy Kimmel Live, and was a correspondent and writer on Totally Biased with W. Kamau Bell, among others.

After his stand-up set, Kondabolu joined the Executive Director of the Institute for Diversity in the Arts, Jeff Chang, to discuss the state of South Asians in the public eye. The most interesting part of the conversation was Kondabolu acknowledging that the expectation of South Asian parents for their kids to become lawyers and doctors isn’t necessarily a bad thing, as a career in the arts or as a political organizer is often only possible for the privileged.

Kondabolu’s brother, Ashok (known as Dapwell from the group Das Racist), also joined the conversation, engaging in the same banter shown in his brother’s podcast, The Untitled Kondabolu Brother’s Project. He wore a shirt, designed by himself, with a print of the cover of the New York Daily News quoting former Mayor Michael Bloomberg, “We stop too many whites” about the city’s Stop-and-Frisk policy.

I took a friend, who (shamefully) has never heard of Kondabolu, predicted Kondabolu’s career will explode in the next few years. Kondabolu has not just joined the ranks of increasingly popular South Asians in American media, but as a performer in his own right.