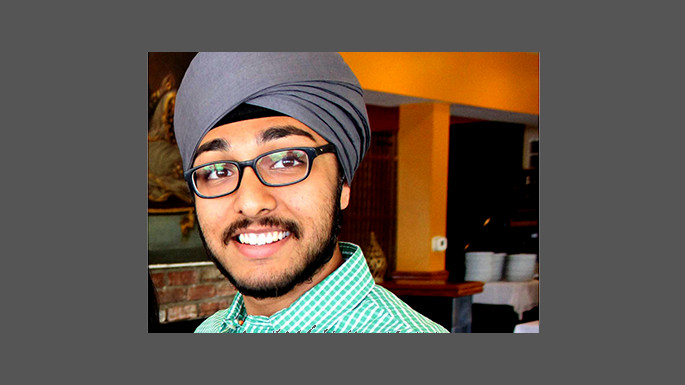 With the support of the American Civil Liberties Union and United Sikhs, a Sikh college student filed a federal lawsuit against the U.S. Army because he is barred from his college’s Reserve Officers’ Training Corps program. He can not serve his country until he removes his turban, shaves his beard and cuts his hair.

Iknoor Singh, a sophomore at Hofstra University on Long Island, who is a believer and practitioner of the Sikh faith, is studying finance and business analytics. Singh, who initially appealed his denied application as a freshman, decided to sue the United States Army for violating the Religious Freedom Restoration Act, on Nov. 12 in Washington, D.C.

“All my life, I’ve dreamed of serving my country,” Singh writes on his blog on the ACLU website.

In April of 2013, Singh requested a religious exemption from the military’s policies with regards to grooming, which requires cadets to keep cut hair and remain without a beard, but his initial request was denied. The U.S. Army claimed that granting this exemption would have “an adverse impact on the Army’s readiness, unit cohesion, standards, health, safety, or discipline.”

Singh expressed not only his frustration with this decision, but his confusion with the Army’s rationale.

“The decision made little sense to me. In addition to religious accommodations that have been granted, the Army allows men to wear beards for medical reasons and wigs to cover baldness. Women may have long hair provided they keep it neat and out of the way. There is no indication that these existing grooming policies and accommodations have caused problems.”

According to a new policy announced by the Army in January, it allows troops to seek waivers on a case-by-case basis to wear religious clothing, seek prayer time or engage in religious practices.

The U.S. Army then reevaluated Singh’s decision by saying he could only apply for religious exemption after being enrolled as a cadet. This document was obviously a counter strategy since the only way that Singh would be able to enroll, as a cadet would be by cutting his hair and shaving his beard.

Several years ago, the Army granted religious accommodations to a couple of Sikhs, including Capt. Tejdeep Singh Rattan, a dentist serving in the United States Army and Capt. Kamaljeet Singh Kalsi, a doctor and a practicing Sikh. Both were enlisted under the notion by their recruiters that their articles of faith would not pose a problem, but after completing their four years of studies, they were told to remove their turbans, cut their hair and beards for active duty.

The Army changed their mind after several Sikh organizations and a letter was to Defense Secretary Robert Gates, signed by 43 members of the House of Representatives and six U.S. senators.

From 1948 to 1984,  practicing Sikhs were permitted to serve while maintaining their articles of faith. But in 1984, the action was reversed when Gen. John A. Wickham Jr., then Chief of Staff of the Army, eliminated the exception for Sikhs and others who wore “conspicuous” items of faith.

Singh, who thought he too would be granted exemption, was faced with a tough decision – his faith or his dream. According to his lawsuit, Singh, who wants to serve as military intelligence personnel, speaks four languages under his belt – English, Punjabi, Hindi and Urdu.

“I couldn’t believe the military was asking me to make the impossible decision of choosing between the country I love and my faith… Choosing between one’s faith and serving one’s country is a decision that no one should have to make,” he writes on his blog.

For decades, Sikhs are well respected for their militancy and their reputation as warriors. Practicing Sikhs have and continue to serve in the armed services in nations around the globe. Countries such as Great Britain and Canada permit Sikhs to serve in their army without compromising their faith.

Singh goes on to write, “How is it possible that most Sikhs like me are prohibited from serving in the United States—a nation whose founding principle is religious freedom?”

According to a statement released by Hofstra University, they “entirely supports Mr. Singh’s ambitions to serve his country…. We very much hope that the Army will permit us to enroll Mr. Singh in the program as a full Cadet.”

Singh is allowed to audit ROTC classes at Hofstra University, and according to the University he is being provided with the, “leadership training to the extent that the U.S. Army has allowed.”

But Singh’s attorneys said he is not receiving credit for the classes, nor is he eligible for potential ROTC scholarships because he is not an actual enlistee.

“Barring us from serving in the military because of our religious practices helps reinforce these hurtful stereotypes,” Singh writes. “It is my hope that, when fellow Americans see Sikhs like me defending this great nation, the mis-perception of Sikhs being “terrorists” and “foreigners” will fade away. They will start judging Sikhs for who we are, based on our character, as opposed to how we look.”

Since Sikhs are constant targets of hate crimes, because of the same headgear Singh is fighting for, I would think the United States government wants to stand with the Sikh community in solidarity against the misrepresentation and association with Sikhism and terrorism.

Banning Sikhs from enrolling or serving in the U.S. Army because of their turban or beard is not only a clear violation of one’s freedom of religion, but also in many ways enables the thoughts of prejudice and bias against the Sikh community.

It’s ironic that the Army was created to serve and protect our nation’s democracy and freedom, but in Singh’s case, it seems like it is not only violating the freedom of a specific religious group, it is also indirectly failing to protect groups of people. All in all, the United States Army needs to set an example. They need to be the role model for the people of America to follow.