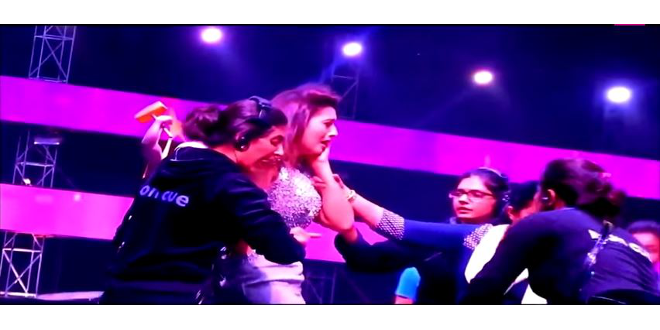 It never ceases to amaze me that events like this still occur every day around the world. Indian model and reality TV personality Gauhar Khan was slapped across the face by 24-year-old Akil Malik on Sun., Nov. 30, while she was hosting the finale of the reality singing competition “Raw Star” shown on StarPlus.

Malik was arrested after the incident and said the reason for the slap was, because Khan “being a Muslim woman, should not have worn such a short dress,” he said.

Moreover, Malik reportedly told Mumbai police that he found himself attracted to Khan because she was wearing short clothes and that he slapped her in front of so many people to prove that Khan’s outfits could “damage the brains” of her male audience members.

But wait, there’s more. Here’s what Malik was quoted to have said about the incident in police reports according to Buzzfeed:

Actresses are the face of society and they should not wear skirts and short clothes as they make youngsters get attracted to them sexually. These days, boys who are minors are also committing crimes such as rape and molestation and many of them keep obscene photographs of actresses in their pockets… If actresses stop wearing short clothes, crime will decrease and lead to a better society.”

With so many popular faces standing up for feminism in 2014, including Emma Watson’s famous speech at the United Nations about gender equality, to Aziz Ansari’s recent appearance on The Late Show with David Letterman, where he said everyone should be a feminist, to Parineeti Chopra schooling boys about women’s menstrual health, it’s despicable to watch a well-known Bollywood face shamed because of her choice of clothing!

With all of the progress we are finally starting to make with women’s empowerment, there is nothing more frustrating, disheartening, and truly upsetting to see than people who continue to be stuck in a mindset where women will always be treated as less than. Not only did Malik want to punish Khan for wearing an outfit he deemed inappropriate, he used her religion to do so, along with the idea that her clothes are what caused the violence against her.

Victim blaming is rampant in India. There is constant barrage of stories about women getting raped on their way home from school or work, and the cops blaming said women for the attack because they were out alone. And the idea that someone “has it coming” with their style of dress or their words and actions is not only medieval, it’s morally reprehensible.

Recently a young man with the YouTube account MonsterShanu explained why this slap occurred and he’s right. The problem isn’t with one person. Misogyny is inherent in India at the moment and something needs to be done about it. Immediately!

Of course, all men should not be blamed for Malik’s mistake. Youtuber MonsterShanu’s rant proves this. As do the hundreds of tweets in support of Khan and against Malik from fellow celebrities and public personalities.

Famed lyricist Javed Akthar had this to say about the attack.

Farhan Akthar was one of the first to tweet his outrage about Khan’s attack which only makes sense as Khan has his own organization called #MARD, Men Against Rape and Discrimination, that aims to raise awareness against incidents just like this one.

Bollywood director Madhur Bhandarkar, who took on issues of female inequality and female celeb stigmas in “Fashion” and “Heroine,” was also disgusted by the attack.

The tweets of support for Khan flooded the social media site for hours after the news broke. And Khan broke her silence over the events on December 2, stating her shock over the matter and eloquently reprimanded Malik and others who believed his sentiments.

If someone is opposed to any ideologies, an educated society and its youth should raise their voice, protest in a peaceful manner and have a dialogue, not beat, attack and feel that he will be scot free…No one has the right to attack, hurt or torture anybody, be it a woman or man, for exercising what one’s personal thoughts or beliefs might be.”

When will our world be ready to accept this presumably obvious statement? When will we stop hearing about how the injustices and attacks against women are their own fault? We may have come a long way in the world with feminism and equality towards women, but travesties like Khan’s attack, now coined as #SlapGate, move the direction of progress one step forward, two steps back.