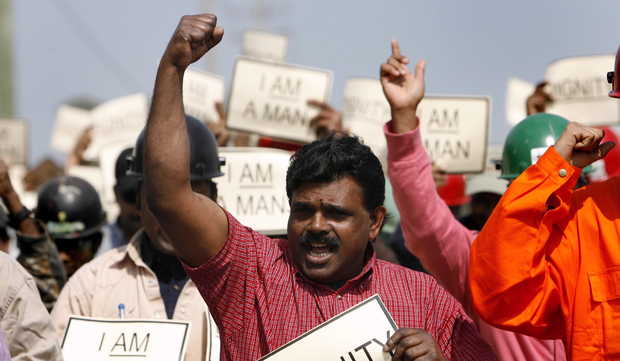 Last Wednesday, a federal jury in New Orleans awarded $14 million to five Indian men who were lured to the country and exploited by their employer. The jury verdict, the largest ever in a labor trafficking case, was in response to the inhumane conditions the men were forced to work under.

The four-week trial resulted in a judgment against Signal International, New Orleans lawyer Malvern Burnett, and India-based recruiter Sachin Dewan, who were found guilty for racketeering, discrimination, labor trafficking and fraud. Signal is ordered to pay $12 million, while Burnett and Dewan are ordered to pay $915,000 each.

The case is one of the many related lawsuits against Signal comprised of over 200 plaintiffs. A federal judge rejected the certification of Indian workers under a class-action lawsuit. According to the plaintiffs, 500 Indian men were recruited by Signal as guest workers to repair the damages left by Hurricane Katrina. The workers were lured into the country with the promise of U.S. permanent residency for them and their families. According to the American Civil Liberties Union (ACLU), each of the workers paid Signal between $10,000 to $20,000 by selling their property and forcing their families into debt.

Upon arrival at Signal shipyards in Pascagoula, Mississippi, the men discovered that they would not receive permanent residency documents as promised, and were charged $1,050 per month by Signal “to live in guarded labor camps where up to 24 men lived in single 1,800-square-foot (167-sqaure-metre) units.”

An economist hired by the plaintiffs estimated that Signal saved over $8 million by hiring Indian workers instead of American workers.

In 2007, some of the plaintiffs were detained by Signal’s security guards in retaliation for complaining about their working conditions and meeting with workers’ rights advocates. In a separate lawsuit, which is set for trial in June, the U.S. Equal Employment Opportunity Commission is suing Signal for violating federal law and abusing the Indian workers.

The suit was brought under the Victims of Trafficking and Violence Protection Act (VTVPA), a federal law that protects people from traffickers.

The VTVPA, which was original passed by Congress in 2000 and signed by President Bill Clinton, established methods to protect victims, prosecute traffickers by corresponding with local and state authorities, and prevent human trafficking. The act also created the Interagency Task Force to Monitor and Combat Trafficking (TFMCT), which is required to publish a Trafficking in Persons (TIP) report every year.

The VTVPA acknowledges trafficking as modern day slavery by defining it within three categories – sex trafficking, labor trafficking, and unlawful recruitment or use of child soldiers.

According to the TFMCT, “labor trafficking encompasses the range of activities – recruiting, harboring, transporting, providing, or obtaining – involved when a person uses force or physical threats, psychological coercion, abuse of the legal process, deception, or other coercive means to compel someone to work.”

Rishika is in her last year of law school. She is a self-proclaimed coffee addict, foodie, and a news junkie. She has a deep love for politics, culture, religion, tackling misogyny, and sociology. When she’s not busy reading or drinking coffee, she enjoys watching horrible reality and traveling.