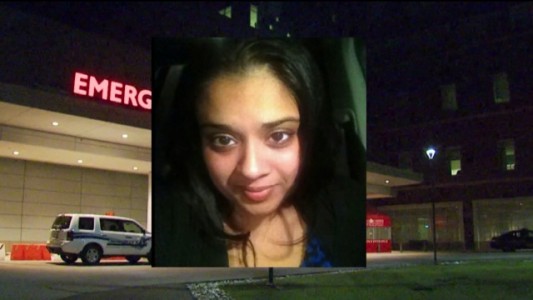 Earlier today, Purvi Patel, a 35-year-old Indiana woman previously convicted of feticide, was released from prison. According to Indiana Department of Correction spokesman Doug Garrison, Patel walked out of Indiana Women’s Prison in Indianapolis around 10 a.m. with family members.

Patel was arrested in 2013 and charged with feticide, and sentenced to 20 years in prison. In July, this conviction was overturned, while upholding the lesser charge of child neglect. Yesterday, a judge resentenced Patel to 18 months in prison—which is more time than she had already served—and ordered her immediate release.

Patel’s attorney, Lawrence Marshall, a Stanford University law professor, said Patel is “very, very joyful that this day has come,” but that she now needs privacy. “For right now, she needs to recover from what is obviously a traumatic several years. She has to take her life and try to make something meaningful out of all the wreckage that got her here.”

As of early December, Indiana’s attorney general responded to an appeal in the case of Purvi Patel, who is currently serving a sentence for 20 years after she admitted to giving birth to a stillborn fetus, and then abandoning the baby in a dumpster. The appeal opts to stand by the original conviction—30 years in prison, with 10 years suspended and a separate six-year sentence served concurrently in March of 2015.

On Mar. 30, 2015 Purvi Patel was sentenced to 20 years in prison on charges of feticide and neglect, seemingly contradicting charges. Patel is the first woman in the U.S. to be charged and sentenced under the Indiana’s feticide laws.

The sentencing hearing for Purvi Patel has been scheduled for March 30 in South Bend, Indiana. She currently lives with her parents and grandparents and manages her family’s restaurant where she works seven days a week in addition to providing care for her grandparents. She fears for the health and welfare of her family if they lose her support. She’s asking for your help today. Support the Patel Family Support Fund, which has been arranged by Apna Ghar, an organization that conducts advocacy across immigrant communities to end gender violence and empowers women to be self-sufficient through a full spectrum of services, from education to emergency housing to counseling and legal services.

On Feb. 3, 2015, Purvi Patel, a 33-year-old woman from Indiana was found guilty of feticide and felony neglect of a dependent, two entirely contradictory charges. Patel is facing a maximum 70 years in prison and is scheduled for sentencing on March 6. The jury in the case deliberated for less than five hours after a seven-day trial.

Patel’s case is interesting for a number of reasons; the trend of medical personnel becoming more involved in law enforcement, the contradictory charges, an outdated medical test, and the spate of cases involving self-induced miscarriages. The last is of some concern to lawmakers and human rights activists.

In July 2013, Patel showed up to an emergency room in South Bend, Indiana to seek assistance for heavy vaginal bleeding. Patel, an unmarried Indian-American woman living with her conservative parents initially denied that she was pregnant. She later told the medical staff that she had given birth to a stillborn baby at home, whose body she placed in a bag first, and then put in a nearby dumpster. Medical personnel was alarmed, a search ensued, and the body found.

Patel herself was first questioned by police at the hospital, who later searched her house and cell phone. The police alleged that the search resulted in the discovery of a series of text messages between Patel and a friend, where she admitted to obtaining drugs from Hong Kong to terminate her pregnancy. However, a pathologist at the trial testified that no such drugs were found in Patel’s blood.

In spite of the lack of evidence that Patel took these drugs, she was convicted of both “feticide” and “felony neglect of a child” charges under Indiana law, both of which are legally contradictory. Under Indiana law, “neglect of a dependent child” is defined as “a person having the care of a dependent, who knowingly or intentionally places the dependent in a situation that endangers the dependent’s life or health.” For this to have taken place, Patel would have had to given birth to a live baby.

In contrast, “feticide” is defined as “a person who knowingly or intentionally terminates a human pregnancy with an intention other than to produce a live birth or to remove a dead fetus.” While exclusions in this law provide for legal abortions, feticide requires the baby to be born dead unlike neglect of a child.

The prosecution argued the contradictory charges by reasoning that “Patel took the drugs to induce a miscarriage but that instead of miscarrying, Patel delivered a live fetus that she abandoned.” The same pathologist that testified that he found no drugs in Patel’s blood samples, also used a “float test” to determine that Patel’s fetus was born alive.

Thirty-eight states in the U.S. currently have fetal homicide laws. The laws vary between states in matters of when they may become applicable in the course of the pregnancy, how a fetus is distinguished from a baby, and in the inclusion of fetuses as potential victims of crimes. The Indiana feticide law was put in place to punish those who cause a miscarriage by assaulting pregnant women and to catch illegal abortion providers. The latter is exactly what the state hopes to do, but is now using the law against those practicing self-induced abortions.

Patel is the second woman in Indiana to be charged under the feticide law. In 2011, prosecutors charged Bei Bei Shuai, a Chinese-American woman, with murder and attempted feticide. Shuai, who was depressed after a breakup with her boyfriend, attempted suicide by consuming rat poison. At the time of her attempt, Shuai was 33 weeks into her pregnancy. Doctors performed a Caesarian to save her baby, who was taken off of life support after two days.

Despite attempted suicide not being a crime in Indiana, Shuai was the first woman in Indiana to be held liable for the outcome of her pregnancy. While under sedation in the mental health wing, Shuai was questioned by homicide detectives immediately after her baby’s death. She was held in prison for over a year.

These two cases are terrifying to anyone who believes in women’s rights and reproductive rights. The fact that a state could charge women, who have chosen to consider abortion, for feticide brings up the question of just how far these laws may be applied.

Another concerning factor is the role that healthcare providers played in prosecuting this case. This could lead to more women in need of medical attention frightened to not to go to the hospital for fear of legal repercussions.