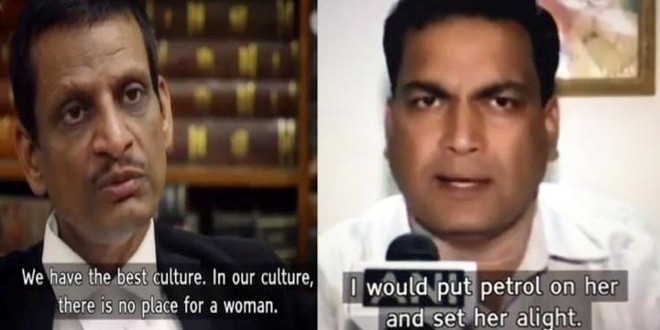 This post was originally published on bravuramagazine.com, and this letter was written in response to filmmaker Leslee Udwin’s documentary “India’s Daughter,” currently banned in India.

Good day to you. My name is Tirusha Dave, and I am a 30-year-old Gujarati, who lives an interesting life here in the U.S. Allow me to share a bit about myself.

I work in the fashion industry, as a magazine editor. I dress very trendy, sometimes in jeans, skirts, high-heels, and dresses, sometimes exposing my legs because of the length. Sometimes I spend late nights working alongside my male photographers, as we get work done. And speaking of males, there are several guy friends who are very close to me, one of them also happens to be my best friend. I love to go out with my friends, both male and female, especially at night.

I will enjoy a drink or two, Vodka and cranberry juice being my preferred choice of beverage. And the movies? I love to see Bollywood movies, especially the last show on the first day because it’s so packed. I also love to travel to all different places in the world and I will speak with random people, making new friends. I also go on dates with people who are non-relatives. Such a shame, right? I am a disgrace to the “Indian culture,” a culture where you think women are like a flower and should be protected by a man. That is why I choose to always have my guy friends around when I go out at night, but then you turn it around on us women and make it a reason for you to rape us. How is that fair?

In the dictionary, there is a word called HYPOCRITE. Allow me to give you the Dictionary.com definition of the word:

That is what the three of you are, but then again, Mukesh, in your “defense,” you are an uneducated, lousy, good-for-nothing, human being. So, there is no point in you even understanding what that word means. You grew up in a village; you have no sense of life or everything surrounding you. But see, that is the difference between you and me. There are so many people who have come from small villages and have lead a successful life; they have made something of themselves. But you…you chose to tread down the wrong path. You could have had a good future. But now, not even 30-years-old and the entire world hates you. Your parents are living in a fantasy world, thinking you did nothing wrong. And you are months away from being hung on death row.

Why? Because you raped a young woman and left her to die on the side of the street. But Mukesh, let me ask you something. At this rate, shouldn’t all Bollywood actresses also be raped? They wear such revealing clothes in their films. And when they go to award shows, they dance to “item songs,” and they wear saris where the blouses now look like bras and bikini tops. Wait a minute…didn’t you used to see Bollywood movies before you were thrown into jail for rape? So, this is a perfect example, of why you’re a hypocrite. Does all of this make sense now?

However, Advocates Sharma and Singh, you are “educated,” right? You should understand the meaning of this world. Or am I mistaken? Because you’ve studied so much, you should MORALLY know what you are saying, and how it is represented in the rest of the world. So, when you say there is “no place for women,” or that you would burn your own daughter/sister alive, how does that make you feel? Maybe someone should shove a rod, up and inside of you, pull out your intestines and leave you to die on the side of the road? How do you think that would feel?

Sharma and Singh – do you have a family of your own? Do you have a wife? Daughter? Sister? Niece? Cousin? Someone of the female specimen who is related to you? So, be very truthful and honest with yourselves, if it was BROAD daylight, and this female relative of yours was doing her normal, everyday routine, whether it be going to work, school, getting groceries, or seeing a movie, just as Jyoti Singh was, and she was raped (and maybe even killed in the process), would you still think she deserved it?

I could give two shits what your response is, whether it’s the politically correct version or the fact that you still think women have no place in society. Just be honest with yourselves.

I wrote this in an article before, and I will share it with you all:

Research done by the National Crime Records Bureau’s 2013 annual report states that in India there were 24,923 rape cases reported in 2012. The statistics then states that from these reported rapes, 24,470 were committed by a relative or neighbor. In a recent news report, statistics states that one woman gets raped every 20 minutes in India.

Do you not feel ashamed to call yourselves Indians? You are the pigs who are letting this to happen in a nation which has so much beauty to offer to the world.

[Read Related: I am ashamed to be an Indian Woman]

Mukesh, what did Jyoti do so wrong? She was a hard-working medical student, a new-age Indian woman, who went to see the film “Life of Pi” at night and that too with a male friend, who her parents knew. Big deal! You live in a democratic country, where people have the choice to go about their lives as they please. This, in no sense, gives you the right to brutally rape and attack them. You’re a sick dog, and you deserve to be placed in an American jail, where your cell-mates, (who are male), will rape you.

In an article titled “Sexual Coercion Rates in Seven Midwestern Prisons for Men,” published in The Prison Journal, it states about 1,788 male inmates were surveyed and “about 21 percent claimed they had been coerced or pressured into sexual activity during their incarceration, and 7 percent claimed that they had been raped in their current facility.” I speak for the entire female population when I say: I wish you would be one of those statistiI guess as women, we simply must remain silent, not fight back, and allow pitiful, disgusting, hypocritical, shameless men, such as yourselves, lead our lives for us. Maybe one day, scientists will make a way for men to become women, and women to become men.

Oh wait! That day has already come. Maybe, just maybe, Sharma and Singh, you should take all the money you have, and get a gender-surgery done. Live the life of a woman for one day. Understand what it’s like to be cat-called for NO reason, when you’re just walking home from college, or waiting for the bus to take you to work.

And thankfully a court of law saw your defense as mindless, convicting all four rapists, better known as filthy animals, to death. And the “junior,” the fifth convicted rapist, will get his platter handed to him when he is released at the end of this year.

Tirusha Dave is a resident Brown Girl from NJ, who is also the Editor-in-Chief of Bravura Magazine, a fashion and lifestyle publication. She recently showcased her debut collection, of resort wear, during Atlantic City Fashion Week, and has close ties to the South Asian music industry.