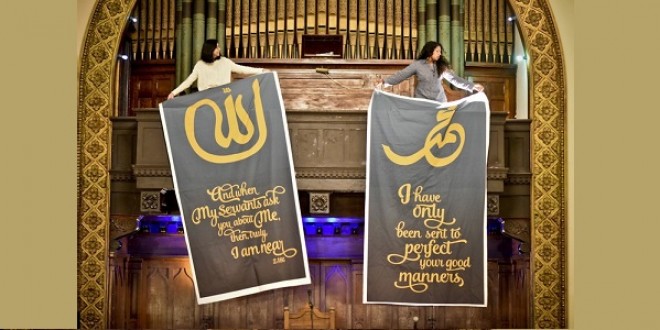 “My favorite Hadith about women and the masjid is the one where the Prophet (peace be upon him) was sitting at the masjid (mosque) and stood up when he saw Fatima, his daughter enter the masjid. Meaning women went to the masjid and there was no barrier. Food for thought,” said Sabina Khan-Ibarra.

The issue of prayer spaces for women in Islam has become increasingly important as some women reject the traditional notion of segregated spaces. Women have complained about not being able to be with members of their family in prayer, not having access to the Imam after prayer, while others have complained about the lack of women’s facilities for prayer and grooming. Women have even shared their experiences about having to pray in the car or on the lawn of a masjid for the lack of a prayer space at all. Many women stay at home to pray simply to avoid being treated like second-class citizens.

Khan-Ibarra planned for the topic of her show “Our Voices” this week on AltMuslimah to be about Women’s Prayer Spaces, and will feature Hind Makki, the creator and curator of Side Entrance; Marwa Aly, producer of Unmosqued; Sarah Saeed, co-author of “Women-Friendly Mosques and Community Centers; and M. Hasna Maznavi the founder of the first women’s mosque in Southern California.

Khan-Ibarra hopes to facilitate a discussion on the issue after hearing a number of complaints. Together with collaborator Hind Makki, a prelude Twitter event was held on March 8, where women discussed their mosque-space issue. “Hijab” referring to not just the head covering that Muslim women don but also the general code of conduct that is prescribed for all Muslim men and women. “Mihrab” is the Arabic word referring to the niche in the wall of the mosque that signifies which direction Mecca is, the direction Muslims face while praying. Incidentally, the Mihrab is most often obscure from view to the women’s prayer area.

It is hoped by all women that sharing their problems will help in the creation of a solution in their respective places of worship. The Twitter conversation also revealed the hope by many women that they would be included in the creation and operation of Masjids in a more meaningful way. The ultimate aim of discussing this issue on a completely public platform like Twitter is, of course to simply give women a place to pray, to be given equal amenities where they are able to focus on their faith.

The follow up event takes place tonight on Twitter at 6:00 PM PDT/ 9:00 PM EST. Join in on the conversation, share your story of exclusion at a mosque and your input on resolving this Islamically global issue.

#HijabAndMihrab being served Iftar during Ramadan 30 minutes LATE AFTER the men had been served 2 buildings away. — Malika B (@NaaishaMalikab) March 8, 2015

Praying in the car when on family Roadtrips because the sisters side was locked or non-existent, while my dad went inside. #HijabAndMihrab

#HijabandMihrab I’m embarrassed I’ve only been to mosque 3 times, when really mosques should be embarrassed when they don’t accomodate women — Sarah Ager (@SaritaAgerman) March 8, 2015

A2 @SideEntrance my best experience was Lighthouse masjid in Oakland. What a beautiful experience. Felt included and loved #HijabAndMihrab

#HijabAndMihrab Salahadeen Center of Nashville was built by men&women in ’98, has always had men&women in power positions, mashaAllah. — Drost Kokoye (@drostk) March 8, 2015

As convert who is unmarried, I don’t have Muslim father, brother, husband. I feel like those are only ways to reach the imam #HijabAndMihrab

#HijabAndMihrab my ideal mosque is one where you walk and and immediately feel the opening of inner space: for quietness 2 grow in the heart — Sarah Sayeed (@SarahSayeedNYC) March 8, 2015

Sabina Khan-Ibarra is a freelance writer and editor. She regularly contributes to her blog, Ibrahim’s Tree which she created after the loss of her infant son in 2011. She created Muslimah Montage as a platform for women to share their stories. Follow her on Twitter.