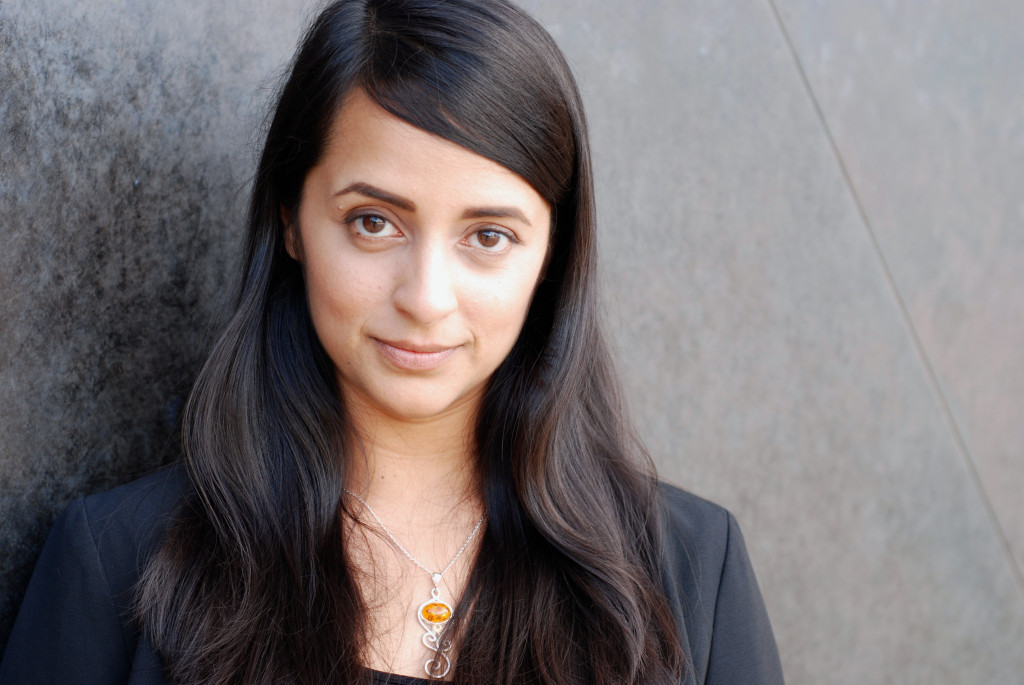 In the summer of 1997, my parents took me to New York for a week-long vacation. I was fourteen years old at the time, and as we came out of the Lincoln Tunnel into midtown Manhattan, I thought,

“This is it. I will live here. I will make it happen.”

I was an absolute stereotypical teenager with stars in my eyes who had heard in passing of a school in New York named Juilliard and dreamt of going there, knowing little about the school besides its well-known reputation. At the time, I had been playing the piano for three years, but I was hardly at the level most of my peers were at that time. What I didn’t have in technical ability, I made up for in passion.

I remember walking up the stairs from the subway station at 66th Street, turning around, and for the first time seeing the glistening silver lettering on the side of the white building where I hoped to spend four years of my life. It took my breath away.

After taking a tour and asking some questions, I stood with my parents on the steps of Avery Fisher Hall with my heart in the pit of my stomach. Before visiting the school, it had all been a beautiful, perfect fantasy. Once I was given the Viewbook, the application forms, the lengthy list of audition requirements, and the prohibitive admissions statistics, I was completely and painfully aware of what it would take for someone like me to be taken seriously by a school of that status. It was much more than I was ever capable of attaining. I didn’t even know where to begin, what questions to ask; I knew from that moment that I was fighting a losing battle.

And I knew that I had no other choice but to fight it.

Later that day, we happened to be in a jewelry store in SoHo. I bought a plain silver ring, put it on my finger and promised myself that until I moved to New York and attended Juilliard, I would not take it off.

I took it off five years later, the day I moved into my dorm room at Juilliard.

I am not saying it was inevitable. In fact, it was the opposite – it only got harder as the years had passed. When the time came to apply, I didn’t even want to because I knew that receiving a rejection letter would crush me beyond repair. It was my father who knew how hard I had worked and convinced me to at least give it a shot. I knew I had put everything on the line for a dream that was anything but a guarantee. Though I worked tirelessly, I was not a prodigy. I was still just a regular kid who really loved music, and by the time I was a senior in high school, I was unequivocally aware of that fact.

I knew I had put everything on the line for a dream that was anything but a guarantee. I was not a prodigy, I worked tirelessly. I was still just a regular kid who really loved music, and by the time I was a senior in high school, I was unequivocally aware of that fact.

The ring remained on my finger, always in my field of vision. I tried to forget it was there – it glared back at me. I knew that taking it off would mean voluntarily conceding. Perhaps, it was ultimately my unwillingness to admit defeat that moved me forward, one millimeter at a time.

It was not easy after that either. Many times, sitting alone in a windowless blue-curtained practice room late at night, hungry and tired with a blank page in front of me and no thoughts left in my head, I asked myself if it was worth it, and if it was really fair to hold myself to a challenge I didn’t fully understand when I signed up for it.

Ten years after I first moved to New York, I still don’t know the answers. I do know this: the act of making that pact and seeing it through to fruition, whatever the cost, gave me the little extra courage I needed to face every other obstacle from that point onward.

From the time I started composing, I was keenly aware that, at least visually speaking, I was the goose in a bunch of ducks. These days, the community of Western classical musicians is much more varied than it was traditionally, but there definitely still aren’t many Indian women composers. Almost without fail, people meeting me for the first time would have the same initial response,

The truth is, I felt terribly embarrassed. I really didn’t know anything about Indian classical music. I had barely ever heard it. My mother, who comes from a part of India that had been colonized by Portugal, listened to only Western classical music – so that was what I knew. I had worked hard to be the best western classical musician I could be. But I still looked Indian, and I felt people were disappointed that I didn’t fit into their image of me.

One day, I met a Hindustani singer. Then a few years later, I met a Carnatic singer. Gradually, I realized that it wasn’t as much the dissociated sounds of Indian classical music that were interesting to me as it was getting to know the people who made those sounds. I recognized the culture that surrounded the music as the culture that existed in my family but was not reflected in my professional life. As I started working with Indian musicians, I let them lead me in ways that were natural for them. I realized that their esthetic, values and their way of being, felt more natural to me than certain elements of the music I had grown up studying.

And that is how I began to love the music.

“This country feels like home. I will live here.”

A few months after returning from my trip, I was in a store that sold Indian imports. I found a ring that reminded me of one I had seen in Jaipur and regretted not buying. I tried it on and it fit perfectly. As it turned out, the ring was from Jaipur, and the woman at the store even let me bargain her down a little, which at that point felt mostly sentimental. 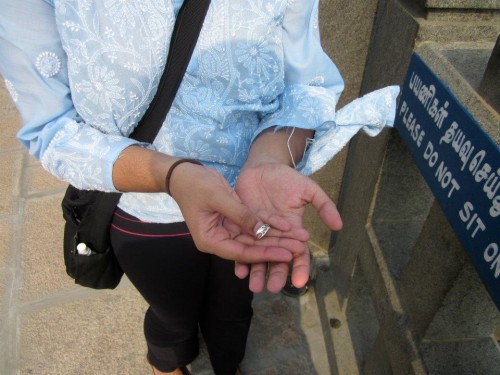 Once again, I vowed that I would keep the ring on my finger until I found a way back to India through music.

This time around, though, the route was much more circuitous. I didn’t spend every single day worrying about how I would get back to India. My work was moving in many different directions that I truly enjoyed. I studied the violin intensively, I composed a number of pieces for choir, I taught both privately and at Manhattan School of Music and had many incredible and inspiring students who taught me volumes. I studied with some wonderful composers of Western music who also gave me insight to more knowledge and understanding of music. Those pursuits definitely took the front seat in my professional life for many years and they made me happy.

However, I never forgot the warmth and resonance I had felt being in India and returning was always on the back of my mind. Meanwhile, many interesting events happened in the background over those years.

I met a number of Indian musicians, sometimes socially and at times to collaborate. Sometimes there would even be a cup of Hindustani masala chai or some homemade idlis. I left these meetings feeling, on one hand, wildly impassioned and filled with a sense of possibility and, on the other hand, strangely homesick for a country in which I had never lived.

Twice during those five years, I was asked to write a piece for Eastern and Western instruments, and one organization even offered to take me with them to India. In the end, both projects fell through, but my ideas remained with me.

Perhaps, the most telling thing of all was when I started my application for the Fulbright U.S. Student Program, an exchange program offering opportunities for students and young professionals to undertake internationally. I realized an application was already underway in my email address. I thought there must be some mistake, but after entering and re-entering my email and password to create a new account, it finally hit me what had happened.

[Read Related: How I Received A Fulbright (and how you can too!)]

Three years ago, when I applied to the Yale School of Music and was waiting to hear back if I would be called in for an audition, I had started to fill out a Fulbright application, only to stop and forget. Ultimately, I auditioned and was accepted into the program at Yale.

As for applying for the Fulbright program, even though it was more certain than applying to Juilliard, the process was a different one. On one hand, the application itself was much more daunting and multi-faceted than applications to the schools I previously attended. I had a checklist of more than a hundred items that seemed to multiply daily. I even made random calls over Skype at odd hours of the night and had regular nightmares for weeks.

On the other hand, it was the first application I had ever submitted that didn’t require me to mold myself even a little bit into another, more desirable version of me. As I wrote my personal statement, I realized I was able to share things that had never mattered on any other application I had submitted. The fact that I was a first generation Indian-American meant something. Not to mention, I grew up speaking Gujarati, and that for once, was more pertinent than my knowledge of Italian and Spanish. I wasn’t just Indian anymore – I was half-Goan and half-Surti, which amongst Indians is a rather rare and curious lineage.

Even my labor of love at the time, Yale’s Hindi a cappella group for which I had been arranging mashups of Bollywood songs and American pop music, was something I could unabashedly mention on this application. It was mostly a novelty in my regular friend circles, but it did say something about my ability to promote mutual understanding through music, as per Fulbright’s mission.

As for the ring from Jaipur, well, I hadn’t taken it off since 2006, except for the one time a few years ago that a piece of the jhali work was bent and started poking at my finger. While I wasn’t able to visit the Ganges during my stay in India, I did visit Kanyakumari, the very bottom tip of India, and I threw my ring from the statue of the poet Thiruvalluvar into the water, where the three oceans surrounding India meet one another. 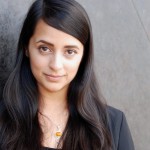 Indian-American composer Reena Esmail enjoys working in both the Western and Hindustani (North Indian) classical music idioms. She is a composer, connoisseur of wildly patterned socks, lover of generic nouns and pronouns, drinker of tea, adversary of intervals and sonata-allegro form. Reena lives in Los Angeles, California. More information about her work is available on her website.