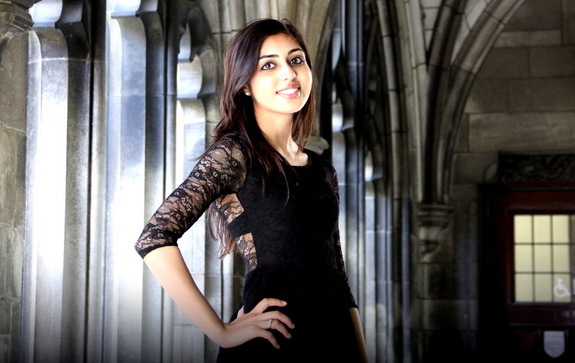 I am a mosaic—a medley of cultures, an assortment of spices.

My ancestors are from Gujarat, India, but the past four generations of my immediate family were born and raised in East Africa. Due to dictator Idi Amin’s “economic war,” my family was evicted from the region in 1972 and sought asylum in the West. Having been raised as a “first-generation,” “Muslim,” “female,” and “American,” I recognize the vulnerabilities and barriers associated with these oft-conflicting labels.

These interests and experiences have led me to the University of Chicago, where I studied political science and human rights, leading to an upcoming year in India working on independent research as a Fulbright-Nehru Scholar, and perhaps, ultimately to a mix of law/public health/public policy in the near future.

My greatest blessing is my family, both those of blood and soul. To give back through what I see as my calling, I endeavor to uphold the rights of disparate girls and women among my daily deeds and doings. Restoring dignity, good health, and quality education will only empower them to be the mothers of future global change.

But, honestly, sometimes I just want to read and write and sing and dance and laugh about sweet nothings.

I call myself a skeptiste, for what drives me to accomplish my goals is disbelieving in any singular truth, any singular path.