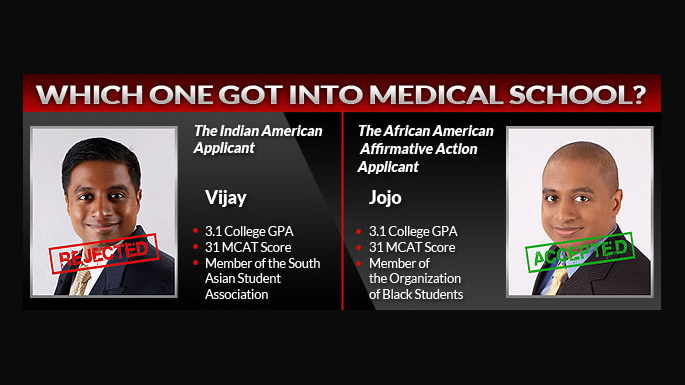 Vijay Chokal-Ingam’s confession that he applied to medical school by posing as an African American and was subsequently accepted for the same reason has earned him flak, kudos and publicity. And while I still haven’t understood his sudden claim to fame (other than being Mindy Kaling’s brother), I feel I must comment on his recent confessions.

He recently shared his experiences as an aspiring medical student who posed as a black man on his website, AlmostBlack.com.

Chokal-Ingam, who is now a professional résumé writer and college/graduate school admissions consultant for L.A. Résumé Service and Interview SOS, said he decided to pose as a black man after he realized his GPA and grades were not good enough to be accepted into medical school as an Indian-American.

And how he came to that realization is due to his more hard-working friend, who did not get into medical school at the time, leaving Chokal-Ingam to pose as an African American to better his chances.

He shaved his head as part of the plan, cut his eyelashes shorter, and changed his name to “Jojo,” his legal middle name.

“I became a serious contender at some of the greatest medical schools in America, including Harvard, Wash U, UPenn, Case Western, and Columbia,” he wrote in a confessional blog on his website. “In all, I interviewed at eleven prestigious medical schools in 9 major cities across America while posing as a black man.”

Chokal-Ingam managed to fool the admission counselors and attend St. Louis University School of Medicine, but only for two years. He said he dropped out after realizing he was not “cut out to be a doctor.”

Gawker.com described Chokal-Ingam as “a cool prankster who is upsetting the status quo.” Perhaps this is due to the interesting hyphenation of his last name, but actually, Chokal-Ingam’s actions are a sign of just how the affirmative action systems are being exploited by those who appear to see these systems as working against them.

Chokal-Ingam confessed to knowing that universities pursue diversity in their student bodies, especially in fields where certain communities are underrepresented and this is at the heart of all this discussion.

When I first read about Chokal-Ingam’s confessions, I was incensed. Here was someone who led a relatively good life, who had just come out to cheating the system, misrepresented his racial identity on official documents and then boasted about his sudden popularity with women on Facebook.

Overall, I found his actions were racist, misrepresentative and misappropriating.

Affirmative action systems were put into place in this country and others to provide opportunities to communities who are under- represented in education and employment.

In India, this became the famous “reservation” system, and in America, it came to be known as Affirmative Action. The gist of the system is to ensure that historically under-represented groups based on gender or race, such as women or minorities do not face continued discrimination, and workforces and educational institutions reflect the diversity that exist in real populations.

According to the New York Post, Chokal-Ingam confirmed that his actions are a reflection of his stance on Affirmative Action.

“Racism is not the answer. … It also promotes negative stereotypes about the competency of minority Americans by making it seem like they need special treatment,” he said.

“I am not convinced that affirmative action fully benefits the underprivileged,” he wrote in a recent article on the New York Post. “In my application to medical school, I disclosed that my mother was a doctor, my dad an architect, that I drove a nice car, that I didn’t receive financial aid and that I grew up in an affluent section of Boston. I didn’t even say that I was ‘disadvantaged.’ Yet medical schools such as Case Western Reserve University considered me one of their ‘affirmative-action candidates.’”

Yes, there are loopholes and pitfalls in the affirmative action system, and  Chokal-Ingam just exposed one of them.  He will further discuss these loop holes and more in his upcoming memoir, called “Almost Black,” which, according to him, is not approved by his famous sister, Kaling, also known as Dr. Mindy Lahiri on the hit show “The Mindy Project.”

In his blog, Chokal-Ingam lightly touches upon an issue that this article, examines more closely: the fact that Asian Americans in some parts of the U.S. have to work harder to get into the country’s best universities. In some fields, Asian Americans are considered to be overrepresented, and thus, their ethnic backgrounds actually count against them.

The pressure to succeed in education among Asian Americans is well-known, as well as the intense pressure of succeeding in certain fields such as medicine or engineering is also equally well-known. And affirmative action systems are sometimes counting against those who deserve and work hard to be in these fields.

But what of those who abuse these loopholes in the system? Is this justifiable? Even a form of vigilante justice? Chokal-Ingam claims that he did what he could to ensure his success. And he isn’t the first to question the system, or use it to his own advantage.

However, Chokal-Ingam’s devious social experiment with his black persona was not all a bed of roses. He reported another side effect of misrepresenting his racial identity was facing racial bias.

“Not everything worked out as planned,” he wrote on his website. “Cops harassed me. Store clerks accused me of shoplifting. Women were either scared of me or found my bald power dome very attractive.”

He added: “What started as a devious ploy to gain admission to medical school turned into a twisted social experiment.”

In India, a system similar to Affirmative Action, based on caste-based reservation has been the subject matter of much debate. There are students who deliberately misrepresent their caste status to take advantage of the system. In some states, 80 percent of seats in public education and in the public sector are reserved for those considered historically underrepresented or “backward.” But the question is, is this really reaching those who need it? Most say “no.”

There are no easy answers to systems of affirmative action. But a case can definitely and perhaps should be made to revisit them periodically to verify that means and merit play their part in making these systems work. Underrepresentation is perhaps no longer just about caste, race or ethnicity, but also about means, opportunity and merit. And it may be time to make it count.

Underrepresentation is perhaps no longer just about caste, race or ethnicity, but also about means, opportunity and merit.

But with a second glance, Mindy Kaling’s now infamous brother’s actions are indicative of a larger problem. Asian Americans are over-represented in many fields at Ivy League universities. And if Chokal-Ingam’s actions are any indication, they actually have to work harder to get into these universities.