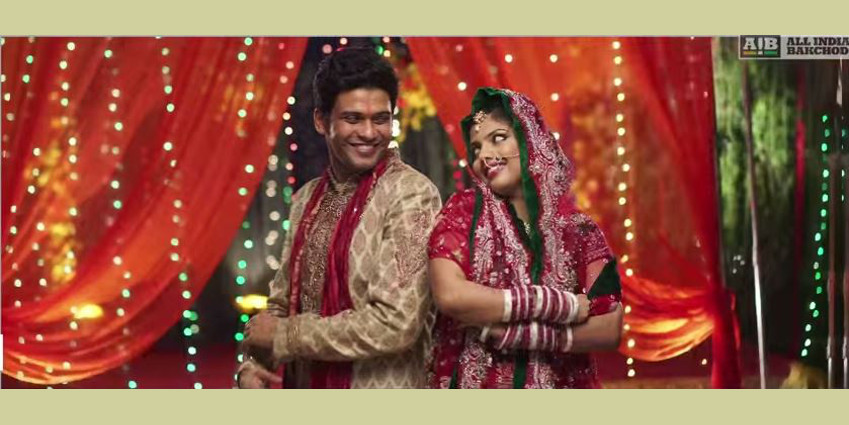 All India Bakchod (AIB), the YouTube channel, started by a group of comics in India who previously came under scrutiny for excessive usage of explicit language in their video roast of Bollywood actors Arjun Kapoor and Ranveer Singh, have released yet another hilarious video, this time, highlighting shaadis.

(Side note: If you were planning on watching the roast, it was, unfortunately, deleted from their channel by a decree of the Indian courts. And, that is Indian censorship at it’s best, my friends!)

Indian weddings, as joyful, jubilant and celebrated as they may be, also have their own setbacks.

The comics have put together a two-part video, titled “Honest Weddings,” which is a hilarious and incredibly honest take on desi shaadis. From the initial meeting of the families to planning the wedding, AIB shows just how overly typical South Asian weddings can be.

Having been to many such celebrations in my life, I have to admit there is nothing like an Indian wedding, not to mention the countless functions that come along with the big day. In addition to the unneeded drama, stress and family tension, comes excitement, closeness and a lifetime worth of experiences and memories.

AIB captures these beautiful and relatable moments perfectly, with a hysterical and comical spin. The raw truthfulness of the characters who unhesitantly say whatever is going on in their head sheds light on a reality we know so well but are too afraid to admit it.

The skit begins with the awkward meeting of the families, in which they ridicule the tradition of dowries and arranging marriages based primarily on academic backgrounds and the family’s status. The boy, Pankaj, and girl, Poonam, also meet for the first time, and the awkwardness of it all is drowned by the frankness of their individual thoughts. The bluntness and candor of the characters are appreciated, though it all points out the stereotypical nature of how Indian couples are arranged and married.

AIB maintains a soft balance in their sketch regarding the true nature of Indian weddings as well as paying homage to the ethnic and traditional value of an Indian upbringing. And not to worry, AIB also captures the many snide remarks made by our favorite aunties at all desi celebrations.

There are many similarities that even South Asians Americans can relate to because, who are we kidding, we are still just as desi. So, make sure to watch the videos below and definitely let us know what you think in the comments box. Or better yet, share a funny moment from a wedding you’ve been to.

Payal Shah is the new summer intern at Brown Girl Magazine. She is a student on her way to do big things. She is a lover of lifestyle and culture related writing and 90s sitcoms. Shah is intensely passionate about life.