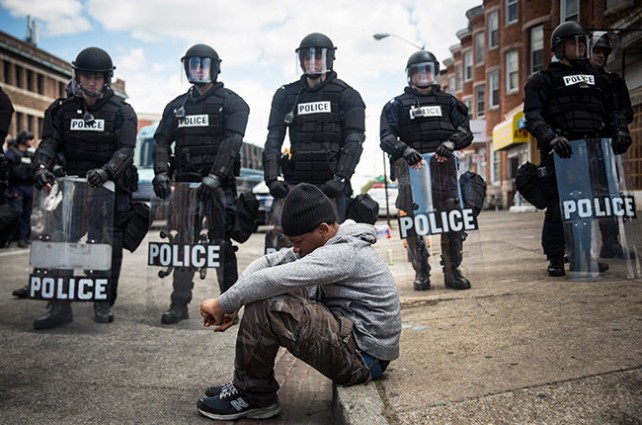 In the wake of the Baltimore Riots last week, there was one thing about our community that become very clear:

Regardless of the impetus behind these riots, we made it known that we were disgusted by them, and by the people who perpetuated them. Statements like “Violence is never the answer,” and “Look at these jaahil (uncivilized) folks” abound, while we patted ourselves on the backs at the fact that WE would never do something like this.

In response to this, I just have a few questions:

Are we equally disgusted by the fact that Black people account for 31 percent of police shooting victims in spite of being only 13 percent of the US population?

Why did so many people in our community have a stronger reaction to a CVS being burnt down than they do to the repeated killing of unarmed black men by the police?

Why do we lack complete sympathy for these riots when violent, often bloody rioting back in the South Asian sub content are regular occurrences (the most recent of which left 60 people dead) that we tend to receive with sympathy and shock?

How have we managed to so completely consume the narrative set by the media that Black people are either dangerous hoodlums or lazy leechers-off-the State? Why do we readily accept ill-informed conclusions that the social issues faced by the Black community are not by circumstance, but by choice?

How often do we state over afternoon chai that Black people must have done something to become the target of police brutality? Yet, we never fail to become furious when an Indian is brutalized by the police?

How is it possible that we have so quickly forgotten that the same disparaging remarks made regarding recent Black protests and riots were made about us in the not-so-distant past when we used similar means to fight for independence in the South Asian subcontinent?

How are we able to so easily cast aside the privileged scope through which we are seeing this? And on that note, why are we so quick to deny our privilege when convenient? Indian Americans are the highest earning income group in the U.S. with an average annual income of $83,000, while Pakistani Americans clock in at $61,000
compared to the national average of $55,000 annually and the Black Median Household income if $33,460. Yet, why do we readily claim privilege when we need to differentiate ourselves from Black people, typically for the erroneous purpose of proving we are somehow better than them?

Is it simply too uncomfortable for us to acknowledge that the privileged existence that the overwhelming majority of us enjoy was afforded by the struggles fought by broken Black bodies? That without their sacrifices in the Civil Rights movement, we would be relegated to the “Colored-Only” margins of American society? If at all, do we realize that we would have migrated to a still-segregated nation?

Is it so hard to admit that of course, we can’t imagine the hopelessness that would drive someone to destroy their own home because historically, the desi narrative has been vastly different and more privileged in the West when compared to that of Black people? Or the despair one feels when living our entire life under the threat of police brutality, disenfranchisement, and mass incarceration is also beyond our comprehension?

How have we not yet realize that this anti-Blackness we reactively feel is a product of the Civil Rights-era “Model Minority Myth” that scholars argue was created to keep minorities divided in the fight for equal rights? Do we not realize that it is also a direct branch of the Colorism so deeply ingrained into the collective desi psyche thanks to British Colonialism?

Why do we so often line up to take cheap shots at other minority groups just to make ourselves look better? On that note, what is with all the desis who are so openly anti-Black that some of them even use it as a reprehensible tool to further their career? Why have we not condemned these folks en masse?

The biggest question of all: Can we ever change?

And if so, what will it take?

Nishi Fatima is a blogger, traveler, Air BnB peruser, and illegal street rapper (well, mainly in her dreams) who day jobs as an Audiologist in the city of Denver, CO. When she’s not tweeting on the current state of racism or deeply musing on the nuances of the desi diaspora via an awkward vlog, she’s probably enthralled by “Law & Order: SVU” on a treadmill somewhere. Her writing has appeared in The Austin-American Statesmen, the Associated Press, and the Dallas Morning News. Follow her thoughts and misadventures at her blog.