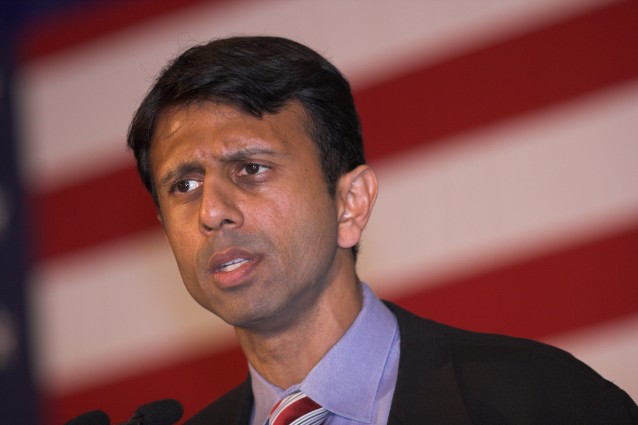 *Update: On Tuesday, November 17, Louisiana Governor Bobby Jindal announced on Fox news that he would be suspending his bid for the 2016 Republican presidential nomination, likely thanks to low polling numbers amongst a multitude of other GOP candidates. Because he cannot be re-elected for Governor, the position is term-limited, Jindal told Fox news that he would work at the think tank he created once his term ends in January.

Of course we can depend on comedian Hari Kondabolu — the mind behind the #Jindian campaign that has provided us with endless laughs — to provide the best reaction to the announcement.

Last night, Twitter was astir following Louisiana Governor Bobby Jindal’s announcement that he is planning to run in the 2016 presidential race. Jindal has made controversial comments in the past regarding his abandonment for his hyphenated Indian-American identity.  As a publication that prides itself on giving South Asian-American women a platform to become a voice for themselves, we honestly do not understand Jindal’s attempts at distancing himself from his cultural heritage. One of our favorite Brown Boy comedians Hari Kondabolu contributed to the start of the hashtag #BobbyJindalisSoWhite. It wasn’t too long before others had joined him in calling out the hypocrisy of Bobby Jindal’s political platforms regarding race.

Soon after, another well-known South Asian comedian — Aasif Mandvi tweeted under the same hashtag but also contributed #Jindian to the mix. What ensued is a whirlwind of hilarity by other Twitter users who share similar emotions regarding Jindal.

you might be a #Jindian if u lightened your skin in an official Portrait. #bobbyjindalissowhite — aasif mandvi (@aasif) June 24, 2015

We have compiled some of the best tweets for your perusal and enjoyment. Despite the fact that these were meant as a joke, there is a case to be made regarding the frustration many Indian-Americans feel. After all, Jindal is a classic case of internalized racism. Finally, after many years of underrepresentation, we are seeing South Asians-Americans in the mainstream. This should be reason to rejoice, but knowing that these representatives of our minority communities reject these so mentioned identities, it is a definitive insult that is being felt throughout America by Indian-Americans who have built their entire lives being honest individuals successfully upholding all aspects of their hyphenated identities.

You might be a #Jindian if you think Khan from Star Trek is the greatest Khan of all time. #BobbyJindalissowhite @harikondabolu @aasif — DesiGirl (@ThisDesiGirl) June 25, 2015

You might be #Jindian if you like the Pussycat Dolls’ version of Jai Ho more than A.R. Rahman’s. #bobbyjindalissowhite — Pooja Paode (@stayjalati) June 25, 2015

For those who found this hashtag to be racist, this man had the perfect response. (And, if you didn’t know, Piyush is Jindal’s original first name.)

no, calling Uncle Piyush out for making a career of willfully ignoring his heritage is not racist. #Jindian #BobbyJindalIsSoWhite — Raj Palsingh (@HipsterYogi) June 25, 2015

And this girl had the perfect response to Raj calling Jindal ‘Uncle Piyush.’ Haha! Good catch. Obviously, an amicable exchange between the two.

You might be #Jindian if you call Bobby “Uncle Piyush” on the #bobbyjindalissowhite tag instead of “Piyush Uncle.” Chee! Log kya sochenge?! — Suleikha Snyder (@suleikhasnyder) June 25, 2015

Considering the Color Run cultural appropriation articles is one of the most popular pieces published on Brown Girl Magazine, this tweet really makes the point, quite appropriately.

#bobbyjindalissowhite he thinks Holi is a spin off of the color run — jaideep (@deepjayrao) June 25, 2015

At the end of the night, Kondabolu was a proud man considering everything that had come out of his inadvertant hashtag campaign.

Starting #bobbyjindalissowhite may be the most rewarding thing I’ve ever done. Good night, everyone. — Hari Kondabolu (@harikondabolu) June 25, 2015