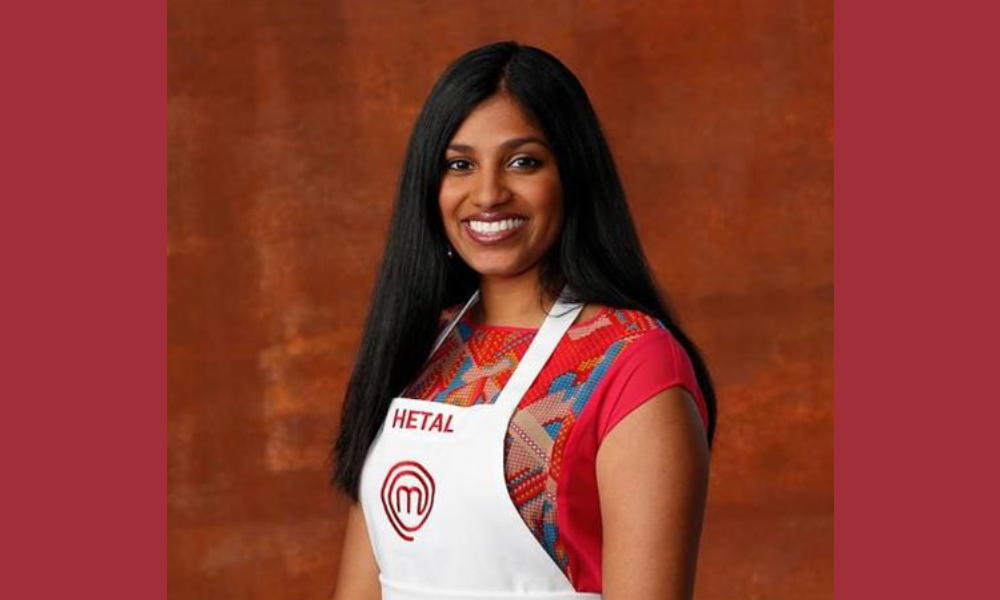 With a bachelor’s degree in biochemistry and a master’s degree in biomedical sciences, Hetal Vasavada is definitely not your average food aficionado. Before her rise to culinary fame as a contestant on season six of FOX’s MasterChef, she was a business development lead at a small healthcare startup in San Francisco. Hailing from Bloomfield, New Jersey, Vasavada diversified her palette from the multifarious cultural cuisines that were available in her town.

“I learned to appreciate everything from a good Italian red sauce to a plate of delicious Ethiopian food.”

Vasavada’s family came to the U.S.  in 1985; she was raised in a large family. As a proud Gujju, her cooking style developed from her mother’s unique tastes. Vasavada said her mother would stress the “ideals of fresh food” within her family and up kept a small garden. She added, “fresh food is the best food,” and we can all agree on that.

Besides putting an Indian twist on everything she makes, Vasavada’s personal taste leans more towards baking. For her, she said, it’s all about “fun fusion desserts.” Being raised on jalebi and raas malais, like any foodie inclined brown girl, she incorporates these flavors and infuses them into traditional Western desserts.

As for professional cooking, she never expected to hold the title of “chef.”

“I decided to pursue my dream of cooking in a professional setting after working in a corporate environment and realizing that I didn’t want to sit at a desk for the rest of my life,” Vasavada said. “I would constantly get in trouble for looking at food blogs and websites at work. Last year, I quit my consulting job and decided to follow my passion in the culinary world. I never really considered being a chef, [or considered it] a career aspiration until people told me that they would pay me for my desserts and meals. It gave me the confidence I needed to continue and pursue my food dream.  I was also lucky enough to have my parents and husband support my decision as well!”

Vasavada’s husband encouraged the budding culinary star to apply for a spot on the competitive reality show, MasterChef. On the day of auditions, Vasavada had thoughts about not going through with it. However, her husband supported her dream and inspired her to continue, and when she left the first audition that day, she knew this was her chance to make it in the culinary world.

“After that first audition, a fire was lit under me and I wanted to prove myself worthy of the MasterChef trophy! Little did we know that I’d end up on the show!”

She added that being under the scrutiny of Chef Gordan Ramsay was nerve racking the first day of taping, but her Indian-inspired apple pie dessert was a hit, thankfully.

Vasavada told BGM her thought process behind the dish:

“In my house, the only ‘dessert’ item my mom would buy was pre-made puff pastry. In addition, my favorite treat was apple pie from a local bakery. I tried to recreate it as a high schooler and worked with the spices I had in my kitchen to cater it to my parent’s taste, and viola! My apple pie puff pastry dish was created!”

It is this knowledge of spices and a “scientific understanding” of food from her science background that will hopefully help her win the title of this season’s MasterChef. After all, Vasavada said cooking is “just a series of chemical reactions” with an edible end product.

But readers, hold the applause, because just as her educational background gives her a slight edge, it also has some challenges attached to it.

Vasavada is the show’s first Hindu vegetarian, but by no means is she the only herbivore to come through MasterChef’s doors.

“Unlike past vegetarian contestants… I have never had any meat or seafood in my life, making [the show] a bit of a challenge for me.”

Nonetheless, like any strong brown girl, she doesn’t let obstacles hold her back from her dreams. Non-vegetarian dishes may pose a unique test for Vasavada’s cooking trials, but she said she knows that if she can pull off these meals, she can also “gain immense street cred and respect.” And, Vasavada looks to past contestants like Bri Kozior for guidance and inspiration.

“My plan is to understand how meat is cooked from a scientific level and apply that to my cooking.”

So far, it seems to be working well for her, considering that she is now one of the last ten chefs remaining in the competition. We plan to see great things come out her culinary work, and even a future restaurant, maybe?

But readers, Vasavada has one small surprise for you!

She chose to share her world famous Chocolate Chai Mini Bundt Cakes, which can be found on her food and lifestyle blog, Pretty Polymath.

For those of you who are foodies or are just as obsessed with food shows as we are at Brown Girl Magazine, be sure to tune in tonight to MasterChef on FOX at 8:00 p.m. EST/PST and 7:00 p.m. CST to see Vasavada in action!