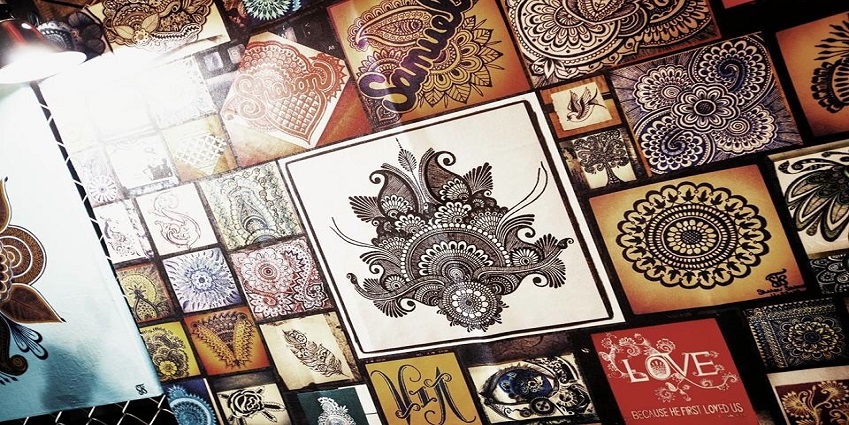 Meet our Brown Girl of the Month for July 2015!

Sharon Samuel is a tax accountant by day and an artist by night. Founder of Mehndificent Art, she only recently found art as a hobby, after it rescued her from a rough time in her life. She went on to participate in the “Raw Presents: Panorama” art show and was named the “Raw Dallas Visual Artist of the Year” in 2014.

Her goal in launching the website, Mehndificent.com, is a means to sell her work and communicate with her fans. She plans on creating a line of art that focuses on empowering women through encouraging phrases and sayings to remind women that they are beautiful and can do anything they set their minds to.

“‘This is it,’ she says to herself, while staring at the blank canvas. Visions of colors and detail dance in her mind, and she hurries to decipher it from imagination to reality. She loads paint onto her paintbrush and paints swirls and lines. She stands back to look at it. Something is missing. Going back for her paintbrush, she adds more to the picture. Standing back again, she frowns. Not enough color showing. She goes back to adding. The cycle continues, until it is exactly as she pictured it. Standing back one final time, she sighs: it’s perfect. The details are her obsession; art is her passion.”

“That anecdote is a glimpse into the process I put into every painting or drawing. Because I can be such a perfectionist, I have to keep working on the piece at hand until I am completely satisfied with it. Majority of the time it is completed when I have no more room left to add any details.

There is something about painting areas of color and drawing intricate details that relaxes my mind and brings happiness to my soul; a peace that cannot be described. However, it was not always like this. I have only been painting and drawing consistently for the past 2.5 years.

As a kid, I enjoyed drawing, and would often takes pictures out of magazines and draw them onto computer paper. I usually did this when I was stressed or bored, but as time went on I realized that I stopped enjoying it. I tried other techniques, but none of them interested me, so I ended up taking a break from art altogether. I became busy with high school, then went on to college, graduated, became a tax accountant, and later became a wife and relocated from sunny Tampa, FL to the smoldering heat of Dallas, TX. I tried re-adjusting to life away from my family and friends, but it became a struggle. Other things happened, and before I knew it, I was on a downward spiral that only I knew about.

To everyone on the outside, everything was great. But on the inside, I wasn’t happy. I felt like something was wrong with me, like there was something missing that I couldn’t find and it was throwing everything off. I took this feeling as lack of worth and low self-esteem. My husband was absolutely great and tried his hardest to get me out of the emotional hole I was in, but it was something that I had to do on my own.

One random day, I thought about how I used to draw as a stress-reliever and decided to try again. I stumbled across a drawing tutorial, which intrigued me, and gave it a shot. Sure enough, I loved it.

Later on, I tried drawing mehndi and tribal designs and it brought me so much joy. I kept practicing and started becoming better and more confident, and eventually went on to painting. The ease and carefree manner of painting opened something up inside of me that I cannot describe, and I feel it every time I try to illustrate my thoughts with paint. After lots of practice, I developed my own style, and now have the confidence to paint or draw without prior planning. I have even been able to develop an underlying theme in each of my paintings and drawings. Since I like the style of mehndi so much, I try to incorporate a round object with fine details in it, called a mandala. In my work, this illustrates the fact that in every circumstance, there is always a positive outlook, or a reason to be thankful.

Although I mostly paint or draw for myself, I was fortunate enough to be a part of the 2014 Raw Dallas presents Panorama art showcase, and then earlier this year was titled as the Raw Dallas Visual Artist of the Year.

Four years ago, I would have never dreamed that any of this would be reality. But I’ve learned that there is a silver lining in every bad situation. My goal by the end of this year is to develop a home/office decor line that focuses on encouraging and motivating women by using phrasing and messages and illustrating them in the form of typography with mehndi or tribal designs behind and around them.

For those that are in a similar stage that I was in, my message is to never give up. You are a beautiful, smart, strong woman. If someone like me can turn their situation around, so can you. Never give up hope, because your “light at the end of the tunnel” is right around the corner. You are destined for greatness!”