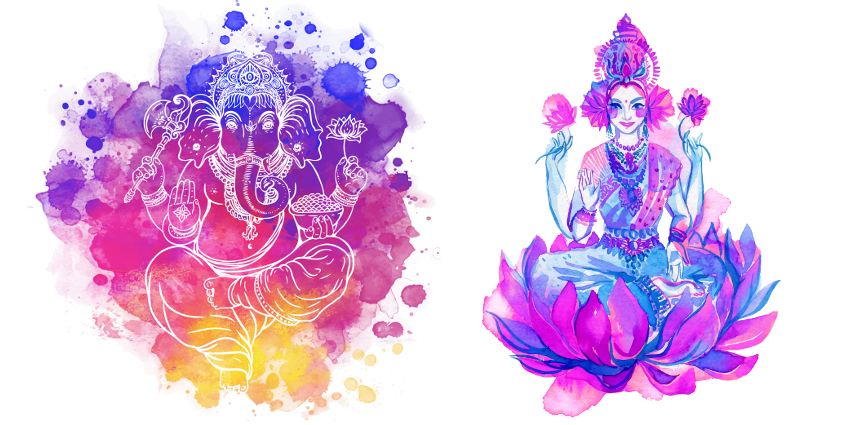 During my last semester of college at Saint John’s University, I took a theology class with Father Whalen. One day, he asked us, “If I told you that God would be here tomorrow, ready to meet with anyone who would come, right in Marillac Hall, first floor, would you go?”

The question spurred students to think about their faith or doubt, their relationship with God, their guilt or love.

I was struck by the image of God that came to my mind when he asked that question: an old White man in a suit, sitting awkwardly in one of our typical classroom desks. As a Hindu, who grew up with hundreds and hundreds of images from which I might visualize what God looks like, why did I end up thinking of an old White man?

Perhaps because that is generally what American culture tells us God looks like, aside from the occasional image of Morgan Freeman. I thought again and conjured another image, and Krishna, the beloved raincloud-dark god, came to mind. Though the image was more familiar, why again did I think of a male form?

After Krishna, I thought of Shiva, Vishnu, Brahma, Surya and Ganesha, before any female forms like Durga or Kali came to mind. Although, keeping Kali pent up in a stuffy classroom would be a bad idea for everyone. But, is God an inherently gendered word?

Regardless of religion or spiritual path, many would argue that God is genderless, or beyond the confines of the labels we superimpose on human experience.

Yet, while God is frequently referred to as male (Him, He) and even as gender-neutral (It, Their, or always using the term God or God’s), it still feels a bit jarring to hear God referred to as “She” or “Her” in colloquial speech.

Theoretically, we may readily ascribe traditional feminine characteristics to God, such as tenderness, softness, an enveloping presence, and nurturer. But something within us might bristle against thinking of God as our Mother, especially when we frequently refer to God as our Father.

At our deepest essence, we are beings beyond the construct of gender, but we occupy bodies in a world where gender matters.

We grapple with questions of sexual preference and gender identity in our public and private lives. In our religious lives, however, we may challenge traditional gender roles, such as who is allowed to teach, serve, and guide. We’ve settled into a space where we’ve grown used to God being a “Him.” “Him” even seems the same as recognizing God as gender-neutral. But what would it mean for us to feel surprised if we heard God speak, and it was in the voice of a woman?

Perhaps there is some relationship with how we think of femininity in a societal context, and the worthiness and sacredness ascribed to femininity in our spiritual lives.

Stories of the major forms of Shakti (the feminine principle) such as Durga and Kali are well-known and frequently told in Hindu frames of reference. However, when it comes to more earthly incarnations, people are often unaware of the stories of female rishis, scholars and sages, like Gargi and Lopamudra, or of spiritual seekers and poets like Mirabai and Mahadeviyakka.

In America, if a new temple is opening near you, it will more likely be a Shiva, Vishnu, Rama or Krishna temple, and is less likely to be a Parvati or Lakshmi temple.

At the same time, the issue of a gender divide is not so black and white.

While women are usually not priests in most temples (depending on the sampradaya, spiritual tradition of the temple), many places of Hindu worship and organizations have women occupying significant roles on executive committees, teaching positions, and community outreach. Women do become sadhvis or swaminis, venerated as teachers and guides in the monastic or sacred ascetic ways of life.

In the Buddhist community as well, women are gaining voices as important scholars in various branches of Buddhist philosophy, and female monasteries are increasing in prominence. Through my involvement with the Hindu Student Council, I have noticed that the majority of student leaders in college-campus Hindu organizations are young women.

Hinduism is the only major world religion that widely engages with Devi (God-as-Mother or the Goddess) within nearly all of the indigenous traditions and philosophies encompassed within its religiopolitical umbrella.

Tantric Buddhism would be a closely related group subsumed within the larger categorization of “the Dharmic traditions.” Yet, as a product of the sociocultural climate of the places we live in, Hindu women, just like many other women in society, face the same questions and subtle indicators of a lack of privilege from time to time, even in religious spaces.

For example, when an opinion a woman shares is only taken seriously once a man voices it, we are forced to wonder:

“Is this happening because I am a woman?”

This type of experience is a shared struggle for all women and is not intrinsic to Hinduism. And men do not have to think of how their gender might affect how they are perceived or how they hold themselves as often as women do.

Engaging with the Goddess is a powerful way to use religion to increase egalitarianism across the gender spectrum. If both men and women alike can see God with a feminine face, we are likely to change whichever internal sociocultural biases we have against women that might be in place. This does not mean that simply celebrating the nine-night festival dedicated to the Goddess, Navratri, makes you a feminist.

There are plenty of people who claim to worship the Devi but contribute to the abuse or degradation of women in explicit and subtle ways.

This goes beyond thinking of God as having abstract “feminine” qualities. This is also about seeing divinity present in the female body. It is empowering to hear about sacredness being associated with the female body more so because globally, female bodies are the most objectified, trafficked and abused. Loving and ascribing sacredness to a female body is a radical act. When we think of God extending a caring hand to us, we might imagine Michelangelo’s famous rendering of God’s muscular, strong hand reaching towards the fingertip of Adam. What if instead we could imagine Adam reaching for a hand strengthened with the experiences of motherhood with soft, lovely, bangles delicately slipped around Her wrist?

This does not mean that seeing God as male or genderless is detrimental to our self-perception. We just must learn to integrate these concepts in balance with seeing femininity in God. It would be just as destructive to limit our understanding of God to only one or a few feminine representations—there must always be a balance.

But, is it even important for us to think of the different ways in which God is gendered?

We understand from research in race and psychology that seeing a lack of representation of People of Color in leadership positions and in popular media can reinforce ideas of one’s otherness, invisibility, or feeling of lack of belonging. By utilizing the various forms in which Shakti manifests and exposing more people to female-centric illustrations of God, we then refuse to accept one or two stereotypical ways for females to be, and empower women with choices as to what constitutes their personal concept of femininity.

Similarly, perhaps a general reluctance in one’s religious community to name God as Mother or Goddess reinforces women’s feelings of being secondary, less important, or as a companion and not a traveler in one’s own right on one’s spiritual journey. This does not reflect that male superiority is intrinsic to any practice of Hinduism or Buddhism, nor that the religious tradition itself is hesitant to acknowledge divine femininity, but rather that like much of society, we have culturally started to place slightly more value on male portrayals and characteristics of the Divine.

I was involved in planning a women’s panel for the Dharma Conference, an event dedicated to discussing both ancient and contemporary issues across the Dharmic traditions, and many questions arose of what it meant to bring gender to the forefront of our minds in our spiritual work.

On a community or organizational level, ask yourself these questions:

2. Are women only providing support to men’s initiatives rather than leading their own causes, born from their own creativity and desires?

3. Do women feel that the work they are doing is just as important as the work that men are doing?

4. Are there female-led spiritual spaces that are well-supported by organizations?

5. Whose stories do we tell, and who is in charge of telling them?

6. Do we make a point to promote the work of female scholars?

7. Are there any of our service initiatives specifically aimed towards helping with global women’s rights issues?

8. Do we provide people or spaces in which women’s experiences of gender identity, menarche, childbirth, marital status, menopause, and other developmental issues can be discussed?

9. Are we afraid of having any awareness of tritiya-prakriti (third-gender) issues?

10. Do we truly respect the opinions and needs of children?

On a personal level, ask yourself these questions:

1. How does it feel to address God as “She” on a daily basis?

2. How does it feel to have a relationship with God like that of a mother, sister, female friend?

4. Do we see the home shrine as important as the temple, or do we see it as inferior?

5. Some may donate hundreds of dollars over the course of the year to their local temple, but completely neglect or do not even have a sacred area at home dedicated to meditation and worship. Why have we made it so?

6. Which goddesses’ spirits do we see reflected in our own personality?

Considering sacred femininity does not impose dualism on our concept of God. It allows us to even out the influences of male-dominated institutions in society and religious traditions. Across cultures and religions, we have always recognized a strong, fascinating pull from the vama-marga, the “left side” of God, feminine aspect of the spiritual experience.

It is up to us to harness both ancient and modern spiritual understandings of Shakti to aid us in the human struggles associated with gender in our world.

Ultimately, we can move humanity towards a state of dynamic equilibrium, but towards the dance of the inner masculine and feminine, an evolving balance which is not bound by gender at all.

This post was also published by our friends at Coming of Faith.

Sarika Persaud is a PsyD candidate at Pace University and General Secretary on the national board of Hindu Students Council (HSC). Visit her blog to learn more about Persaud and her whereabouts.