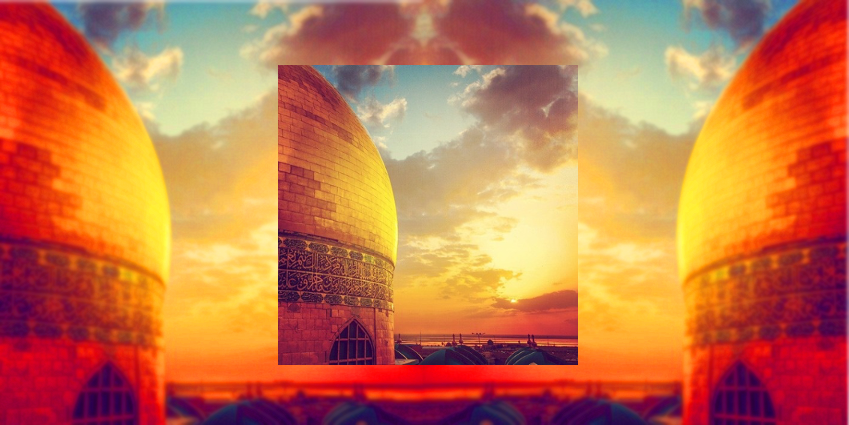 For Sunnis like me, the tenth day of Muharram is observed as a day of atonement, it commemorates the day that Musa (Moses) obtained victory over the Egyptian Pharaoh.

The Prophet Muhammad (pbuh) asked Muslims to pray on the ninth and tenth days of Muharram, known as Ashura and Tasu’a, respectively.

For Shia Muslims, Muharram signifies a time of respect and mourning.

The following 10 items are most pertinent for understanding the power behind this Shia observance.

1. Muharram commemorates the killing of Imam Hussain-ibn-Ali (A.S.), the grandson of the Prophet Muhammad (pbuh), during the Battle of Karbala. 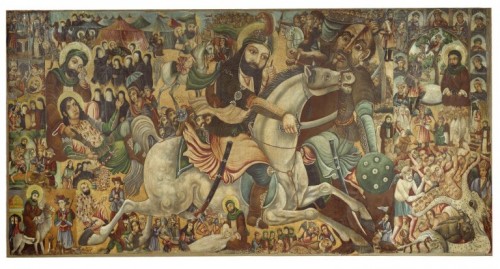 Painting commemorating the martyrdom of Imam Husayn at the Battle of Karbala, its focus is his half brother Abbas ibn Ali on a white horse [Photo Source/Wikipedia]

Imam Hussain (A.S.) was beheaded by order of the caliph Yazid-ibn-Muawiah (Yazid I), the second caliph of the Umayyad Caliphate. He disapproved of Yazid’s tyrannical rule and explicitly proclaimed that Yazid’s nomination went against the spirit of Islam. He believed that the Caliphate should uphold the teachings of the Qur’an and Sunnah, thus being vigilant in the pursuit of justice and proclaiming the truth in dedication to God. Accordingly, Imam Hussain (A.S.) refused to give his oath of allegiance to Yazid.

2. At the Battle of Karbala, on the tenth day of Muharram, Imam Hussain (A.S.), his relatives, and a small group of supporters fought against a large military faction from the forces of Yazid.

During this battle, the Prophet’s family was slaughtered, including Imam Hussain (A.S.) and his infant son. The women were taken as prisoners. The slain family members from the household of the Prophet Muhamad (A.S.), known as the Ahlul Bayt, and the supporters are now regarded as martyrs by both Sunnis and Shias.

3. According to narrations and hadith, the Angel Gabriel told Prophet Muhammad (pbuh) that the day of Ashura would befall his progeny and that his grandson Hussain would lead the army of the faithful in order to resist tyranny and revive the Islamic ummah. 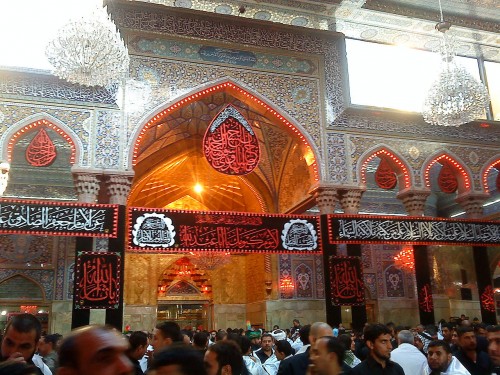 4. After the Battle of Karbala, Bibi Zaynab, the daughter of Imam Ali (A.S.), narrated the story of Karbala while she was held captive by the Yazid forces.

Her words captured the hearts of many who were appalled that their ruler could so brutally massacre the Prophet’s progeny. Bibi Zaynab’s defiance set an example for the important role of women in Islam.

5. The Mourning of Muharram is commemorated for a 10-day period, beginning on the first day of the month.

This period is observed through public expressions of grief, public processions, and majlis—sitting groups used to receive guests and discuss the tragedy of Karbala. Shias generally wear black clothing and refrain from taking part in joyous activities during this period.

6. The tenth day of Muharram, known as the Day of Ashura, is the climax of the holy period. 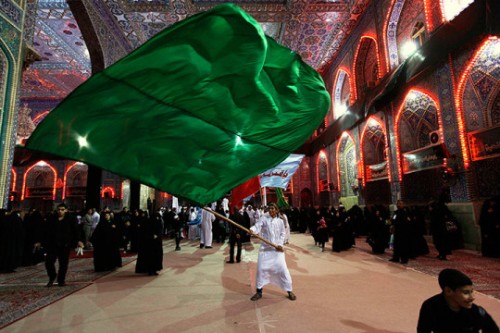 A Shia Muslim waves a green flag, the traditional colour of Islam, inside the holy shrine of Imam Hussein in Bagdad, Iraq, to mark the Muslim festival of Ashura. [Photo Credit/Khalid Mohammed/AP]

7. Most Shias show grief through a process called Lattum/Matam—weeping while beating their hands and chests—as they recite a Latmyah, a Shia lamentation through poetry.

In South Asia, the Battle of Karbala has historically served as the inspiration for a host of musical and literary genres. These include three genres of religious elegiac poetry—marsiya, soaz, and noha. Marsiya reflects the commemoration of the death of Imam Hussain (A.S.) and his supporters as martyrs, Soaz bolsters the honor of Imam Hussain (A.S.) and his family, and Noha describes how he was killed.

8. In the Indo-Persian tradition, the history of Muharram has inspired the advent of Ta’zieh theatre.

This is a form of condolence theater to re-enact the tragic fate of Imam Hussain (A.S.). These plays employ powerful displays of music and dance, and carry common themes of love, heroism, and sacrifice.

9. Many Shia observers perform pilgrimage to the shrine of Imam Hussain (A.S.) in Karbala during Muharram. 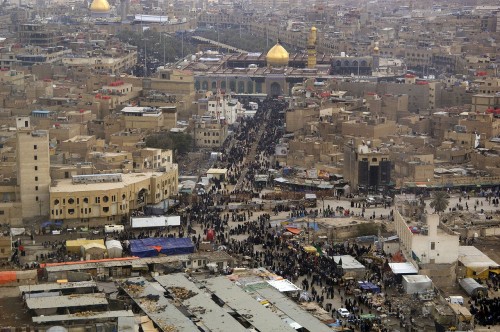 Shia pilgrims make their way to the Imam Husayn Shrine in Karbala, Iraq in 2008. [Photo Source/Wikipedia]

This is one of the holiest Islamic sites outside of Mecca and Medina. Pilgrimage is also made to the shrines of other members of the Prophet’s family, including the women of the household who carried the message of Islam after Imam Hussain’s (A.S.) death.

10. It is customary for the Ziarat Ashura, a book containing salutations to the martyrs of Karbala, to be read on the Day of Ashura.

Many Shias read this book every day to send salutations to Imam Hussain (A.S.) and all those who died with him in Karbala.

Imam Hussain (A.S.) was a figure of inspiration through his devotion to justice and his resistance to oppression. His teachings were of love, tolerance, and forgiveness, and he was killed for his inability to support a pseudo-religious political construction that threatened these foundational Islamic ideals.

As this period of mourning comes to a close, the Muslim ummah, stripped of its perceived sectarian divisions, can find powerful opportunities for reflection as we think of the current disposition of our Shia brothers and sisters across the globe. The persecution of Imam Hussain (A.S.) hauntingly parallels with the brutal persecution of Shias in the world today at the hands of so-called “Islamic” caliphates like ISIS.

While Shias mourn the murders of Imam Hussain (A.S.) and his family, the Islamic community as a whole can surely reflect on how these realities have hardly changed with respect to “Islamic” powers acting in contravention of Islamic teachings and similarly persecuting those who refuse to pledge allegiance to them.

As I write this, our religious kin are being persecuted for their perceived otherness, resulting in one of the largest refugee crises in world history. Muharram is not just the commemoration of tragic history. It is a reminder of the evil that still exists around us.