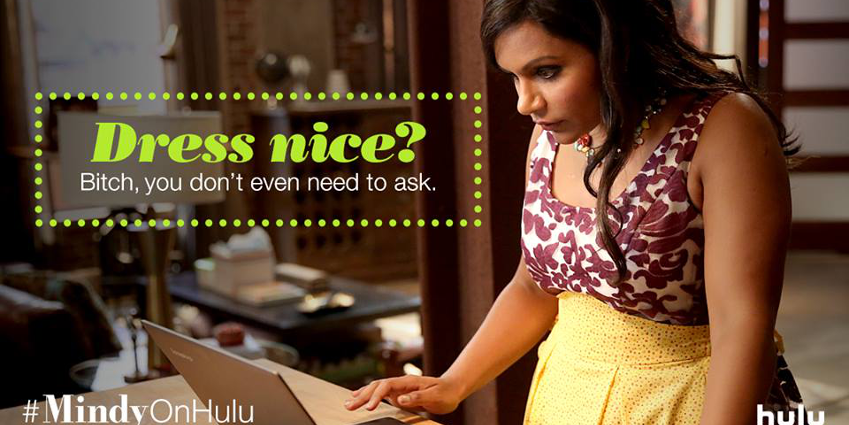 We all know that when Mindy Lahiri sets her mind on doing something, she does it with great style. That’s exactly what happens during this episode when Mindy tries to be a trendy stay-at-home mom.

So what exactly does Modern Mominista suggest?

Step 2: Clean the house with all organic products.

Step 3: Get your duck out of the oven after coming back from your five-mile run.

Meanwhile, at Schulman and Associates, Jeremy has implemented a new system for communicating to the employees—an intercom. While he’s busy blabbering away through the new device, Jody Kimball-Kinney tries to employ the help of his coworkers to set up his sister, Collette, with a date for their grandfather’s wedding.

Everyone in the office knows that Collette is gay, except for her brother. She has been hiding her sexuality from him and doesn’t think that he will accept her for who she truly is. So, in order to appease Jody, she asks Morgan Tookers to pretend to be her boyfriend.

And, it would seem as though Jody isn’t the only male on the show to not understand one of the women in his life, Danny Castellano doesn’t seem to know how hard it is for Mindy to stay-at-home all day while he gets to leave for the clinic. So, Danny takes on the challenge with open arms and at first it seems like Danny can do no wrong.

He bakes a pie, cleans the apartment, and even makes an amazing dinner. Mindy is awe-struck at Danny’s ability to pull it all off until she finds out that he got his mom to help him out with cleaning the house and taking care of baby Leo.

Collette, in her own search for misguided help, is still pretending to be Morgan’s girlfriend. And, when Mindy notices this, she pulls Collette aside to ask her what’s going on. Colette confesses that she’s only pretending to be the girly girl that her brother has always wanted her to be, so Mindy brings out her inner Oprah and gives some great advice.

She tells her that she shouldn’t have to hide her true self. Colette heeds Mindy’s words and finally comes out to her brother (through the office intercom of course) and he is shocked at first but in the end accepts her for who she is.

At this moment, Mindy realizes she needs to follow her own advice and rushes home to share her own truth. However, right when Mindy is finally ready to “come out” and tell Danny that she wants to keep working at the clinic, Danny finds out that his dad has a heart attack.

[Read Related: Meet the Parents: Mindy and Danny Bring Home Their Son in ‘Leo Castellano is My Son’]

Mindy suggests that Danny go to California and tend to his father while she goes back to work and Danny’s mom takes care of baby Leo.

The end of the episode is dramatic, but I think it invites a lot more excitement to come in the following episodes.