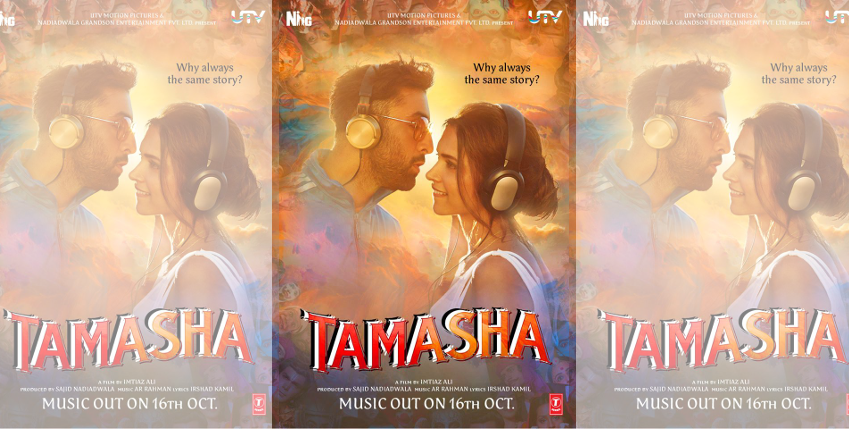 The tagline for Imtiaz Ali’s upcoming film “Tamasha” is simple: “Why always the same story?” It clearly evokes a purpose, an agenda, a mission for the audience and for itself.

“Tamasha,” releasing on November 27, aims to be a new kind of Bollywood romance, but why is the film’s first trailer reminiscent of so many love stories we’ve seen in the past? It’s an intentional move, and a clever one at that.

“Tamasha” stars the fan favorite, new-age Bollywood couple Ranbir Kapoor and Deepika Padukone. Obviously we know they have lots of on-and-off-camera chemistry, and we know they’re both great actors in the industry, so it’s a no-brainer to put them together for the first time with Ali. Not to mention, both actors have made hit films with him individually (“Cocktail” does not count as Ali only wrote the screenplay for that film).

The trailer opens with Kapoor’s character Ved telling his father a familiar story: A man lives the same routine, boring life. He goes to work, he comes home, the cycle goes on and on. But things change when a thousand miles away, this man meets a woman and their big romance begins. But as many Bollywood romances, this love story has to have some kind of twist when the lovers finally return home. Sometimes it’s that they don’t realize their families are feuding, sometimes the woman’s parents have already found her a husband by the time she returns home from her vacation. In this case, it seems the love story could be doomed from the start as Ved and Padukone’s character Mona decide to lie to each other while on vacation, but they end up falling in love with those lies. When they return home, they realize each other’s true identities.

From here we see similar shots to other Bollywood romances. But what the trailer for “Tamasha” does well is, give us just enough of an evolution of the traditional Bollywood story to keep us interested, then Kapoor and Padukone’s performances draw us in.

The story could be something we’ve seen before, and the trailer definitely has moments we’ve seen before, but somehow all of these similar elements make for something brand new. And maybe that’s the point of “Tamasha.” Maybe even if Ved wants to tell a new tale that doesn’t automatically remind him of the classic and — let’s face it — cliched relationships documented in tales decades and centuries old, in the end a good love story will always similar elements. But there will always be something just different or fascinating enough to keep us coming back for more.