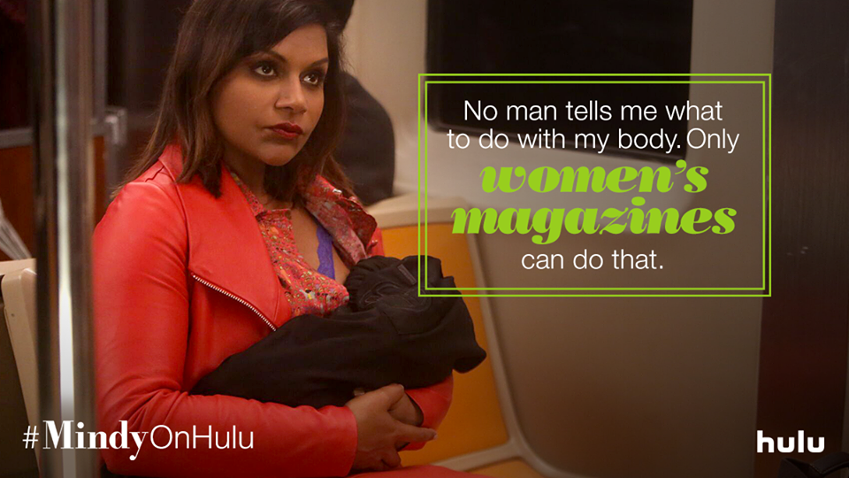 During last week’s “The Mindy Project” episode, “The B*tch is Back,” Mindy Lahiri debates on whether or not she should start working again since her maternity leave has ended.

Mothers around the world know just how hard it is to balance work and raising children. Mindy points out how TV shows and movies make having it all seem so easy, but one common mom issue she faces is breastfeeding in public—particularly when she’s on the subway with Leo and a Southern gentleman ridicules her it.

[Read Related: Meet the Parents: Mindy and Danny Bring Home Their Son in “Leo Castellano is My Son”]

Mindy is enraged by the man’s stance on public breastfeeding and doesn’t apologize for her actions (go, Mindy!). Later that day, she finds out that the same man from the subway is Jody Kimball, the new doctor at Schulman & Associates, her OBGYN practice. Mindy loses it and even begins to wonder if coming back to work is really worth it if she has to face him every day.

Meanwhile, Danny Castellano consults Beverly Janoszewski and Tamra Webb on what he should get Mindy as a “push present.” His original plan to surprise her with a dance routine is quickly squashed, so instead, he buys her a cranberry turtleneck, which is also a bad idea as Mindy gives the present to Morgan Tookers immediately.

As Danny struggles to find the right gift, Mindy is scheming ways to get Jodi fired. She uncovers a sexist remark that he made to one of his patients and rushes to the staff meeting to confront him. Jodi is unbothered by Mindy calling him sexist and even agrees that he is.

So, how does Mindy choose to respond?

She flashes him and accidentally squirts breast milk in his face, then she announces that she’s quitting her job and heads home.

Back at home, she rethinks her decision and realizes that she does want to officially get back to work and prepares to tell Danny, who from the start of the episode was encouraging her to be a stay-at-home mom. And, just as she’s about to explain herself, Danny whips out his new tattoo of Leo’s name on his chest and tells her just how happy he is that she’s going to stay at home and be there for Leo—and he is especially happy since he never got to experience this when he was growing up.

[Read Related: Mindy Lahiri and Danny Castellano Have a Baby in “C is for Coward”]

Unable to dishearten and disappoint Danny, Mindy plays along that she wants to stay at home. The two lovebirds hug it out and the episode ends with the audience left wondering if Mindy will be able to tell Danny how she really feels about staying home.

What do you guys think? Should Mindy be a stay at home mother, or go back to work? What would you do?

And, don’t forget to catch the new episode tomorrow on Hulu.