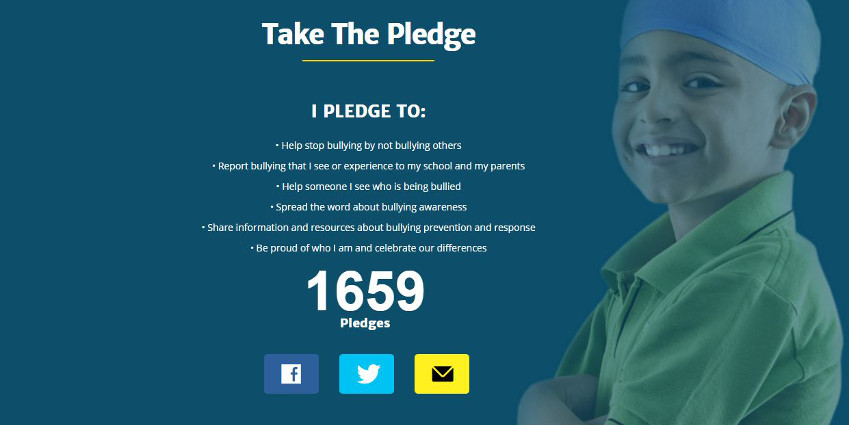 In fourth grade, my class’ tables were set up in groups of four. It was meant to build a sense of camaraderie and promote teamwork in our classroom. However, a white student I sat next to took a special interest in our supposed “differences.” This was the first time I was bullied with snide remarks, which were constantly aimed at me.

The bullies remarks were primarily comments on my facial hair, skin color, clothes and everything  else about me that did not fit the norm. He told me that my “skin was the color of shit” and that I looked like a man because of my “mustache.” Other times, he commented on my “unibrow.” He even thought my “weirdly big eyes” were something to point out.

Those comments not only came from him, but from others too. It was because I was vegetarian and they couldn’t fathom why I didn’t eat meat or why the food I bought to lunch was so different. One time a kid asked to try on my jacket and sniffed it saying “it smells like Indian people.” To this day, I still wish I had responded by sniffing her jacket and saying it smelled like white people.

When I was in elementary school, students could not understand how I could be born in the U.K. and still be Indian. They would nag me about this and ask me how I was Indian because they thought it was hilarious that I had no response.

How does one even respond to such a question?

I also spoke a differently than other kids did, because I couldn’t yet pronounce my R’s and had remnants of an accent. Naturally, it was insanely funny to repeat words I mispronounced or ask me to repeat them. Or better yet, say “what did you say? I can’t understand you” after everything I said.

I can’t remember the exact words of the chant or slur, but the white boy who sat next to me would go on and on about the bindi some Indian women wear. He would point to the center of his head and say something along the lines of “what time is it?” somehow the bindi signifying the center of a clock.

Everything I did that made me just slightly different was further amplified because of the inherent differences that I couldn’t change. It was as if those children that picked on me could smell my insecurity.

However, I learned an important lesson from all of those experiences. I learned to worry less about how I looked and embrace the aspects of my heritage, culture, appearance and personality that I could not change.

I studied hard in school and was determined to excel at everything that was within my control. It worked to my benefit because I did well and for the rest of our lives, people care more about your ability to succeed as opposed to the way you look. I attended a great college and started medical school this year. Theoretically, the things those children said to me no longer matter.

But even thirteen years later, I still have these insecurities associated with those experiences. When I interact with people who seem more “mainstream” (by this I mean white and male) than I am, I have a feeling of unease and distrust. I wonder if they’re making fun of me or dismissing me in their head because of my differences.

Sometimes I find myself unconsciously thinking about how I will never be as attractive as that white girl. Because when people tell you consistently that you are not beautiful on the outside or inside, you come to believe that about yourself— even if it’s just a little.

I still mentally high-five myself when I make a relevant contribution to a conversation about fashion or pop culture. Oh how far I’ve come from my Disney themed overalls and Children’s Place tracksuits.

When I was younger, I wish I had someone who had taken the time to talk to me about what I was experiencing. Someone who could relate and tell me how to handle it. I’m not quite sure I even have that answer now. But I want to be able to pass something along to the next generation of young brown girls and teenagers.

Don’t let your worth be dictated by what someone else tells you.

“Normal” is supremely overrated and let your voice deserves to be heard. It’s difficult to change the way people think and the opinions they hold, but keep proving them wrong. And most importantly, you’re not alone.