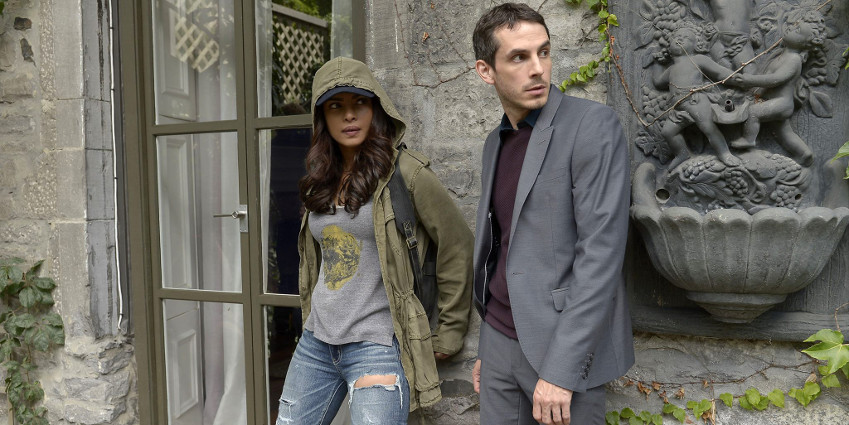 So, after last week’s episode, where Alex teamed up with Simon in the present, our protagonist finds that her father was an FBI hero at Quantico. And, we the viewer, get this gem of an episode (please apply heavy sarcasm to this sentence, thanks).

Quantico has, unfortunately, found a whole new way to be disappointing. This time, we find out that Simon, the potentially first gay New Agent Trainee (NAT) at Quantico, only pretended to be gay to get in.

Okay, gather around everyone, I’m about to teach you about why this is a scummy plot device to use. And scummy is the nicest word I have for it.

LGBTQIA+ representation on TV today is a big deal. It’s more common these days, but it’s still not common enough because many people don’t know how to write LGBTQIA+ characters. We have come a long way since the 90s, but it’s still not amazing. More so, it is important that all people, regardless if you are a person of color, low socioeconomic background, LGBTQIA+ or disabled,  are correctly represented in the media, especially because the industry is steeped in well-off cis-white male-centrism.

Back in the “Quantico” universe, Simon reveals to Elias that while he is really Jewish, he isn’t gay. Their conversation makes it obvious that Simon only claimed to be gay so that he would have more of an edge during the mandatory tests and screenings to be admitted into Quantico. This is, and again I’ll use the appropriate word, scummy because Simon took advantage of a system that is meant to make the program an equal playing field for all and used it to give himself an advantage.

Simon trivializes LGBTQIA+ people and their experiences  because while he only had to claim he was gay in his interviews and take a photo with a male stranger to bolster his claim, he also acts socially awkward, which “explains” why he doesn’t approach any guys at Quantico. 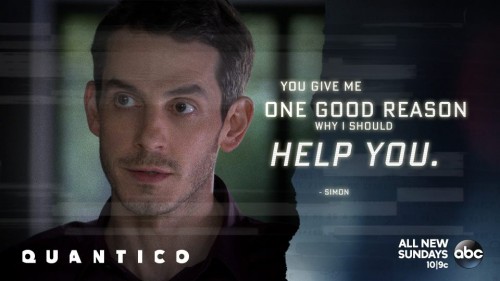 In reality, he doesn’t approach any men, especially Elias who is gorgeous, because he isn’t attracted to them, he’s attracted to women.

There is a growing suspicion that Simon is the person who planned the attack on Grand Central Station. He was the only person in the exercise last week to pick three possible candidates to kick out of Quantico, which showed viewers that while they might think Simon is a nice guy, he is not trustworthy when it counts. We also know that his glasses are fake and he either lied about going to Gaza or he has some very shady contacts that helped him get in without a paper trail.

In this episode, during the present time, we discover that one of these shady contacts can identify bomb parts and where they were manufactured. More importantly, this is the episode where we discover that Simon is acting as a double agent—he may have washed out of Quantico training program, but one of the higher-ups at made him an FBI agent in the intervening time.

He is in regular contact with the people who think that Alex is guilty and with Booth, who thinks that Alex is innocent. He has been performing a balancing act with both parties—while simultaneously, helping Alex stay ahead of the FBI and trying to maintain his position as an agent.

I doubt he’s the terrorist, though, maybe just an accomplice. Or just shady, I don’t know. He’s certainly still an interesting character, but that doesn’t mean he isn’t morally reprehensible now that we know he lied about being gay just to get into Quantico.

Another terrible event in last week’s episode deals with Nimah and Raina, who were both accepted into Quantico and are in secret training with Miranda to learn how to act as one person. It has been previously established that Miranda has a son who is in prison because he fell in with the wrong crowd, he had gunned down fellow students at his school.

We find out that the “wrong crowd”  is actually a Muslim extremist group. Miranda encourages Nimah, who had left her sister Raina at Quantico to fend for herself, to not take her twin for granted as the duo were selected to become trained infiltrators of terrorist cells, specifically the group Miranda’s son joined.

Let me get this out of the way. I am not Muslim. I have no idea what it is like to live with the prejudice of being Muslim, so I do not ever try to speak for my Muslim friends. Their stories are theirs to tell, and their voices are theirs to use or not use as they choose.

However, I am South Asian, and have been the victim of racism, so when I see racism in the media, I call it like it is. And, plainly, the reason for having Nimah and Raina in Quantico is—racist.

Nimah and Raina come from a Muslim family and wear a hijab when they are out in the field at Quantico—I have no idea what they do as full agents. We don’t know if they make it through training or where they are if they did. 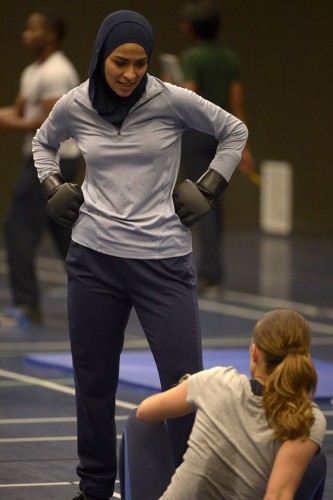 But they are visibly Muslim women from a family that seems to be fairly conservative, if Raina’s comments about how they’d only be daughters, sisters, and wives to the men in their family if they had stayed at home, are any indication.

Miranda wants to use this background to infiltrate extremist cells. She never explicitly states that they are Muslim extremists, but if that isn’t the case, what good would the hijab-wearing Nimah and Raina be to her plans to infiltrate the cells?

So, you have a set of terrorist cells. It makes sense that if you want to infiltrate them that you need spies, but Miranda only picked Nimah and Raina to be spies because they were twins and they were Muslims. They would fit in well in the cells and if one of them was killed in action, they would still have another Agent Amin to step in and pick up the slack. It tells us that Muslim women are replaceable in the eyes of the “Quantico” writers—if one dies, don’t worry guys, there are plenty more where she came from, right?!

If you couldn’t tell, that was sarcasm, again. I promise, if I was speaking, it’d be dripping from my words like hot butter.

So, we have “Quantico” continuing to play with stereotypes of LGBTQIA+ people and Muslim women.

As for the rest of the episode, Alex actually makes a mistake for once. Seriously, she has flashbacks to the night she killed her father in the middle of a hostage rescue exercise and the hostage “dies.”

Both Booth and Shelby are very worried about her, but Alex refuses to confide in them. Liam and Booth speak with her privately and tell her that while her father may have been a good agent, he was also a terrible person, so she can soothe her conscience that way.

It’s also the first time we see Alex doubt herself as an agent, which is humanizing, but Chopra’s acting is incredibly wooden—it doesn’t come across as well. It’s almost like she’s so used to overacting in Bollywood movies that when she was told she had to tone it down for Hollywood, she went in the complete opposite direction and turned it off. Maybe she just needs time to find the balance.

However, the good bits are like chocolate chips in a burnt cookie—they’re good, but that doesn’t take away from the fact that the cookie is burnt and leaves a bad taste in my mouth. Kind of like this episode.