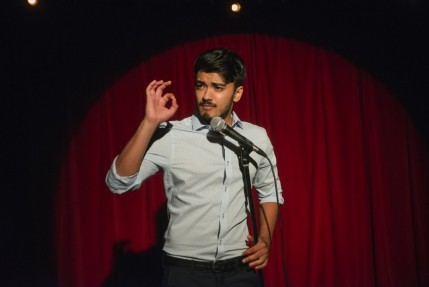 After discovering a culturally appropriate video about Australia on a bus to camp at the end of high school, it took me a while to notice that the actor doing all the accents and impressions was Indian.

At the time, I was going through a phase of researching various Indian comedians around the world and watching their material. This was the first Indian-Australian comedian I had ever come across, so you can imagine how excited I was.

Neel Kolhatkar, 21, from Sydney, Australia, has impacted Australia’s YouTube community significantly and become a global phenomenon. Since he is the first Australian comedian of Indian descent, he has inspired many other young Indian entertainers to display their talents online.

[Read Related: Here’s What Happens When the Script Gets Flipped on Indian Stereotypes]

In Australia, it is rare to have such a prominent web figure who is not white. There are only a few renowned Asians in Australia so it was a breakthrough for Australian YouTube culture when Kolhatkar began to emerge.

Kolhatkar did not realise he was going to be an overnight superstar when he released his video “Australia in 2 Minutes” in 2013. This video highlighted some of the hilarious stereotypes in Australia. The combination of the concept, ideas and impressions allowed the video to hit more than 3.4 million views to date.

For many YouTubers, the number of views their videos see defines them. But Kolhatkar is not just your average YouTube viral video sensation; he was successfully pursuing a career as a comedian in Melbourne and Sydney.

In 2015, Kolhatkar toured Edinburgh, New Zealand and the whole of Australia. Considering he is only 21 years old, this is a significant achievement for any Australian comedian.

Kolhatkar’s Indian heritage does not always play a role in his stand-up act, yet many of his fans are Indian. I think this is because Australian-Indians are extremely proud that there is finally a positive role model representing them in the media.

More often than not, Indians in Australian media have either been criminals or victims of crime. It is rare to see Indians or Asians on national television, so when a prominent figure like Kolhatkar makes his debut on the Comedy Channel, or when one of his videos is shared around the world, like “#Equality,” we take notice.

I love that Kolhatkar’s YouTube videos feature well-written and entertaining rap performances. All lyrics and ideas are written and performed by Kolhatkar himself. The raps are often satirical, but they simultaneously have a tight flow that impresses many listeners and fans.

Even though I have heard many of my friends categorize him as “the funny Indian guy on YouTube,” his multi-faceted YouTube and stand-up comedy career differentiates him.  And while Kolhatkar may not exactly fit into any specific Indian stereotypes, he is still a representative of our culture in the media.

My name is Alyssa and I have lived in Australia for most of my life. I am a Singaporean-Indian aspiring teacher who loves quirky observations people notice about Indians!