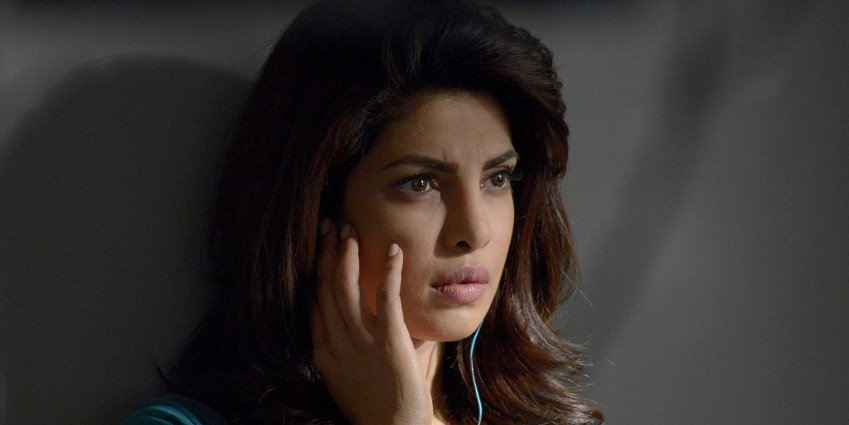 So, it looks like the theme for this episode is “Secrets have a way of coming out”, because everyone in the past and future has a secret revealed, except for Alex. Maybe we’ll find out what she was doing in Pakistan for that one year in the next episode. But it isn’t just the audience that gets to see the reveal—other people are privy to them too. That makes sense, given that their assignment in Quantico this week is surveillance.

For starters, Caleb feels something more than lust for Shelby. He’s still a jerk of the highest order, but apparently the sex is good, according to Shelby. He gets very jealous of another guy talking to her, especially when he finds out that the guy is just as wealthy as her. My guess is that Caleb falls into the “insecure guy acts like a jerk so that people don’t get to see how insecure he is” because he’s the son of two prominent FBI agents and he washed out of the Field Agent stream. We also find out in the future that his father is Clayton Haas, Deputy Director of the FBI, and the one in charge of the manhunt for Alex.

That was actually a nice twist, I didn’t see that coming.

While following Miranda as part of their surveillance assignment this week, Alex and Ryan find out that Miranda’s son, Charlie, is out on parole after being imprisoned for committing a school shooting.

We also see Liam at Miranda’s house—Liam and Miranda were in a previous relationship, and a conversation between him and Charlie tells us that Liam used to be the father figure in Charlie’s life after Miranda’s husband left them, but after a while, he also stopped coming around. Liam reveals that one of the children that survived Charlie’s attack on the school was his own daughter.

Liam’s daughter has since cut him out of her life, but he said that he’s just happy she’s alive to do that, and it gives him the chance at forgiveness. Charlie actually seemed shocked by that revelation, but he’s extremely closed off and hostile to his mother and to Liam, because he believes that they don’t trust him.

To be fair, man, your mom found a note that detailed your plans to shoot up a school, and she never had any idea about it beforehand. If I were in her position, I’d do the same thing until you could prove to me that I could trust you.

It’s also revealed on a phone call Liam makes in Miranda’s house that he had Ryan, who is already a qualified agent under probation, tracking Alex and reporting back to Liam.

Alex, who has since entered into a relationship with Ryan, is understandably enraged by this and after demanding to know if Ryan started having sex with her due to his orders (which he denied), she then asked Liam the same question for confirmation (which Liam also denied), she swapped rooms with NAT Vasquez because she didn’t want to share a shower with Ryan anymore. Well, that was over before it began.

It also foreshadowed Ryan’s relationship with Vasquez in the future. Either they live together or she’s in the habit of staying over, because they wake up next to each other.

On the same topic of Ryan, Vasquez figures out that Ryan is the one helping Alex. The phone rings while Vasquez and Ryan are in bed and Ryan claims that it is Liam. When the same number calls Ryan during a conversation with Vasquez at the command center, Liam is in his office, talking to other agents in person, so Vasquez knows it can’t be Liam calling Ryan. She seems to know that the only person Ryan would lie for would be Alex. If she knows that Ryan still has a thing for Alex and vice versa, why is she still with Ryan?

Another very big secret involving Caleb and Shelby is that in the future, they are in a relationship. Caleb has been called into the command center to look through surveillance footage and see if he can find any evidence of Alex on them. Clayton objects because he is leading the mission and it looks like nepotism if Caleb is assigned to the surveillance. Caleb also makes a comment about him being an agent. Not an analyst, an agent. Huh. Maybe when Simon washes out (and we know he will), Caleb applies to take his place?

Anyways, Simon is at the command center, to install software on the center’s computer that will allow Alex to see exactly what Caleb is doing on her own computer. Shelby is with her at the time and seems very on edge about Caleb, who is suspect du jour. Caleb has multiple windows on at the same time, and Alex sees him trash some footage without noticing what it was.

Simon distracts Caleb when he goes to get coffee, which gives Alex the chance to transfer the deleted file to her own computer. Shelby is very insistent that Alex doesn’t see the footage, but Alex does anyway—it’s footage of Shelby and Clayton kissing. Shelby looks horribly ashamed and reveals that she had been on assignment with Clayton as her handler and they had begun meeting for drinks, and then it became something more. She said that neither of them had wanted or expected it to go as far as it did and decided to spend the weekend together to see if it was going to go any further.

Shelby is revealed to have not traveled to Buenos Aires, Argentina, but had just bought the ticket. She had stayed in New York City, in a hotel with Clayton. And now, Caleb knows about the affair.

[Read Related: Can we Judge Priyanka Chopra Based on the Actions of Her “Quantico” Character Alex Parrish?]

The biggest secret that we already know about is that NAT Nimah Amin is actually NAT Nimah and Raina Amin playing one person. Simon, as we know, has a crush on “Nimah.” But the truth comes out when Simon comes to the twins’ room to pick “Nimah” up for a walk, and sees the twins in the same room.

Naturally, he freaks out, and Nimah stashes him in the closet, sitting against it so he can’t get out. Since we know that Simon is fine in the future, my guess is he got over it, but we’ll have to wait for the next episode to find out.

And finally, Priyanka Chopra has remembered that she is an actress.

Well, okay,  her anger at Ryan for lying to her was genuine and understandable. But when she’s in the future, it’s still wooden. Well, hopefully, it gets better in the next episode. The rest of the cast is still awesome. Everyone acts in the manner of normal, intelligent people and the most emotional moment is when Miranda and Charlie finally have a heart to heart 201 feet away from the school where Charlie committed his crime. Both are crying because Charlie wants his mother to trust him not to do anything stupid and Miranda needs him to understand how scared and mixed up she is emotionally, but that she still loves him and is terrified for him because of what he did.

This is a good episode. I admit it. The characters are more fleshed out, there’s more cliché than offense and there’s some great acting going on.

I hope to see more of your actual acting in the future, Priyanka!