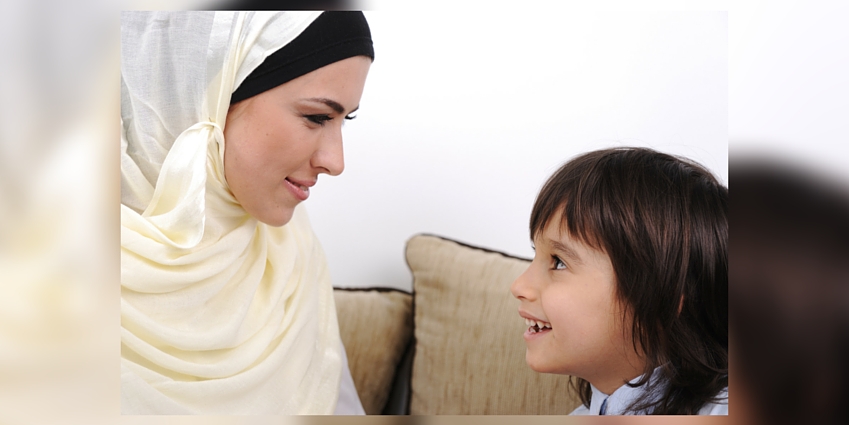 In college, I minored in socio-cultural linguistics. I learned that children with parents whose native language is not English had varying degrees of capability in picking up their parent’s native tongue. And, I learned how often a language was spoken to you, specifically, how patient and caring the person(s) was, who spoke that language with you when you were learning it, and how willing you were yourself in learning it, all play a part in becoming a bilingual child.

In preschool, I used the word “jamaan” to indicate hunger. Of course, my white, American teachers had no idea what I meant until my mother informed them of the word’s meaning. Then I got my “jamaan” every snack time. I was exposed to multiple languages growing up. Urdu, Guajarati, Arabic, English, and lastly the language of Lasan al-Dawat, which I was more exposed to after my family’s move to Bakersfield, where we began attending a Dawoodi Bohra mosque.

For many, language creates an identity. For someone like me, who struggled in learning the languages of her relatives and ancestors, and of the religious community she grew up in, these languages alienated me from the rest of the community.

Lisan al-Dawat, as you might remember from my Brown Girl series,  “The Collective Identity Of The Dawoodi Bohra Community,” is an Arabicized form of Gujarati with a heavy amount of Arabic, Urdu, and Persian mixed in. The name of the language, an Arabic term itself, means “the language of the Dawat” (the Imam led community).

[Read Related: Growing Up In The Dawoodi Bohra Muslim Community of Shia Islam]

Many in the Dawoodi Bohra community look upon Lisan al-Dawat as a bridge between the Gujarati and Arabic communities, the language of the Quran. The foremost purpose of Lisan al-Dawat is to enable the Dai to transmit Ismaili doctrine through an understandable medium, and to link the identity of leadership to their constituents. The language thus is a vehicle for the transmission of knowledge, or ‘ilm.

Lisan al-Dawat was the only language spoken in the mosque. As I grew up, I often heard religious clergy exhort that Lisan al-Dawat shoudl also be the only language spoken at home, especially by followers living in Western countries. Behind this proclamation, laid the fear that Diasporic communities would otherwise lose ties with the culture, faith and heritage inherently linked to the language.

The concept of a holy language is by no means unique to the Dawoodi Bohra religion.  For years, Catholics heard mass exclusively in Latin, and in 1964, at the second Vatican Council, they decreed that mass could be spoken in other languages.

Many times when I attended madrassa (a.k.a. religious school for Muslim kids), because of my inability to speak this language, I felt dumb and acted as though I was mute when spoken to. My American accent stigmatized me even further when I did speak it. As a result, I never felt capable of informing my madrassa teachers of my thoughts. If I used English, my native language, I was scolded for doing so.

When I was in high-school, my family had a miya-saheb (religious scholar/teacher) stay with us during Ramadan (Muslims fast during daylight hours during this holy month) to provide theological discourse to the entire community. One day, while my family and he were at my house, the miya-saheb asked to speak to me. I came downstairs, nervous—as I always was around religious leaders—and sat beside my father on the couch in the living room. I hoped he wouldn’t ask me any questions, so I wouldn’t have to embarrass myself by replying in English.

But alas, he did ask me a few questions, the content of which I can’t remember, but interestingly, after hearing my English replies, we began a conversation around languages. In particular, he brought up his concern about youngsters not learning Lisan-al-Dawat, and hence not being able to understand sermons. He also felt that sermons could not be preached in English because then, as is the case for all language translations, certain nuances would be misinterpreted.

That experience was the first time I felt accepted for speaking English, and felt validated that my opinions were being heard. It was the first time I spoke English with a boldness I didn’t know I possessed in the presence of a Dawoodi Bohra clergy member. I spoke honestly to him of feeling alienated for not knowing the language and I told him that if he (and the religious order) really wanted to connect with youngsters, they would have to be open to connecting to them in the native languages Diasporic children of Dawoodi Bohras were growing up with.

Lisan al-Dawat still serves as an identity marker within the Dawoodi Bohra community, but not for me, never for me. I’m not the only one who feels this way. I have had conversations with many others who claim they barely understand the contents of the sermons. I find it understandable that the history of the language, the emphasis on speaking the language originated out of a need the community had to identify itself as unique amongst other religious communities in India. And for those Dawoodi Bohras, who no longer reside in India, the language associates Diasporic followers—by use of its Arabic script and lexicon to their Islamic faith, without loss of their vernacular heritage.

Yet, the realization that Lisan-al-Dawat formed from a variety of other languages and traditions also brings about the understanding that this particular language evolved as the Dawoodi Bohra culture evolved. It only makes sense then that as Diasporic communities move to new places, and as other languages are encountered, the acceptance of these foreign languages into the faith must also occur.

Nothing remains the same.

While newer generations become more comfortable speaking other languages pertaining to their everyday lives, the mandated requirement to speak only Liasan-al-Dawat, will only lead to the alienation and isolation of younger members within the community, I experienced this first-hand, and hope, that kids today won’t have to continue to experience this type of estrangement from their own communities.