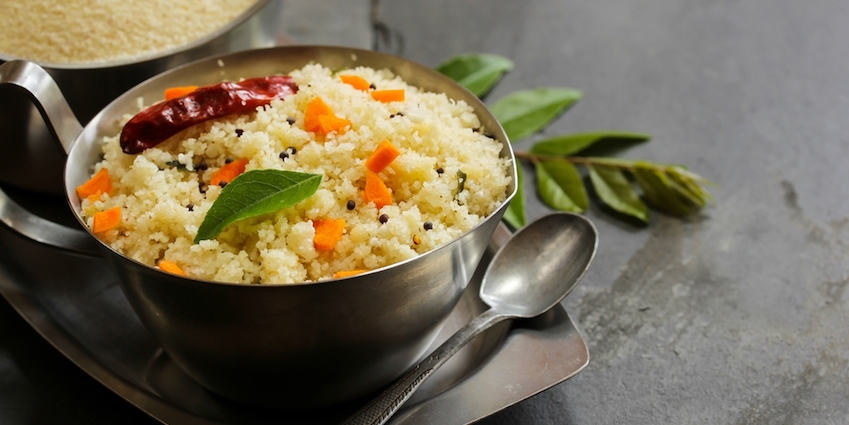 It was World Cultures Day for the fourth grade, and my entire elementary school cafeteria was food paradise: plates of cannolis, Swedish meatballs, chocolate mousse, noodles, rice and beans, and more. The sampling of cuisines satisfied every food palate and appealed to all senses.

As the rest of the school roamed around the cafeteria to taste dishes, I waited patiently next to my bowl of upma, a thick Indian porridge mixed with spices and vegetables. With no enticing aroma, colors, or appearance, the upma was left untouched after multiple uninterested glances were flashed towards it.

My mother was pleased to see the empty container when I returned home, but I could not bear to tell her the truth. Hurt and embarrassed, I had dumped one of my favorite foods in the trash.

“Why couldn’t I have been born Italian, French, or anything other than Indian?” I asked myself.

This incident, along with growing up being teased for sporting henna on my hands or coconut oil in my hair, made me want to separate my identity as an Indian-American into two distinct terms. I was “Indian” around those who looked like me, and I acted as “American” as possible around those who did not. But no matter how painstakingly I followed the latest fashion trends or pop culture icons, questions about my unfamiliar religion or gasps of shock when I did not receive an A on an assignment were constant reminders that I would always be considered “the Indian girl” amongst my peers.

Maybe they were right: having been trained in Indian classical dance since the age of three and spending most of my time in my religious and Indian communities, I only ever knew how to be Indian—or so I thought. But with relatives in India unable to understand me due to my American accent and my parents suggesting that I do not share the same cultural values as them because of my “American” taste in clothing, food, and music, I struggled with defining my identity as I did not seem to fit either category.

Focused on fulfilling my parents’ dream of making the most of my educational opportunities, I sailed through high school without giving much thought to my personal dilemma. Fortunately, the University of Connecticut had a sizeable South Asian population, which allowed me to transition comfortably into college and accept the word “Indian” as a term of endearment for myself.

Dancing for Husky Bhangra, in particular, elicited a sense of pride in my Indian culture, for it was one of the most recognizable student groups on campus. It suddenly became “cool” to be from the country of saris, samosas, henna art, and Bollywood, but it did not necessarily mean people solely labeled me as Indian. I was, first and foremost, an American student who just so happened to also be Indian.

Despite not feeling many of the negative associations with my ethnicity/race any longer, I learned about the importance of continuing the race dialogue through my involvement with the Asian American Cultural Center on campus. I focused my academic work and extracurricular involvement to understand how political systems, education, and community service can promote cultural awareness and interracial cooperation.

Encouraged by a newfound respect for my heritage, I completed internships geared towards Asian Americans in Washington D.C. to gain the skills needed to navigate the political environment as a minority and make my voice heard in government. I decided to pursue a career in public service working on U.S.-South Asia politics, because if it takes many of us years to come to terms with our own identities as Americans, it will take outsiders who do not look like us even longer.