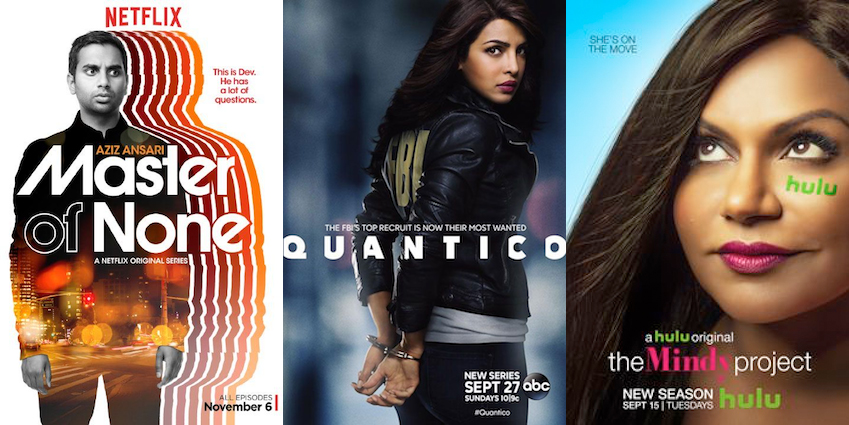 I admit it—I watch a lot of television. Part of it is wanting to be a part of every show with remotely good ratings. Another part of it is a desire to emulate Lorelai and Rory Gilmore and fill my conversations with fast-paced, obscure pop culture references. Regardless of the reasons, every fall, my list of shows grows despite my repeated pleas that I “don’t have time to get sucked into another show.” Included on this ever-growing list of shows are “Quantico,” “The Mindy Project,” and “Master of None”—shows that happen to have South Asian leads.

There are many reasons to love these shows. I love “Quantico” for its suspense and for my fascination with the setting in an FBI training camp, “The Mindy Project” for its hilarious one-liners, and “Master of None” for its wry humor.  While I do feel some comfort in seeing actors and actresses on a show that look like me, I’ve often had to defend my decisions for watching shows where I share a race with the leads, hearing things like, “You only like these shows because you’re Indian.” As if, for some reason, these shows could not stand on their own as good TV unless I shared some ethnic heritage with the actors.

All too often, shows with minority leads are seen as “niche” shows—shows that only relate to some people due to the ethnic and cultural background of the lead actors, implying that the only reason that a show with a minority main character could be appealing or relatable is due to a shared ethnicity, race, or culture.

By treating minority leads as palatable only to those who share their racial background, we are undervaluing their accomplishments as show leads, as showrunners, as writers, and as producers—as if they aren’t worthy of mainstream approval, and are only worthy of approval from those with whom they share a race.

By acting like a South Asian character is only relatable to me, and to others, because of a shared ethnic background, our value is reduced to our South Asianness—the ethnic background that makes us “other” than what is perceived as dominant and the norm. It reduces the value other aspects of our personality unrelated to our race that we may share with these characters such as falling asleep while watching Amelie like Mindy Lahiri, dreams of government service like Alex Parrish, or an obsession with pasta like Dev Shah.

Unfortunately, South Asians and other Asian-Americans are othered every day. In her book “The Making of Asian America,” Erika Lee notes that “Asian Americans are perpetual foreigners at worst or probationary Americans at best.” This othering compels many South Asians to whitewash themselves, whether as children in school or as politicians running for office, in order to assimilate and to be seen as “true Americans.”

It also means that minority leads and showrunners are often pigeonholed into only talking about issues of race, and not a diverse set of interests and ideas. Mindy Kaling herself notes that:

“There are little Indian girls out there who look up to me, and I never want to belittle the honor of being an inspiration to them, but while I’m talking about why I’m so different, white male showrunners get to talk about their art.”

Part of the othering of South Asians and other minorities on TV is perpetuated by the fact that, despite advances in diversity on screen, writers rooms continue to lack minority representation. This prevents minorities from controlling their own multidimensional narratives.

As a result, minorities end up being written as tropes, as one-dimensional characters that serve as tokens to increase the “diversity” of a show, and are often stereotyped or underdeveloped. They end up being seen as unrelatable since they only have one role or interest. Thus, at face value, when minorities are seen leading shows, it is not surprising that many feel like they are only relatable on a single dimension—their race.

This is why diverse TV shows, with diverse writers rooms, are so important. With diverse writers rooms, minority characters are well developed. They are no longer tokens—they are nuanced, relatable characters with multidimensional interests, robust storylines, and realistic interactions with the world. For example, in “Master of None,” which features a diverse writing room including Ansari himself, race is neither hidden nor the focus of the show. Race is a factor in the experiences of the characters, but not the singular or most important one – just as it is in the lives of real people of color.

[Read Related: “Aziz Ansari’s ‘Master Of None’ is a Smart, Real and Hilarious Triumph”]

Beyond our shared race, I, along with other brown girls, see myself in the characters on “Quantico,” “The Mindy Project,” and “Master of None.” I see myself in Alex’s ruthless determination. I see myself in Mindy’s hopes of balancing her career ambitions and her family. I see myself in the ups and downs of Dev’s romantic relationships. Just as their value expands far beyond their ethnic identity, I, too, am more than my Indianness.

So no, I don’t watch “Quantico,” “The Mindy Project,” and “Master of None” just because I’m Indian. I watch them because I’m so much more than that.