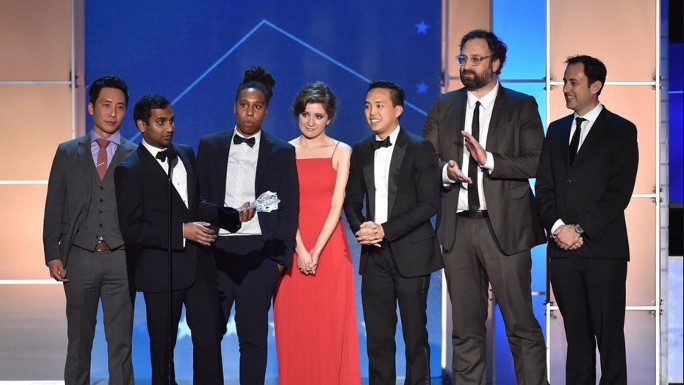 Aziz Ansari is on a serious roll. His original Netflix series, “Master of None,” dropped in November 2015 and won the hearts of audiences everywhere. And now, last week, it took home Best Comedy at the Critics Choice Awards.

This prestigious win is an achievement not only for the wonderful show but also for what it represents. As a form of acceptance and recognition, a show that represents South Asians and their life as immigrants in America through humor is being awarded and celebrated.

Show creator Alan Yang, who went up on stage along with the cast of “Master of None,” acknowledged this with a joke in his acceptance speech:

“Thank you to all the straight, white guys who dominated movies and TV for so long now, that stories about anyone else seem kind of fresh and original now.”

Ansari and Yang created this show at the right time. Diversity is expanding on television with engrossing shows like “Empire,” “Jane the Virgin,” and “Fresh off the Boat.” “Master of None” speaks to millennials—you know, the whole “Netflix and Chill” generation. It speaks to immigrants—not just Indians, but from everywhere. It speaks to the parent-child relationship (Ansari’s real life parents portray his on-screen parents too, and do a fantastic job!). It speaks to the modern romantic fairytale in the city and the complexities that arise because of careers and friendships and children. It speaks to anyone who wants to watch ten episodes to simply have a good laugh.

Though the show sounds like the usual rom-com, what makes this Critics’ Choice win special is that a few years ago, a show that featured two South Asians talking about issues such as immigration, parents, romance, careers, race discrimination, and feminism—like two normal white dudes in New York City—probably wouldn’t have become as famous as “Master of None” did.

The incredible success of the show, along with its subsequent win, also renders a second season obvious—ten more episodes of “Master of None” would open up, even more, avenues for South Asians to leave their mark. This past year alone has already been a step forward in that direction:

Priyanka Chopra’s “Quantico” has also been a breakout hit with Chopra winning the People’s Choice Award for Best Actress in a new show, another remarkable achievement.

Mindy Kaling’s show, “The Mindy Project,” was picked up for two straight seasons by Hulu and she introduced her kooky, adorable parents who, much like “Master of None,” defy the Indian-parents stereotype.

Arjun Gupta has broken norms with his roles on shows like “Nurse Jackie” and “How to Get Away with Murder”—and will now be seen in a sci-fi show called “The Magicians.”

“Sense8,” another Netflix original, showcased beloved Hindi film actors such as Anupam Kher, Purab Kohli, and Tina Desai—and their parts were even based in Mumbai.

Ravi Patel’s documentary on arranged marriages, “Meet the Patels,” was recognized for its novel approach and won awards at various film festivals.

And then there is “Master of None.”

No official renewal announcement for a second season has been made—however, Netflix knows that viewers are not very patient.