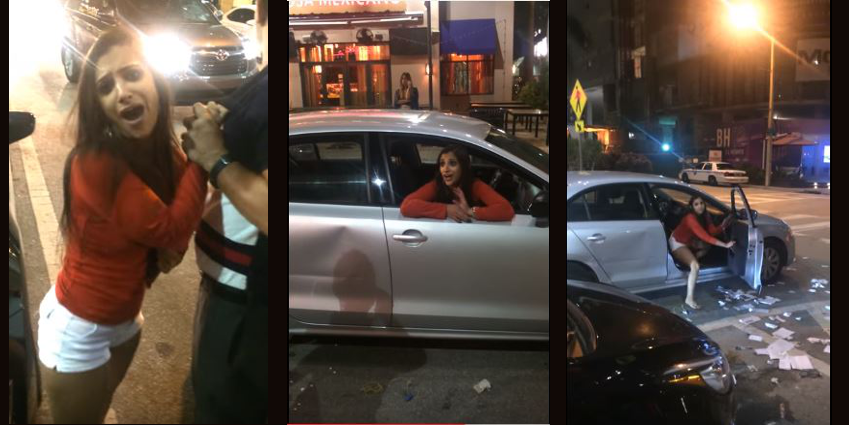 Fourth-year neurology student Anjali Ramkissoon saturated our newsfeeds last week when a video of her attacking an Uber driver went viral. The footage, showing Ramkissoon punching, kicking and hurling profanities at the driver, has received hundreds of thousands of views since it was posted to YouTube.

As expected in the age of digital mass consumption, a jurisprudential body of social media account holders took to their devices and began calling for her termination from her medical program, bolstering this with negative reviews on her professional online platforms and colourful language of their own out of outrage for her behaviour.

As a medical professional, it is quite clear that Ramkissoon is held to a higher standard than the common frat boy who drinks his body weight in beer and wreaks havoc on the town. It is also conceded that her assault of the Uber driver was a far cry from this said higher standard. Throughout the United States, state medical boards regulate physician conduct and regularly determine whether a physician’s behaviour or abilities call for a modification, suspension, or revocation of their license to practice medicine. Medical boards contain their own investigative bodies to assist with making these tough determinations.

Although laws vary from state to state, consistent examples of recognized unprofessional conduct with respect to alcohol consumption, known as impairment regulations, are limited to the sphere of medical practice (i.e.: drunken impairment while treating a patient) and do not always result in license revocation. In fact, in cases involving impairment by a controlled substance, medical boards are often privy to place restrictions on licenses while prescribing rehabilitative care or special training to target certain impairment issues. However, if Ramkissoon is suspended from her residency program (before even getting to the state medical board), she may very well be hard pressed to find a new program to complete her medical studies thus rendering her unable to complete her medical degree. At the moment, she has been suspended from her clinic, according to Jackson Health Systems, and her termination remains a possibility.

Nonetheless, the Internet, in its famed uproar, has demanded Ramkissoon’s license be immediately revoked despite the attenuated investigative and disciplinary process described above. Much more revealing, however, was the commentary that accompanied many of these cries for her termination from the medical profession—rife with racist slurs and violent rallying for her physical and sexual abuse. Some of these comments, all pulled from the original YouTube post, are provided below though similar language has been spewed on Facebook, Twitter, and on her professional platforms.

With respect to racist bigotry, a substantial variety of derogatory statements were made referring to Ramkissoon’s perceived South Asian background or Hindu beliefs.

Santa, really, you too!?

Even more disturbing, a substantial number of male commenters also thought that rape and further violent abuse would serve as an appropriate retributive justice.

Aside from the obvious issues with respect to this level of intrusion in the age of social media, and the difficult question of whether this Internet “trial” backlash was warranted, reactions like those exhibited above are quite telling of the social realities faced by, arguably, one of the most vulnerable groups of the complicated American fabric: women of color.

In terms of race relations, it has become abundantly clear that the Internet brings out both the best and the worst of humanity. This has been no exception. While it is very obvious that Ramkissoon disrespected this driver’s property and person, attacks on her ethnic identity exemplify the harsher scrutiny that people of color experience in situations of any kind of malfeasance. Remarks degrading Indians and Hindus as savages or third-world scum also exhibit that people of color are subject to collective suffering, but hardly to collective sympathy.

After the assault of Inderjit Singh Mukker, a Chicago taxi driver who was beaten within inches of his life by a teenager who referred to him as a terrorist and told him to “go back to his country,” the Internet did not flower into the level of defence that has been assigned to Ramkissoon’s Uber driver, aside from support from South Asian, Sikh, and Muslim organizations. Rather, Mukker’s story remained a headline catalogued for one day only to be lost in the archives thereafter.

Similar whispered outrage occurred when New York cab driver Barry Mamadou was shot and killed in a robbery during his shift. His life was snatched away and nothing close to viral condemnations of violence followed the release of the sad news of his death. Perhaps it is because their experiences were not captured on tape in the way this Uber driver’s had been. Maybe visualization is the key to empathy and outrage. But this flimsy foothold based on optics begs for many answers with regard to the disparity between white suffering and colored suffering, as well as white misconduct and colored misconduct. It begs for answers with respect to whether this really has anything to do with a newfound collective repulsion against physical abuse, or simply repulsion for when such abuse is perpetrated by a person of color.

In the same vein, violence against women is an oft-exhibited response to women who display breaches of some perceived code of female behaviour. The comments showcased herein calling for Ramkissoon’s rape and death are part of the norm in the realm of backlash for sensationalized and viral videos featuring women, especially women of color—a tendency that demonstrates the persistent and thriving rape culture that informs these slews of commenters who believe sexual abuse is an apt disciplinary measure for women who are too loud, too vulgar, or to anything. Truly, these remarks depict nothing more than how women have, historically, been subjugated, conquered, and humiliated—through threats and violations of our sexual sanctity.

While it is clear that Ramkissoon will be dealing with this backlash both personally and professionally for a long time coming, reactions to her violent night in Miami have made even clearer points with respect to grim race and gender relations in the U.S. and beyond. Muddy waters have become even muddier, and the phenomenon of viral sharing has rendered them almost impossible to navigate, all while affirming the golden rule of the Internet: stay away from the comments (unless you’re on Humans of New York).