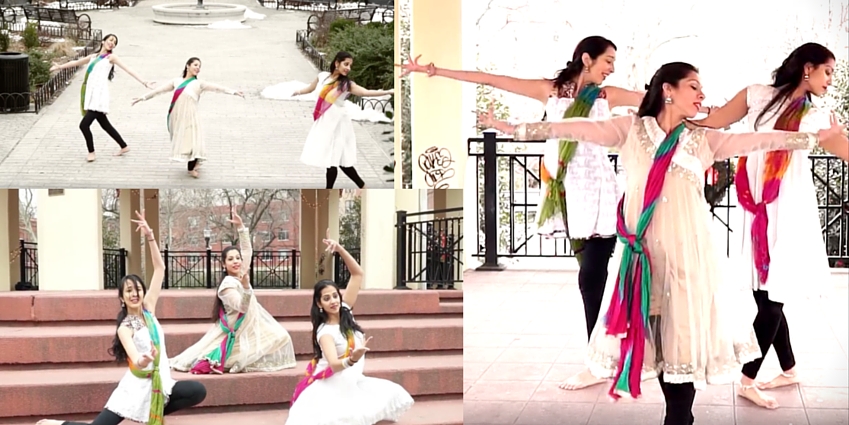 Coldplay and Beyoncé’s “Hymn for the Weekend,” continued to create a stir since it was filmed in India and depicted the country as a vibrant and mystical backdrop.

However, one dance company in New York City used classical Indian dance to spin the controversy around the song in a positive light. Using steps of the traditional Indian dance form of kathak, choreographer, and director of Bollywood Funk NYC Ayesha Khanna created a beautiful and unexpected interpretation of the song on the streets of NYC.

Watch the video below:

Our tribute to the Hymn!A beautiful hymn deserves an ode and a tribute. Here’s our dance version of the amazing and uplifting song by Coldplay. Hope you guys enjoy! :)#Coldplay #HymnForTheWeekend #DanceisUniversal

Born and raised in India, Khanna learned kathak under the tutelage of world-renowned guru Pandit Birju Maharaj for more than ten years before moving to New York City eleven years ago. There weren’t many opportunities to train in western styles growing up in Delhi, she explained, but she finally had the chance to explore the genres of jazz, modern and hip-hop, when Ashley Lobo started The Danceworx Academy, a dance studio that now has over 5,500 students all across India.

This is where Khanna fell in love with the world of fusion, so much so that she excelled in her art and began receiving offers to dance in Bollywood movies. However, life took an unexpected turn and Khanna found herself in NYC, looking for a way to reconnect with Bollywood and her culture once again.

When one of her dancers approached her asking if she saw the Coldplay video a few weeks ago, Khanna had no idea what she was talking about. That night, she listened to the song and read up on the controversy surrounding it, but for her, it was a transformative moment in her life.

“I fell in love with the song and the beautiful, uplifting lyrics,” she gushed.

To her, Beyoncé “looked like a goddess” and she couldn’t believe how artistically India was shown. Khanna was driven to dance for the first time in years.

For Khanna, “Hymn for the Weekend” and her take on it reflect the exact values and culture she has cultivated with Bollywood Funk. Firmly believing that dance, and Bollywood especially, transcends boundaries, Khanna was shocked that viewers took offense to the video in the first place.

“India is definitely much more than [what was shown in the video], but there’s no way anyone can cover everything about India in one video,” she said. “Coldplay and Beyoncé’s intention was not to hurt anyone. Bollywood has been borrowing from the West for years so who are we to say what they did was wrong? Bollywood paints a picture of America as being heaven on earth, but we know that America is so much more than that. This video is no different.”

After two rehearsals with fellow Bollywood Funk dancers Juhi Laungani and Anisha Thaker, the video was released. For Khanna, it was simply supposed to be for the enjoyment of her students and to show them how dance has no cultural or linguistic boundaries.

“I just let the music guide me and all the choreography came from a place of honesty. I didn’t want to impress anyone with hard-core choreography,” Khanna confessed.

To her surprise and delight, Khanna has received an outpouring of love and support for her classical rendition of the song.

“I didn’t know what was going to happen or if people were going to be offended,” she said. “It was a risk, but it was a labor of love.”

Based on the feedback she has gotten on the video, Khanna hopes to create an extended version of the dance with more dancers from her company and even perform it at Madison Square Garden.

“I don’t think this song is going to die down,” she predicted. The song inspired her to push the envelope and carry on vision for expanding Bollywood in America. “I want to make a difference through dance for other people. Dance is a kind of wealth you should share and pass on.”