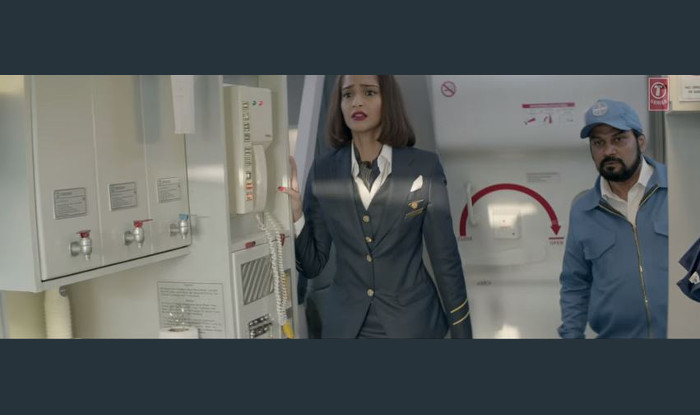 My heart aches; I’m weak in the knees, and to be honest, I’m not really sure what to feel besides being a little shaken up.

It’s not often a film evokes a range of emotions from you and for this reason, I applaud director Ram Madhvani for making “Neerja.” Madhvani and his team didn’t bring forth a Bollywood musical, as may have been expected by some, but instead an experience. It was clear from the beginning that the audience was prepared to relive the night Sonam Kapoor’s Neerja Bhanot saved the lives of the hundreds of passengers on board Pan Am Flight 73 and exemplified true leadership and bravery.

As the film began and a young Bhanot was introduced, you could already feel a lump in your throat knowing exactly how it was all going to end in just a matter of hours. Neerja was a loving daughter and a young woman with an infectious personality. Instead of creating a character, Madhvani recreated a woman who was relatable in so many ways. From reciting popular Rajesh Khanna dialogue to wanting to start life afresh after leaving behind an abusive relationship, the Neerja Bhanot we saw on screen was a woman we were all familiar with in some way.

Upon seeing the trailer for “Neerja,” I thought to myself, “Wow this looks good. But will they do her story justice?” It’s not an easy feat to accurately depict a real life event and still pay tribute to a fallen hero. Clearly, I stand corrected.

I’ll be honest—I also questioned whether or not Kapoor was capable of fulfilling a role that is so incredibly different from characters she has done in the past (i.e. “Khoobsurat,” “Prem Ratan Dhan Payo,” “Dolly ki Doli,” and :Raanjhana”). However, she proved me wrong entirely.

Kapoor’s role as Neerja was refreshing to see; her bubbly, courageous and raw performance truly embodied the persona of a woman the world was only briefly introduced to.

What I found most intriguing was Kapoor’s character development throughout each minute of the film. We saw her transform from her charming self (Laado <3) into a leader who so bravely accepted she was afraid and yet swallowed her fear to save passengers who were on the brink of death. Kapoor made everything very real and showed us a powerful performance that proved she is capable of taking on versatile roles as an actress.

[Read Related: Neerja: The Lesser-Known Story of a Girl Whose Courage Overcame her Fear]

Every aspect of this film was clearly well-researched and well-thought out. From Shabana Azmi’s role as a hopeful and grieving mother to the actors who played the traumatizing terrorists (I’m looking right at you, Jim Sarbh!), each artist took their part very seriously and made the entire experience as authentic as possible. Sarbh especially took his part to new heights and brought forth a performance that was amazingly terrifying.

And lastly, I find it important to shed light on the film’s powerful dialogue. “Neerja’s” screenwriters crafted a script that pulls at your heartstrings and leaves you thinking twice about how many of us are raised to think a certain way. Toward the end of the film, Azmi delivers a line that explains how we raise young boys and girls to believe that only men can be heroic while women look on. But she pushes that idea aside in an instant as she illustrated her daughter’s heroism.

It’s not often that I cry while watching a movie but this is one pulled the waterworks right out of me. I don’t know how else to say it but “Neerja” is a must-see film in 2016. But remember to bring a whole box of tissues with you because I’m warning you now, you’re going to need the entire thing.