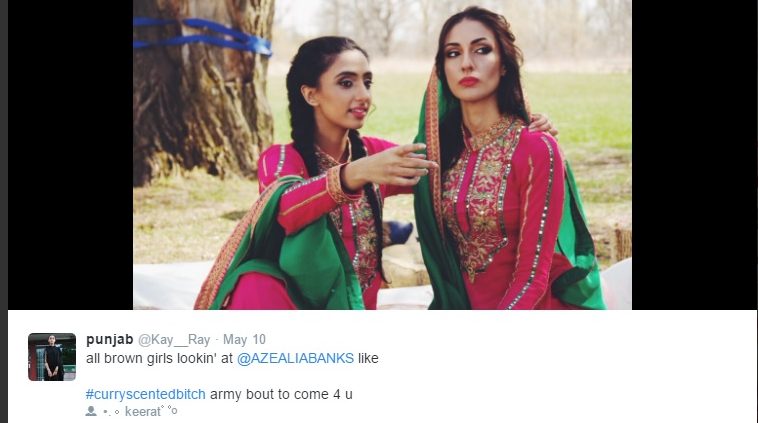 And not just for the obvious reasons, no. Of course, it’s utterly unacceptable to call a Pakistani Muslim a “p*ki” (a racial slur that originated in Britain during the 60s and is used against all South Asians) or to call one a “sandn*****” (a slur used to refer to all Middle Easterners). Coming a few days after she outed herself as a Donald Trump supporter, no one was surprised when she threw down the homophobic slur “f*****” into the mix.

But after Banks called Malik a “curry scented bitch,” desi Twitter took it as the last straw and began posting selfies of themselves with the hashtag as a way to “reclaim” the term.

Yeah, it’s nice to see so many tweets in the #CurryScentedBitch hashtag on Twitter, full of gorgeous South Asian men and women (who incidentally treated this more as an event to get dressed up for instead of a way to unify South Asians). However, a lot of South Asians who refused to take part in this event (like myself), find these slurs especially triggering considering a lot of us have been derogatorily referred to with those exact terms.

The post-9/11 experience among South Asians is not, and will never be, the same. It’s disingenuous to equate the black experience to the South Asian one, like black Muslims or Afro-Asian people don’t exist. It’s true, South Asians face racism, but it’s impossible to say black people are not facing the same racism from white people—and then experiencing intensified racism from non-black POC who use the “n” word and appropriate AAVE.

“I’m glad that the desi community as a whole, it seems, is rallying against racism. But the hashtag is triggering. We need to remember, we are not the only minorities and we must remember to be respectful of all identities and inclusive as we build social media movements. For example, I saw many gorgeous women, which was honestly great and I loved it, but we have to take into account the people who don’t feel comfortable with this trend, therefore changing the hashtag is a good way to be more inclusive.”

I suggest we change the hashtag to #ThanksBanks.

#ThanksBanks: For reigniting memories of me being bullied in school for wearing a ghagra choli.

#ThanksBanks: For reminding what it was like to be called “p*ki” by classmates.

#ThanksBanks: For reminding me of the times my white friends refused to come over to my house because they said it smelled too strongly of foreign spices.

#ThanksBanks: For reminding me of the times people have told me to “go back to where I came from,” like it wasn’t Oregon.

#ThanksBanks: For making me hate my identity just when I had began to love it.

Shanthi Guruswamy is a 21-year-old pre-med student living in the sunny beach city of Santa Barbara, Calif. She’s a member of UCSB’s only South Asian a capella team, Ravaani and sings all the time, literally. She loves dogs and rabbits and anything fluffy quite liberally.