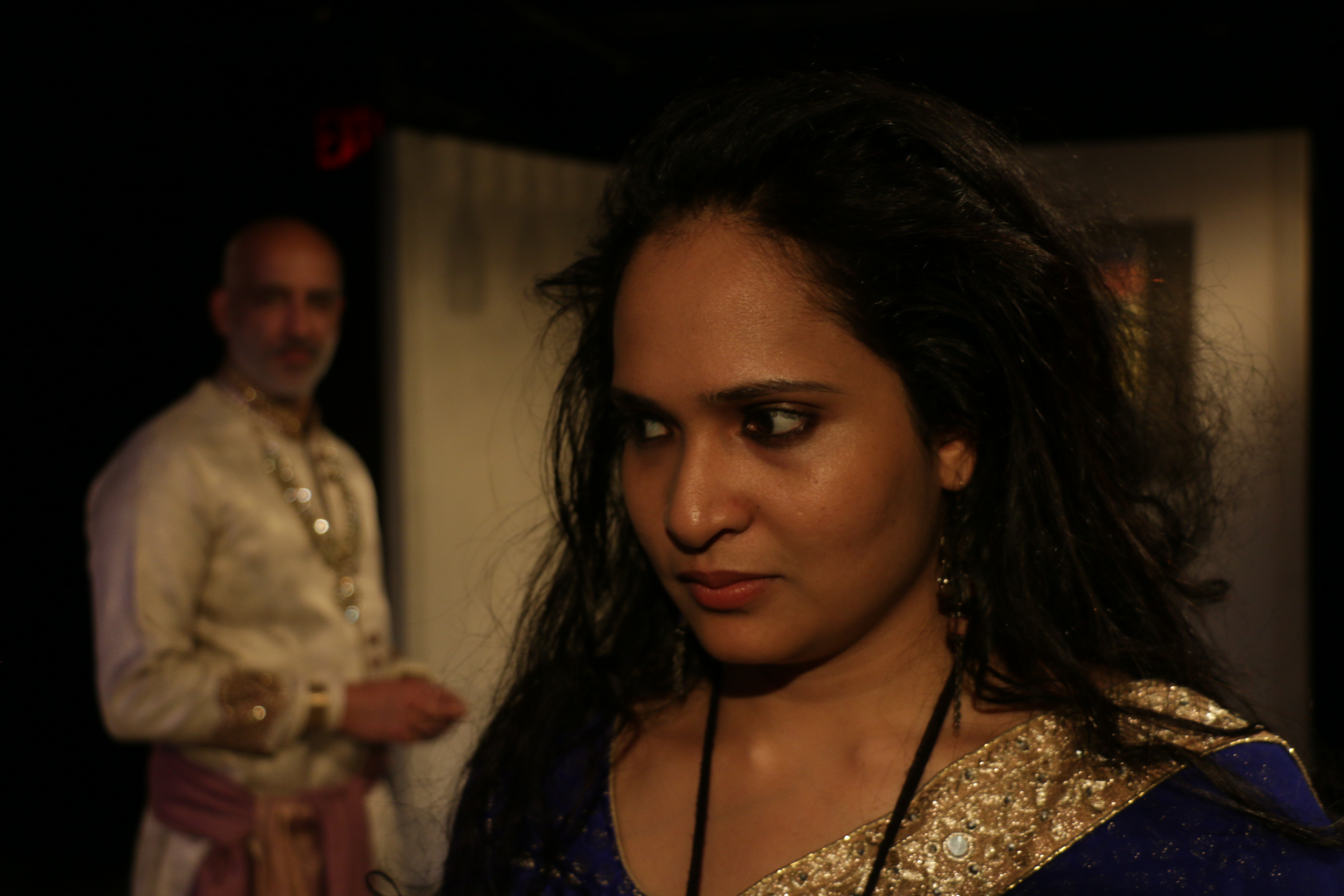 Written by Aditya Rawal and directed by Gwynn MacDonald, “The Queen” is an episode in the life of Durga, a Rajput queen in the Mughal era, who has been consigned to the west wing of the palace after her husband, King Amar, betrays her by marrying a younger woman. Within this snapshot of Durga’s life, the audience is acquainted with two other characters: her son, Prince Vir, and her servant, Laila.

Within the first half hour of the play, the audience learns that Durga is irate at Amar, not only for his nuptial betrayal but also for his betrayal toward his own kingdom. Amar has decided to side with the Mughals, the arch nemesis of the Rajputs. She tries to dissuade Amar but to no avail. What pushes her off the cliff is when Amar asks her to help him in forming this alliance with the Mughals by being present in the court as his wife because the messenger of the Mughals, King Uday, fancies her.

She is resolute in her refusal to be used as a “tarnishing trophy” and helping Amar in prostrating the Rajput empire before the Mughals. By the end of the play, the audience finds Durga resolving to burn the palace down as she finds it better to be reduced to ashes than be infiltrated by the enemy. She even takes a dagger with her to the royal dinner leaving the audience guessing if the thirst of the dagger would be quenched by the blood of Amar, Uday, or her own?

Aditya Rawal skillfully depicts the breadth of femininity through the queen’s character—a woman can be reminiscent of goddess Parvati, an epitome of love and devotion, but when wronged, the same woman can become an instrument of destruction, much like Goddess Kali.

Rawal’s screenplay also calls to attention some of the regressive behaviors of men toward women in medieval India that, unfortunately, still find their presence in today’s modern society. For instance, Amar demanding Durga to be at a royal dinner just because King Uday finds her attractive is a primal example of using women as sexual baits and objects of seduction. Resorting to coercion and punishment by men when women do not give into their “requests” is another vile behavior that is highlighted when Amar threatens to imprison Durga when she refuses to go to the dinner party.

Nilanjana Bose, in her portrayal of the queen, brilliantly captures the queen’s continuous internal battle between vanity and vulnerability. Sharvari Deshpande portrays the carefree yet assertive character of the queen’s servant, Laila, with skillful dexterity. The performances of the females in the play far outshone that of the men (Aman Soni as the son, and Alok Tewari as the king). The subpar performance of the male cast, together with patches of ambiguity in the screenplay (for instance, the obscure flashback scene) could have compromised the quality of an otherwise brilliant theatrical narrative.

Overall, “The Queen” makes for a good play to watch on a hot summer New York eve!