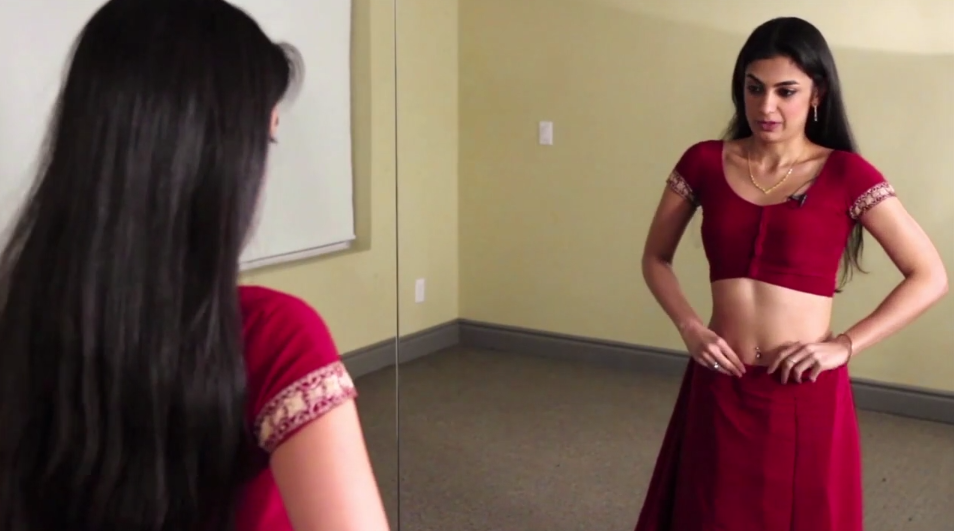 “Drape, Tuck, Pleat” was shot in Toronto last October. I came up with the idea after I realized that every time I wore a sari, I needed help from my mom or an aunty to put it on properly.

I had never even tried to drape one on my own – even with YouTube videos on the process being so accessible. If I had to go to a wedding and I had no one around to help me, I just wore something that didn’t require so many pins and folds and pleats. (You don’t need any skills to wear salwar kameezes/Punjabi dresses!)

Wearing a sari is something I do only once or twice a year, so it was much easier to get someone to wrap it for me than learn how to wrap it myself. Even my mom got frustrated when she was helping me, so what chance did I have?

I asked around and discovered many of my friends who grew up in North America can’t wrap saris on their own either. They don’t wear them every day or even every year, so why would they retain the necessary skills or build any muscle memory? I thought it would be interesting and possibly funny to see them try without any outside assistance.

I asked three willing participants to bring their own saris, and with cameras rolling, had them attempt to put them on. No instructions or YouTube tutorials were allowed, and neither were aunties. I also asked them about their personal histories with the garment – when did they first wear a sari? Did they own any saris that meant something special to them? Did people assume they already knew how to put them on?

Shetu Modi is a video producer/editor in Toronto who still can’t wrap her own sari.

Holi, Lord Krishna, and the Perfect Hues of Blue