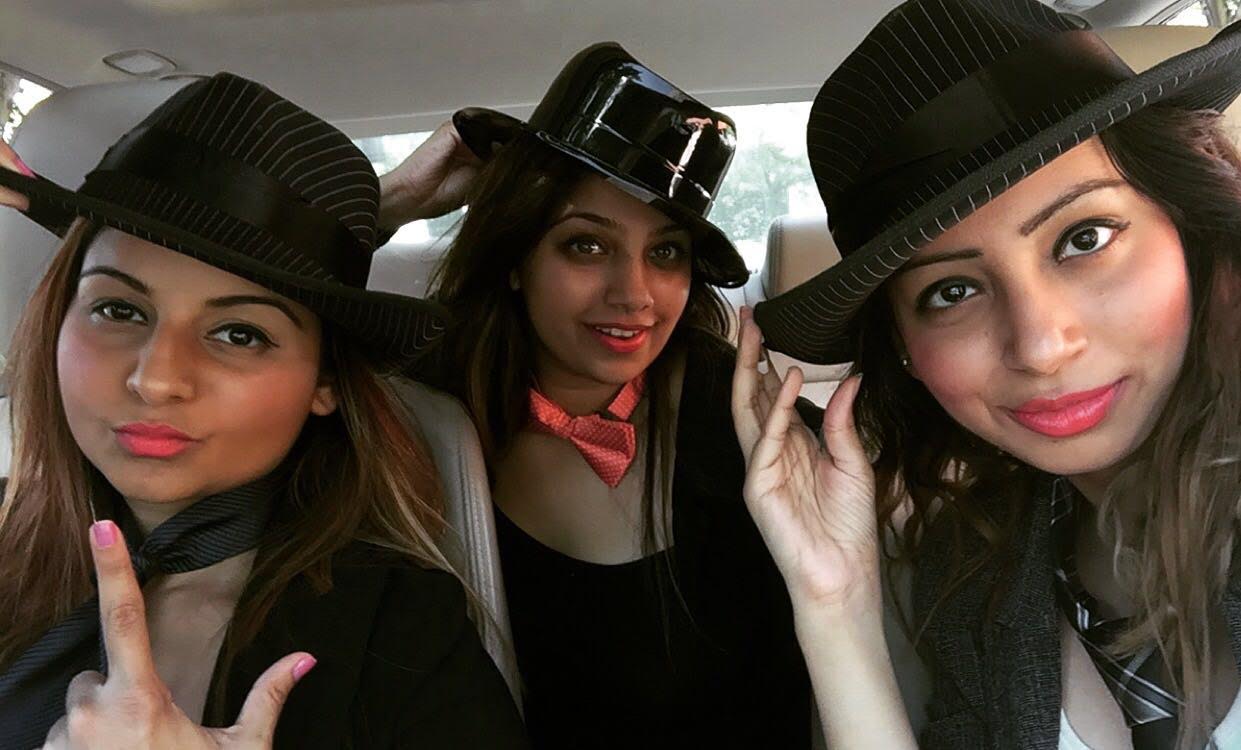 Lately, the Internet is swamped with various versions of the video  ‘Mime Through Time’ by SketchShe. The most recent remake video to go viral in the desi community is a Bollywood ‘Mime Through Time’ focusing on songs performed by actress, Madhuri Dixit—with now more than a million views!

We had the chance to speak to some of the girls as well as Rhythmaya founder and director, Nirathi Rao, about their passion for dance and what inspired them to make this video!

1. What makes you dance?

Nirathi: “We all grow up wanting to be like the Bollywood Star on the screen, so we begin dancing at a young age because it looks fun and glamorous. Then a few years down the line, we see that it is not as easy as it looks so we learn how to work hard for it and it gives us incredible focus. Then in our teen years we find friends within dance, we find energy and we find beautiful music that can speak to us in good and bad moments. And finally, we become adults and start to have our own families and new responsibilities and we see that dance brings people together, it gives us a community and it makes us feel complete in a world that struggles for peace. It helps us be the best person we can be in our day to day life. So not only do we just continue to dance, but we want to pass that creative freedom onto others, that is why schools like Rhythmaya begin.”

2. What inspired Rhythmaya to make a ‘Mime Through Time’ video?

Nirathi: “One of our youngest instructors and Troupe Dancer, Sahleen Deol wanted to do a Rhythmaya version of the ‘SketchSHE Mimes,’ and of course, being the thirty-something I am, I thought, ‘wait why are people sitting in a car dancing?’ But after looking through several video links and seeing that all global cultures were taking part in this frenzy, why not have our talented Rhythmaya dancers take a try at a remake? Especially when the majority of the work involved facial expressions and acting, something I knew our staff could pull off well. But I knew the theme had to be unique to stand out since several North and South Indian versions of mimes were already out there.”

3. Why choose pieces performed by the queen of dance, Madhuri Dixit?

Nirathi: “I talked with Sahleen Deol about several themes within Bollywood we could try. After going back and forth about leading heroines, leading  couples and comedians through time, Madhuri’s name came up in all categories. It finally struck me that she spans 30 years of acting, having an influence on several generations all at once. Just by costume changes alone, you can see how diverse her roles are from film to film. Whether it is classical, folk, or a modern dance she carries each look with incredible grace and beauty. I picked the Madhuri Dixit theme for this reason, she speaks to people of all ages and those kind of iconic stars barely exist anymore”

Sheila: “Madhuri is also known for her detailed facial expressions which this project has heavy focus on—so it was perfect match! Our dancers all have classical background where expressions are key. Which way are your eyes looking, do we lip sycn here, what direction should our eyebrow pop out, what is the mood of this song…all these had to be coordinated and decided before the filming. And of course we are all huge fans of Madhuri (who is not?) so we knew it was a piece everyone was sure to love!”

4. What aspect of filming/dancing in the video was most memorable to you?

Sheila: “When my neighbors saw us running in and out of the car with different costumes (some half on) and people would walk past us wondering what we were doing while the song was on loud and we were filming, I am pretty sure this one guy drove past us three or four times just to figure out what was going on. And of course, using the air condition as our “fan” was a major part of our special effects!”

Sahleen: “Every costume change took time but it was worth recreating those epic Bollywood scenes, which played such a huge part of my childhood and it is one of the reasons I learned to dance from such a young age onwards.”

Sheila: “We hope to continue to post more creative videos to expose our beautiful culture to those around us. We were excited when our non-Indian friends Googled Madhuri and learned more about her when our video went viral. Also, in a world where everyone wants their Internet fame we honestly did this project for fun and so happy others are enjoying it as much as we enjoyed making it at the end of the day.  It is heartwarming to see people recognize the amount of hard work and detailed research that went into this four minutes of fun!”

Nirathi: “I was excited when my 10-year-old daughter got involved and helped edit the video and then proceeded to youtube every original song and become a fan in front of my eyes in a matter of minutes. (The Disney-watching, iPad-using, techy generation is so hard to please these days.) I am happy to impose 80s and 90s bollywood culture on her for so many reasons.

We want to do more collaborations for both song and dance fusion style, to bring best of the both worlds together.

And of course, we want to grow as a school and our dance company. We have a team of about 25 dance instructors and troupe dancers who pursue wonderful careers, advanced degrees, plan their weddings, have their own children but make sure they come to Rhythmaya Dance once a week to live out their passion to give people the gift of dance. They are role models to all 250 of our students and now they can be role models to the world.”

Rhythmaya Dance takes pride in its mission focus of instilling culture and confidence into young individuals in our global community.

In addition to offering a variety of dance classes, Rhythmaya also provides special choreography workshops to fit the busy lifestyle of their clients with virtual or in-person lessons. As depicted in the video, they also have a vast array of beautiful costumes available for rental. Learn more about Rhythmaya here.