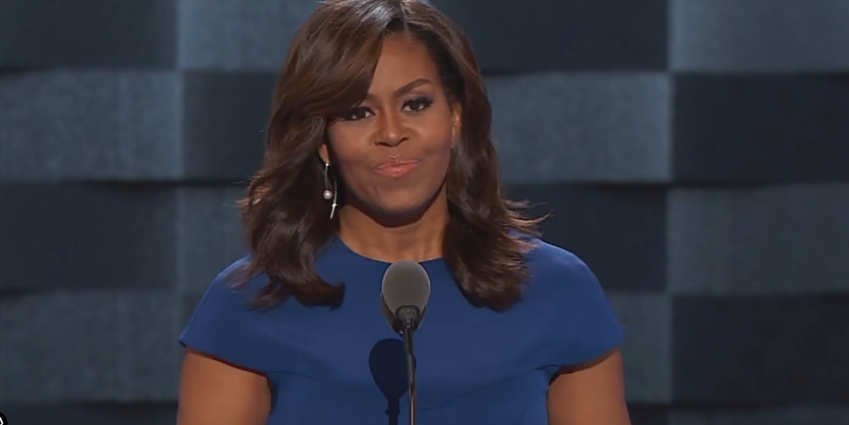 Eight years ago, First Lady Michelle Obama stood on the Democratic National Convention stage, extolling the presidential visions of her husband, Senator Barack Obama. She talked about his hopes for the future, including repairing our broken nation that was weighed down with an economic collapse. She emphasized the endless opportunities America can provide, a country where “where a girl from the South Side of Chicago can go to college and law school, and the son of a single mother from Hawaii can go all the way to the White House.”

Eight years later, on July 25, a seasoned First Lady once again was in the limelight at the DNC, no longer needing to convince the American public to elect her African-American husband, but to stress the dangers of the crossroads at which our nation stands. This time, not only did Michelle talk about the importance of the election for future generations but also took a page out of her personal storybook. A story that relates to millions of minorities, and especially, to the South Asian community.

Despite the strenuous demands of the presidency, the Obama’s have done their due diligence to make sure their daughters and family take priority over their careers, giving them a life of normalcy that over 300 million Americans enjoy.

“That is what Barack and I think about every day as we try to guide and protect our girls through the challenges of this unusual life in the spotlight, how we urge them to ignore those who question their father’s citizenship or faith. How we insist that the hateful language they hear from public figures on TV does not represent the true spirit of this country. How we explain that when someone is cruel or acts like a bully, you don’t stoop to their level. No, our motto is, when they go low, we go high.”

With these words, Michelle highlighted an issue that is far too familiar for most of us. Even though the words were meant to address the opposition’s racism and questioning of the President’s legitimacy, they were for the Jus Reigns and Waris Ahluwalias, who are stopped from flying because of the way they look. They were for the Sureshbhai Patels, who are unnecessary victims of violent policing. They were for the Ahmed Mohameds, who just want to be innovators without being labeled as terrorists. They were for our mothers and fathers who are routinely asked about their accent and imperfect English.

At that moment, the First Lady describes the United States as a place that should welcome foreigners and readily integrate marginalized groups into larger society – a place that our parents and grandparents envisioned when they immigrated to this country but is seemingly slipping away from our reach.

But, as much as she lamented on what work needs to be accomplished, Michelle also reflected on how far the nation has come, striking even more of a chord with the millions of people watching.

“I wake up every morning in a house that was built by slaves,” Michelle said. “And I watch my daughters, two beautiful, intelligent, black young women playing with their dogs on the White House lawn. And because of Hillary Clinton, my daughters and all our sons and daughters now take for granted that a woman can be president of the United States.”

While it is truly incredible for the Obamas and the black community to see them coming full circle, we South Asians, too, can be tremendously proud of the achievements we have made thus far. From blatant racism and legal restrictions on immigration to America in the early 20th century, South Asian-Americans are making waves in every neighborhood across the fifty states.

Dr. Vivek Murthy has become “America’s doctor” as the U.S. Surgeon General. Judge Sri Srinivasan was on the short list for the Supreme Court vacancy and to hold one of the most respected positions in government. The nation has its everyday heroes in people like Imran Yousuf, an Indian-American veteran who saved countless lives at the Pulse nightclub shooting last month. And for those desi girls who have dreamt of becoming the next Tulsi Gabbard or Nikki Haley, they now know that being the next Hillary Clinton is well within reach.

What Michelle has taught us is, one community’s victory is a victory for all of us. One community’s downfall is the downfall for all of us. Most importantly, she made us realize the importance of exercising our civic duty by voting. The time is now to make our voices heard and to prohibit history from repeating itself.  The time is now to help the South Asian community heal and move forward by getting those leaders who best represent our interests elected into office.

We’ll see you at the polls in November.

Watch Michelle’s remarks at the DNC 2016 below: