In the News Trending VideosAugust 2, 2016 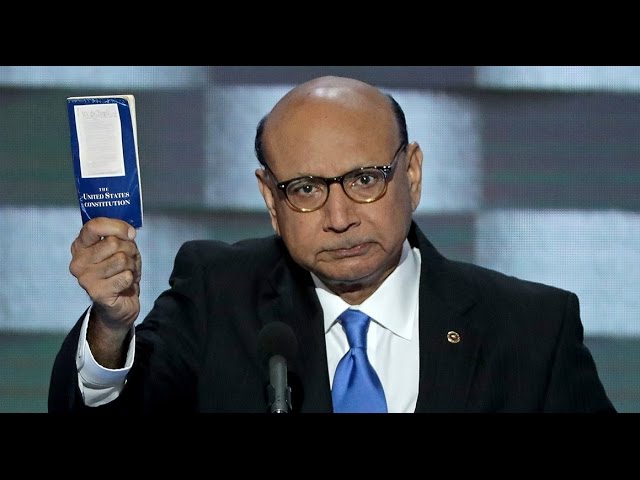 I’m not Muslim-American, but as an American, I was touched by Khizr Khan’s speech at the Democratic National Convention last week.

For those of you who don’t know, Khizr Khan was the father of Captain Humayan Khan who was killed in action by an explosive vehicle in Iraq. Humayan received a posthumous purple heart and bronze star for saving the lives of his troops. His father, Khizr, spoke at the DNC as not only a Muslim-American but as an American and someone who has lost his son on the front lines defending America. And certainly a better American than Republican Presidential candidate Donald Trump, who has initiated several anti-Muslim policy proposals, including a database to track Muslims in the United States and a potential ban on Muslims entering the United States.

“Have you even read the U.S. Constitution?” Khizr Khan bellowed as he pulled out a pocket constitution from his suit. “I will gladly lend you my copy.”

“Have you ever been to the Arlington Cemetery? Go look at the graves of the brave patriots who died defending the United States of America. You will see all faiths, genders, and ethnicities. You have sacrificed nothing and no one.”

This election has already negatively impacted Muslim-Americans across the country with a significant rise in hate crimes since the beginning of the election season and the outcome of this election will matter even more. Patriotic Muslim-Americans like Khizr and his family are doing their part to make sure everyone understands the stakes of this election. It’s up to all of us to make sure that people get out and vote, in order to stop a disastrous outcome from happening.